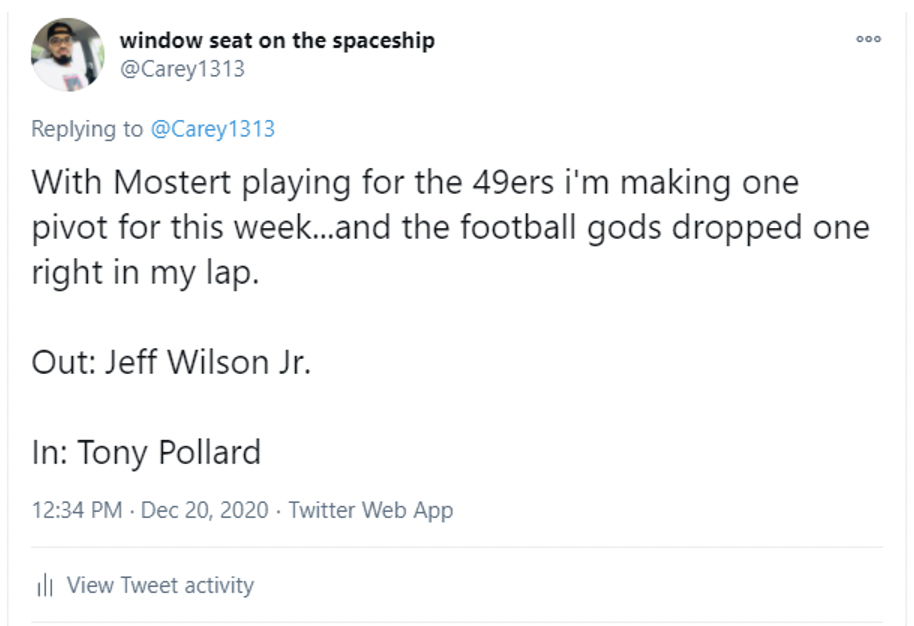 Last week was a pretty good one. Tony Pollard dropped right in our laps on Sunday morning when Zeke Elliott was a surprise inactive..and he came through with 132 total yards and 2 rushing TDs (31.20 points). DeAndre Hopkins did just what you would expect versus a banged-up Philly secondary with a 9-169-1 line (34 points).

Deshaun Watson got the game script I was expecting and he reacting in the fashion you’d expect with nearly 400 total yards and 2 passing TDs (27.42 points). Chad Hansen only had 2 catches for 55 yards, but one went for a score (13.50 points).

Brandon Aiyuk had me a little nervous for a while. He got the short TD early, but the stats weren’t coming until later in the game. He ended up with 9 catches for 73 yards and a score (22.30).

Jonathan Taylor, Mark Andrews, and Emmanuel Sanders all hit double digit points in respectable showings…leaving the Falcons Defense with 2 points as the only true disappointment.

The lineup totaled 179.12 points. A couple more breaks here and there and we could be talking about a real cash cow but if you played this lineup you likely won a little bread, but you know me…I’m looking to cash out. On to week 16.

Going right back to Watson in a better matchup than last week. While the Bengals are surprisingly right on par with the Colts as far DK points per game, they give up the 7th most yards per completion in the NFL. The Texans OL are always been a threat to throw a wrench into our plans as it pertains to the upside of this passing game but that should be far less of a concern versus the Bengals 31st ranked adjusted sack rate.

Even with Ryan Finley at QB I don’t expect this truly flammable Texans defense to nudge this game into running out the clock status…giving me good vibes about Watson snagging the 300-yard bonus to go with hopefully a trifecta of TDs or more.

This Dallas run defense is one we’ve attacked all season and that won’t change this week with the explosive Sanders coming to town.

The Eagles may not have listened to my initial displeasure with adding Jordan Howard to this backfield mix, but they’ve taken heed over the last couple weeks. Sanders held a decisive 69 to 15 snap advantage over Boston Scott last week and they were the only 2 RB’s to touch the field.

With that type of playing time, Sanders should be in line for 16+ touches regardless of game script.

Sanders’ ability to break off a 80 yarder at any moment combined with the matchup versus the league’s worst run defense make him one of the highest upside plays on the week.

The Jets will be riding high (or low depending on who you ask) coming off a spirited performance. One could argue that playing style wise they could be a sneaky bet to slow this Browns offense down in the same ways they did the Rams (Jets Def 2,000 punt play) but I’m going with the much higher odds here.

This play is another simple one…when the Browns are in control of a game, they run the ball at one of the highest rates in the league. The Jets have a middle of the pack defense, one that we are not shying away from here with 25+ carries and multiple TDs a realistic possibility for Chubb.

The hamstring and the price tag may keep others off him (fingers crossed) but Hill’s upside this week is too massive to get away from for me. Raheem Morris has done an admirable job since taking over as head coach in Atlanta but only the Seahawks have given up more DK points to WR’s than the Falcons. The 8.2 adjusted yards per pass attempt they allow is 4th worse in the NFL. Not good trends when traveling to KC to face Mahomes and company. Especially with questionable at best CB talent.

Hill probably has the least need for volume in the NFL because of just how explosive he is as an athlete…so his 12 targets per game over the last 6 games is just gluttony but i’ll be happy to join in on the feast.

Higgins figures to be one of the most appealing plays at his price range. He’s coming off a slow versus a tough Steelers defense but the Texans shaky secondary sans their top corner in Bradley Roby don’t offer nearly the same resistance.

After playing sparingly and not being targeted in week 1, Higgins has averaged 7.5 targets per game from week 2 on. That number stands to take at least a moderate jump with Tyler Boyd and his 7.6 targets per game likely to miss this game. Higgins has played 20% off his snaps in the slot this season, a number that will likely go way up without Boyd…increasing his chance at higher percentage targets.

With Deshaun Watson in this lineup to slay the hope is that slay-age leads to double digit targets for Higgins versus this bad Texans defense.

Going with another remix from last weeks lineup in an attempt to differentiate. Many will look at Hansen’s 3 target game last week in Brandin Cooks’ return to the lineup and see it as a sign of things to come, but Cooks’ absence was only a one week one. In Hansen’s first game with the Texans, he had 7 targets with Cooks’ on the field and turned them into 5 catches for 101 yards.

The sample size is small but I’m going to bet on Hansen maintaining a close enough target share to Cooks and Keke Coutee while seeing targets further down the field. He also has the best matchup facing off with the vulnerable Lashaun Sims.

Double stacking here in a good matchup for Akins. The Bengals have given up the 3rd most receiving yards to the tight end position. Akins continues to run a solid number of routes and has had 6 targets in back-to-back games…turning last week’s opportunity into 5 catches for 50 yards.

He needs to score a TD to really hit but at this low price point if he can just not outright bomb we should be fine.

Dubbed the lead runner this week by interim head coach Raheem Morris, Smith has an interesting opportunity this week. He had a team high 31 snaps compared to 31 combined for Todd Gurley and Brian Hill and his 17 routes ran were tied for a season high. Does that opportunity grow significantly?

In his most extensive run of the season back in week 12, Smith had 12 carries for 65 yards and a TD while chipping in 4 catches 10 yards on 15 routes run.

Even if his role doesn’t grow past last week, he should be on the field enough in a potential shootout to more than pay off his minimum price…but if his opportunity does grow into a full-on feature back role, he could be a must have.

This is a gross one, but I liked the lineup I was able to put together and didn’t really want to come off of anybody. Mitchell Trubisky has given the Bears a bit of life on offense since he’s returned to the lineup but a pick 6 or sack fumble for a TD is always lurking, even in games he’s playing well in.