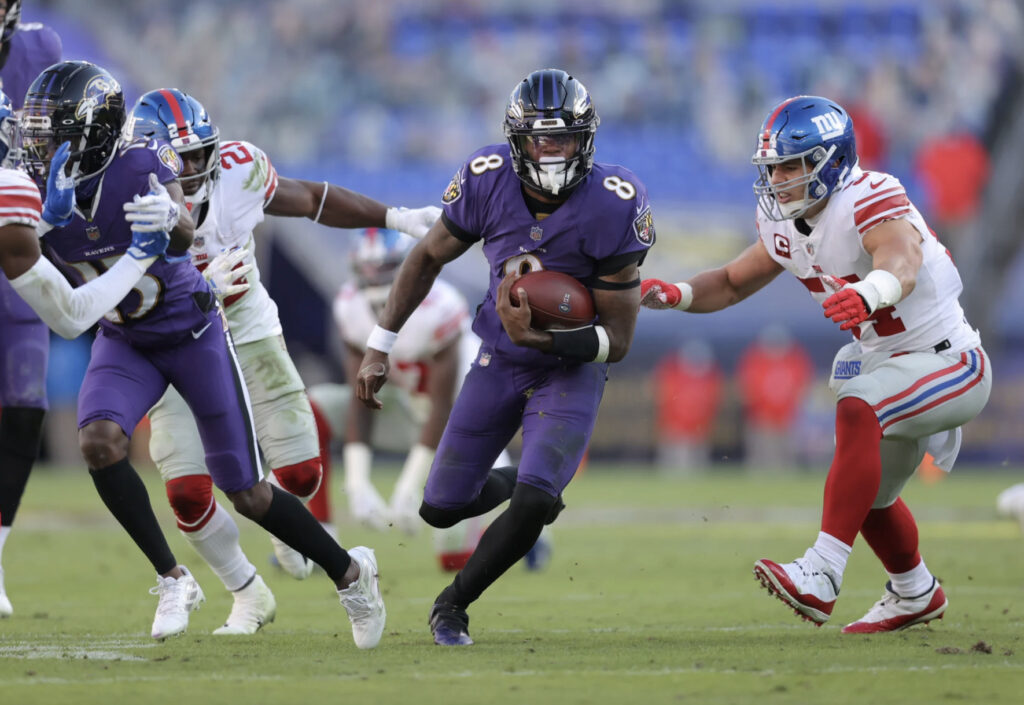 The Baltimore #Ravens control their own destiny.

Win and you're in. Time to do what Calais Campbell said and "earn the right".

Take care of business and lets go hot into the playoffs.#RavensFlock

We’re in control folks. The Ravens have dominated their last two and are doing what they can to take care of their own business.

They got some help with the Colts and Browns both losing and now sit in the 6th spot in the AFC playoff race.

It definitely seemed like the Ravens took their foot off the pedal coming out of halftime, but they had 432 yards, 25 first downs, were 8-11 on 3rd down and scored 27 points on 35:09 of possession.

This was the first drive alone:

It was a dominating offensive performance where they continually brought in a sixth offensive lineman and just smashed the ball down the Giants’ throat.

It looked like the 2019 Ravens offense that we needed to see return.

This was one of those games where the impact of Lamar Jackson had a major impact on the defense, and that alone is deserving of a high grade. The Giants played heavy zone to adjust to the recent success of Jackson’s rushing game. He took advantage early by completing easy passes paired with his electrifying legs.

He finished 17-for-26 with two scores and 80 yards on the ground. Lamar is finally looking like he did in 2019. He’s decisive and he’s not afraid to use the scramble when there are easy yards to be had. He’s also taking the easy looks and has turned the offense into the methodical unit that they built an identity around.

It couldn’t be better timing to get it together and get hot in December.

The duo of J.K. Dobbins and Gus Edwards brings back the Willis McGahee and Le’Ron McClain vibes of 2008 (of course Ray Rice was mixed in there too). They offer unique skillsets and Gus serves as a really nice complement to Dobbins. Dobbins and Edwards combined for 85 and 77 yards, respectively, while Dobbins also found pay dirt. The rushing game is finally on track, which is a significant reason why the passing game is also coming around as well. Edwards had a huge catch and run in the fourth quarter (though the drive ended when he had a fumbled exchange with Lamar from inside the five).

Major kudos to these backs for being huge pieces.

Wide Receivers and Tight Ends: B+

The theme of the Ravens right now is ‘getting hot’ and look no further than Mark Andrews for another guy that is doing just that. He did fail to bring in a TD pass that was an absolute bullet from Jackson, but he did bring in six others and he’s offering that #1 pass-catcher type of mismatch the Ravens need. Hollywood Brown brought in another score, which brings him up to four TD in his last five games, and Dez Bryant added a second straight game with a TD.

Dez may only have had one catch in each game, but hey that red zone guy is going to be a need for the playoffs if the Ravens beat the Bengals next week. You have to love the way this group is coming together. Credit Willie Snead too. He only had two catches for 24 yards, but both were beauties for first downs – another skillset you want in the postseason!

The way this unit has come together is the story of the turnaround. Their ability to run the ball so well is coming from this OL getting into the second level consistently and opening running lanes, which lets the skilled backs and Lamar use their vision and ability to make guys miss. It all starts up front. The line also kept Lamar insanely clean today. The Giants failed to take Lamar down for a sack and only had three QB hits.

I know it sounds like I’m just repeating myself…but…they’re getting hot at the right time!

Gotta give a negative shout out to Matt Skura’s snaps though. That was truly concerning. It has to be a case of the yips as there’s no physical damage to Skura’s hand. Seems to be a mental block, which might make sense after he had to address comments made to his family after the fumble disaster in NE. Either way, let’s hope Patrick Mekari is good to go for the playoffs. 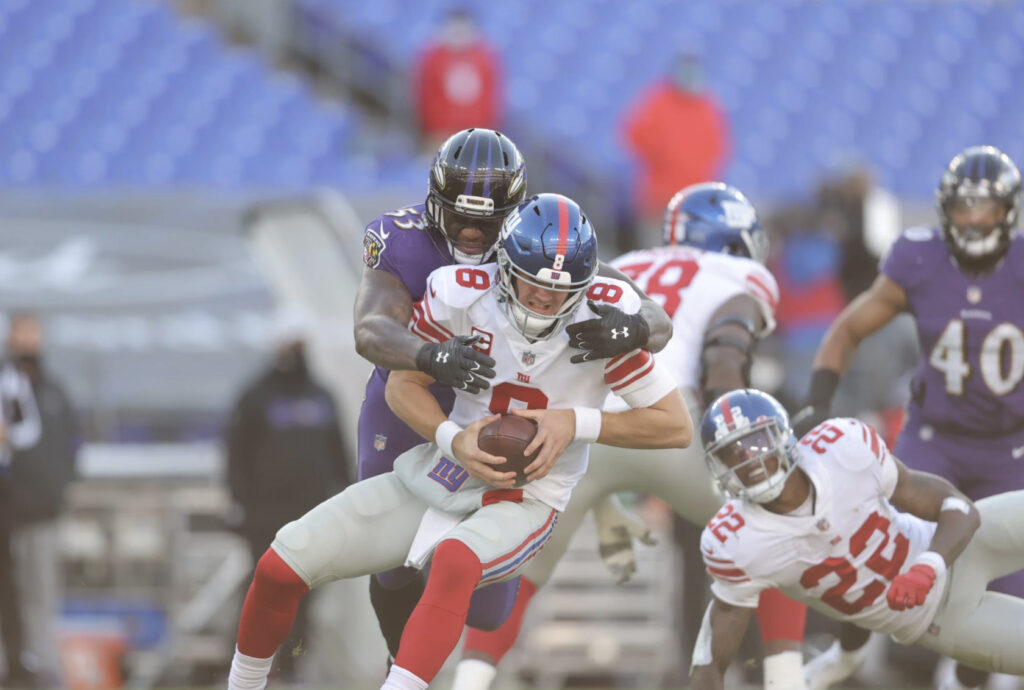 The Ravens defense played quite well and really got to Daniel Jones (11 hits, six sacks). I wasn’t overly pleased with the secondary’s coverage, but injuries can really hurt a team’s ability to play their way. Without Marcus Peters and Jimmy Smith it’s hard for them to use the press game and instead they’re opting for a more conservative approach. It’s working so it’s hard to fault them too much.

The Giants didn’t have much of a chance to establish a running game given they were playing from behind, but when they did try and run it was swallowed up by the Monstars inside, which now includes Justin Madubuike joining Brandon Williams, Calais Campbell and Derek Wolfe.

Campbell didn’t stand out on the stat sheet, but he looked much healthier and you can see him creating opportunities for other players by attracting attention from the opposing offensive line. Credit the defense around him too; guys took advantage and made plays, including six sacks.

The linebackers had a great game, especially from a pass rush perspective. Chris Board had two sacks and Pernell McPhee, Matthew Judon and Jihad Ward each added one as well.

In addition, they hit Daniel Jones 11 times and Patrick Queen got in on that action, hitting Jones twice. It’s nice to see some pass rush action finally showing up!

The DBs were long considered the strength of the Ravens defense. That wasn’t the case today, but you also have to factor in that they’re missing Marcus Peters and Jimmy Smith which are no small losses. The combination of Marlon Humphrey, Tramon Williams and Anthony Averett did well enough and mostly played a more conservative game keeping the ball in front of them and preventing big gains.

The safety combination is where I get a bit concerned. Chuck Clark and DeShon Elliott have struggled in some 1-on-1 coverage situations and it’s something they’re going to have to address before the playoffs. Remember the Titans using Jonnu Smith to get an edge last year? That’s not what I want to see this year.

I’m not going to blame special teams struggles on not having James Proche, but that roster decision made no sense to me.

Don’t get me started on activating Chris Moore over James Proche.

I don’t want to talk about it. I am annoyed. That’s all. #RavensFlock

They had a few penalty issues with a roughing the punter penalty on Justice Hill and a delay of game call on a field goal, which pushed Justin Tucker out of range to kick.

Shout out to Devin Duvernay though. He did show that he can take both kick and punt return duties, but I’m not sure activating Chris Moore (who missed a tackle as a gunner) over James Proche makes much sense. Not what I would have done.

It was a masterful coaching performance by Greg Roman. He needs to show he can sustain that in a big game where things aren’t going the Ravens’ way (like in the playoff game last year), but he called a really good game for the offense and he deserves credit.

Wink Martindale also called a heck of a game and he is now generating HC buzz. I would give that an F, but at the same time I am certainly happy for Wink. He’s a real success story as a developing coach who had struggles in Denver before finding his groove in Baltimore.

One name to consider when discussing head coach possibilities: #Ravens DC Wink Martindale. He’s considered to be one of the top candidates, and this season has only bolstered that. His staff targets include #Clemson OC Tony Elliott, and former HCs Marvin Lewis and Lovie Smith.

I’m in a situation where I almost need to give it to Lamar every week, but I have to give him only an honorable mention and request seven game balls.

Why seven? Because it’s going to the offensive line including the extra eligible OL in Matt Skura (before Mekari’s injury) and Ben Bredeson (after Skura took over for Mekari).

The OL is playing incredibly well right now and is a big piece for what is sparking the entire offense.