Win And You’re In!

With their 27-13 win over the New York Giants combined with a loss by the Cleveland Browns to the New York Jets and bonus insurance, a win by the Pittsburgh Steelers over the Indianapolis Colts, the Ravens now control their own destiny. A dub over the Cincinnati Bengals this Sunday will officially punch Baltimore’s postseason ticket. The Ravens are listed as 11 points road favorites.

Lamar & Co. set the tone early on, while dominating the first half. The Ravens ran 44 plays before intermission while racking up 282 yards of offense, 155 by ground and controlling the clock for 22:38. The opening drive took 13 plays while navigating 82 yards in 8:12.

The game was really never in doubt. The only doubt was posted on the scoreboard when the Steelers were being waxed by the Colts early on, 24-7 and the Jets, being the Jets, trying to hold on to a lead at The Meadowlands over the Browns. After the game John Harbaugh claimed that the Ravens weren’t really focused on the other games that would determine their playoff fate. But Mark Andrews admitted otherwise:

“I was watching the scoreboard probably the whole game [like], ‘Oh, I’m just checking on it.’ But I checked my phone after people were talking about it. So, obviously, that’s good for us, and hopefully, we take advantage of that.”

So, the table is set. Win and you’re in. Win and it appears that the Ravens will be either a sixth-seed (facing the Bills or Steelers) or a fifth-seed (facing the Titans or Colts). The Bills host the Dolphins while the Steelers go on the road to face a desperate Browns team. It will be interesting to see how motivated the Bills and Steelers are in Week 17. But before we get there, let’s recap Week 16 for the Ravens with the Good, Bad, Ugly and The Mo Gaba.

• Lamar Jackson really seems to be settling into a groove. As a passer he showed patience and at times, pinpoint accuracy when delivering strikes to exploit soft spots in the Giants zone. His decision making has been spot on and he takes off seemingly at the optimal moment whenever scrambling. He racked up 263 yards of total offense while posting a passer rating of 111.5.

• Gus Edwards has to be the most unheralded offensive player in the NFL. Against the Giants he accounted for 122 yards of offense on 17 total touches. On the season he’s posted 663 yards rushing (5.0 YPC) and lately, largely ignored by opponents, he’s been a contributor in the passing game. His 8 catches have averaged 14.9 yards. And of course, his tough, rugged, workmanlike approach to his craft is a steadying influence.

You have to admire @GodsGiftGus13 on so many levels. You have to earn the moniker "Bus" and Gus does it every week! #PlayLikeARaven pic.twitter.com/Debxt9u0zR

• J.K. Dobbins has helped to really open the Ravens offense. His ability to split wide coupled with his speed as a motion player pre-snap, provides some distracting eye candy to opponents, much like the way the Chiefs move players around to force adjustments by the defense. Many of the Ravens offensive plays now stem from how opposing defenses respond to J.K.

• Mark Andrews had 6 catches for 76 yards although it could have been more had he made a tough play on two balls thrown his way, both of which would have gone for scores.

• Props to Miles Boykin and Willie Snead. Their efforts as blockers in the running game are invaluable and oftentimes responsible for the chunk runs. The selflessness of this pair does not go unnoticed here.

• Joe D’Alessandris’ offensive line is really the engine that fueled yesterday’s victory. They made a really tough defensive front look pedestrian and they were equally effective on the ground or by air, regularly giving Lamar ample time to set and throw.

• Matt Judon’s energy and versatility were on full display yesterday. He showed outstanding bend when sacking Daniel Jones, and his takedown of Sterling Shephard on a short pass behind the LOS and outside the numbers produced a loss of 5 yards. Just a really solid play!

• Calais Campbell looks like he’s rounding back into shape at the right time. He was a disruptive force who commanded attention from the Giants offensive line and in doing so, he freed up his teammates to make plays. Calais didn’t register a sack and only recorded 1 tackle during his 20 snaps but those stats don’t account for his massive presence in the game.

• Justin Madubuike is beginning to really come on. He registered his first career sack courtesy of a slap-rip move that would have made former Raven Trevor Pryce proud.

• Chris Board made the most of his 23 defensive snaps with 2 sacks and 2 additional QB hurries. Wink Martindale is doing a nice job of finding ways to glean a return on investment with Board. Like Gus Edwards, Board is one of those players who attracts the attention of other players and the coaching staff. Now he’s beginning to attract our attention.

• Marlon Humphrey has a knack for getting involved in plays when the assignment really isn’t his. He sees the play develop and then leaves his assignment to help take down a ball carrier. His tackling is physical and efficient with on-point technique. Yesterday he had 3 passes defensed to go with 6 tackles. He is without question the Ravens defensive MVP.

• The Ravens defense held the Giants to 1 of 10 on third down.

• Matt Skura is a tough, team-first player and he filled in admirably. But his errant snaps also remind me of baseball players like Steve Sax, Mackey Sasser and Rick Ankiel who at times couldn’t hit water if they fell out of a boat. If forced into inclement weather play and the injured Patrick Mekari isn’t available, color me concerned (see Ravens at Patriots).

• Patrick Queen, although pretty decent in coverage, still gets caught up in the wash. It’s an issue that probably can’t be addressed until the offseason with more film study and work in the weight room. He possesses massive talent but it isn’t unleashed enough because of hesitancy triggered by slower than desirable recognition skills.

• Yannick Ngakoue left the game with a thigh injury. Hopefully his second half rest was more precautionary but for now, it’s something to be concerned about.

• Chris Moore dressing over James Proche was a headscratcher. There’s no denying Moore is a very good special teams player. But why bump Proche? During his postgame interview when commenting on the contributions of Chris Board, Harbaugh said:

“He has played excellent football. He’s becoming a really good inside linebacker. Very rarely do you see the guys who excel on special teams the first couple of years and grow into that not become really good defensive players. Even offensive players; I’ll give you Miles Boykin. Miles Boykin is playing great on special teams. He’s really doing a good job. He’s growing, and it’s making him a better receiver.”

Why should Proche be any different? Why bump him for a player who has contributed little in 2020 and has a questionable future with the team?

• The Ravens coverage was very soft at times and that allowed the Giants to possess the ball for 17:29 of the second half. Of course, this could have been Wink’s choice in order to protect his nicked up secondary from further injury.

• The Ravens red zone efficiency slipped a bit, going 3 for 6.

• The Ravens were up 27-6 and the Giants were facing a 4th-and-23 from their own 22 at the 11:03 mark of the fourth quarter. The drive was kept alive by a mind-numbing lack of awareness by Justice Hill who was flagged for roughing the punter. The extended possession resulted in the Giants only touchdown of the day and a 27-13 score.

• The delay of game penalty early in the third quarter on a field goal attempt was inexcusable and cost the Ravens 3 points.

• The Ravens were penalized 10 times for 65 yards. That’s too many times to listen to John Hussey enunciate, “penalty”. 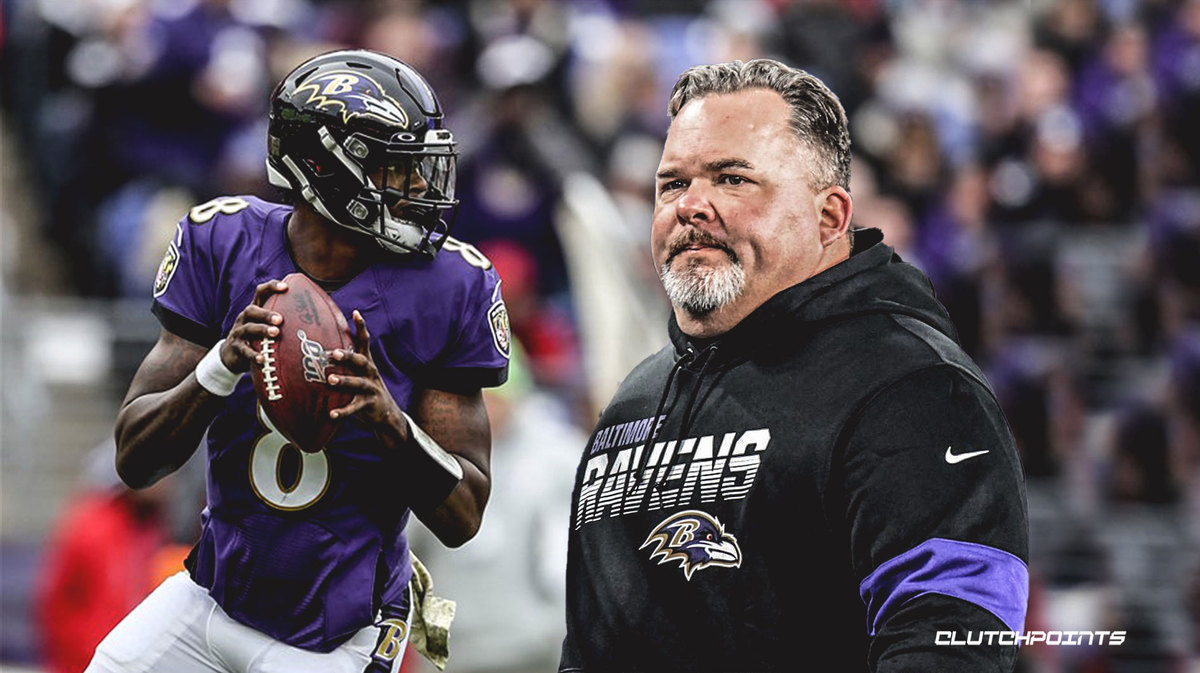 He’s been criticized often during the 2020 season and at times, the criticisms were earned. And while we judge performance on a week-by-week basis, the body of work throughout a season is a better measurement for a coordinator as things develop schematically.

After a record-setting campaign, Greg Roman hit the radar screens of teams seeking a new head coach. But he stayed in Baltimore, sometimes to the dismay of his detractors. Yet slowly, but surely, the Ravens offense is shaping up and morphing back into the road-grading machine it was in 2019. To do that without the likes of Marshal Yanda, Ronnie Stanley and Nick Boyle is remarkable.

Suddenly Ben Powers has become a poor man’s Yanda. Not that he’s performing at the same level as the future Hall of Famer but he is adeptly getting to the second level to help spring chunk runs. Orlando Brown, Jr. is playing left tackle at nearly the same level as Stanley and Roman has found ways to use Patrick Ricard and street free agent tight ends to try and fill the crucial role once perfected by Boyle.

It’s not as if the playbook is a mirror of last season’s (it actually seems more developed), but the results are approaching 2019 as of late. Roman is using more of the guard/tackle counter runs; he’s using two running backs at one time due to the speed and versatility of Dobbins; and he’s utilizing Lamar’s skills to pressure defenses while providing him with a few easy options when on the move as a passer. And the crazy thing is, it feels like they aren’t completely firing on ALL cylinders yet.

Players get on hot streaks and so too, do coordinators.

If Roman’s roll continues, it will result in more points and eventually force opposing offenses to become one-dimensional. And when that happens, we’ll see game results that look a lot like what we saw yesterday.

Today, they go together like a hand and glove!