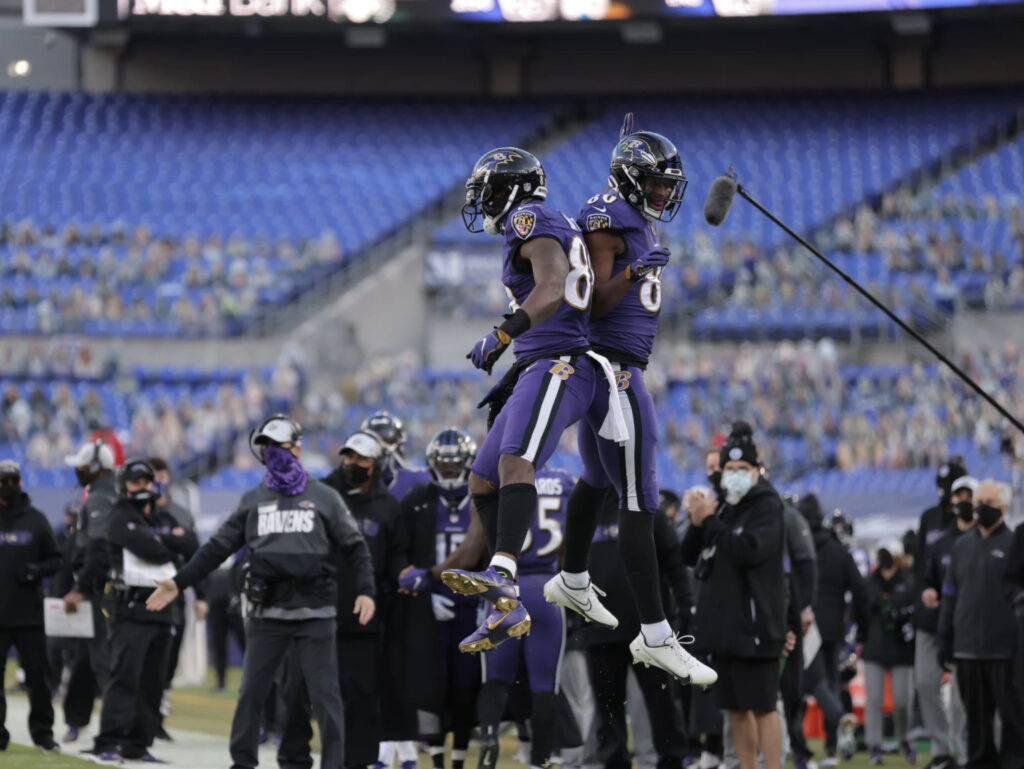 Maybe the Ravens players and coaches weren’t watching the out-of-town scoreboard, but everyone else was fully engaged.

Baltimore entered the day needing to win its final two games and just one loss by the Browns, Colts, or Dolphins to grab one of the seven playoff spots in the AFC.

Miami dampened those hopes Saturday evening with a 26-25 victory over the Raiders on a last-second field goal.

As for Sunday, it was a day was filled with drama and then elation by the Ravens.

The tension started in the fourth quarter as the Steelers erased a 21-7 halftime deficit and took the lead against the Colts.

The short-handed Browns were being … well, the Browns … against the one-win Jets and trailed by as many as 17 points.

The main TVs in the press box at M&T Bank Stadium are locked into the Ravens game.

However, some of the game-day crew in the second row have access to a remote and they were frantically flipping from the Steeler-Colts game to the Browns-Jets.

With every stomp or yell, a few media members would scramble from their seats to see what happened. The Ravens were in full control against the Giants and the theme of the story was their playoff hopes.

The Ravens’ 27-13 victory over the Giants ended before the other relevant games.

Baltimore’s coaches quickly turned their attention to the Steelers and Browns.

There was a muffled roar from the coaching booth when the Colts failed to convert a 4th and seven that gave Pittsburgh a 28-24 victory and its first AFC North title since 2017.

There was even more celebration when the Jets stuffed the Browns on a 4th and one that sealed a 23-16 win.

As a result, the Ravens jumped from the eighth spot to the sixth position in the playoffs. The Browns fell from five to seven. The Colts are currently on the outside of the race at No. 8.

Coach John Harbaugh stuck to his word and said he didn’t bother looking at the games even though the scoreboard directly faces the Ravens sideline.

“I ended up seeing the Browns’ last play walking in here in the coaches’ locker room, because the coaches had it on a phone,” Harbaugh said. “So, it’s not like we had it on TVs or anything. Like I said, we really haven’t been focused on that at all. We just figured that that takes care of itself, and we need to take care of us. And we still need to do that.”

Lamar Jackson had a similar experience.

“I pretty much found out in the locker room after the game,” Jackson said. “My reaction was, ‘We just have to keep winning.’ Like I said before, we don’t really try to lean on hoping a team loses, because it really doesn’t matter. We still have to win no matter what, and that’s what I’m focused on. I’m just happy they lost.”

The work is not even close to being finished for the Ravens.

They still have to beat a suddenly refocused Bengals team that has now won two consecutive games with quarterback Joe Burrow out for the year.

Baltimore also has to stay focused for the entire game. The Ravens had several sloppy penalties and lost a fumble in the final quarter inside the 1-yard line against the Giants.

Even though the Ravens are back in the playoff picture, there was no celebrating. They were focused on another business trip to Cincinnati to close out the regular season. That’s the proper approach because the Bengals crushed Baltimore’s playoff hopes at the end of the 2017 season.

You try not to look too far elsewhere, but we control our own fate, and that’s a great feeling,” tight end Mark Andrews said. “We’ve got to go play a really, really good [Cincinnati] Bengals team this next week and try to get better and reach the playoffs. And that’s all we can focus on – is the next game – not focus on the playoffs. We’re just trying to get better and win this game, and the cards will fall how they fall.”