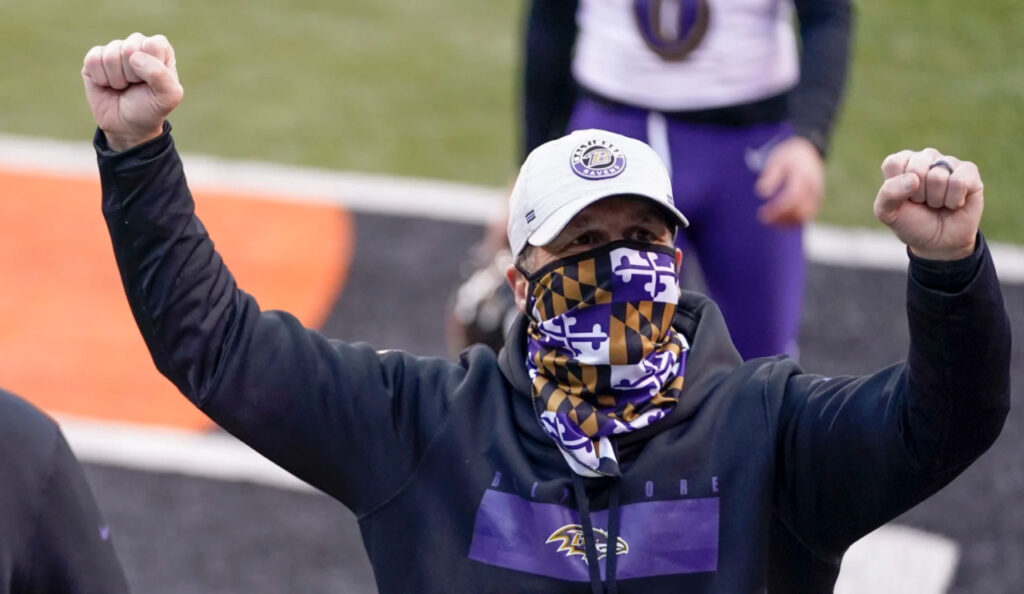 Ravens Win 38-3 to Advance to The Postseason

During the 2000 season, then Ravens head coach Brian Billick adeptly guided the team through unchartered playoff waters. He was brash and confident and carried a swagger. His team followed suit and the critics who objected to the Ravens brashness began to line up.

Billick, following a big win in Nashville over the favored Titans defended his team’s bravado with this quote that will forever echo in the annuls of Ravens history.

“When you go in the lion’s den, you don’t tippy toe in. You carry a spear, you go in screaming like a banshee, you kick whatever doors in, and say, ‘Where’s the son of a bitch!’ If you go in any other way you’re gonna lose.”

I thought about that quote again this morning while preparing to do this piece. Maybe the thought was triggered by another scheduled trip to Nashville this Sunday. But I think it had more to do with how the Ravens took care of business in Cincinnati yesterday.

They weren’t haunted by the Bengals knocking the team out of the post season mix in 2017. They weren’t overly impressed by the Bengals two-game winning streak and physical performance v. the Steelers on Monday Night football a couple of weeks prior. And they certainly weren’t intimidated by Bengals LB Germaine Pratt’s prediction. 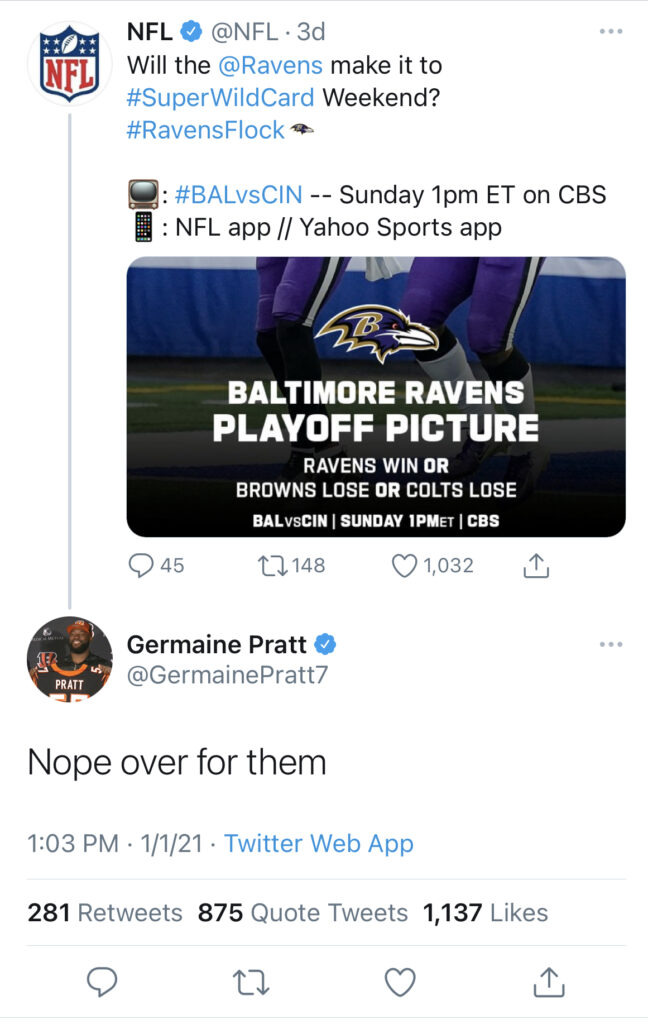 The Ravens didn’t try and get cute by exploiting the nicked up Cincinnati secondary that played without their starting corners (thank you Greg Roman). They didn’t alter their attack despite the absences of Patrick Mekari and Willie Snead. They stuck to what they do best – wearing teams down with a power rushing attack. And at the end of the day, the Ravens didn’t force their fans to hold their collective breath or pray for help from another team. The Ravens took matters into their own hands and completed a successful business trip.

• Lamar Jackson looks like he is in early-season shape. In other words, he looks fresh and invigorated, and that’s not a good sign for the rest of the AFC. He showed patience in the pocket and delivered the ball with accuracy. His 43-yard scoring strike to Miles Boykin was pure perfection and his escapability has to be maddening to all opponents.

• It’s pretty obvious that Lamar has a great rapport with Marquise Brown and the two have an ability to create plays on the fly. The ad lib component of their chemistry is a dangerous weapon when Lamar escapes containment. The pitch-and-catch besties have connected for 5 scores over the past 5 games.

• Miles Boykin is quietly coming on as a receiver and it would be no surprise if he makes some big plays during the postseason. He’ll be that guy who might get ignored by opposing coordinators and given his catch radius and improved mitts, he just might be a weapon in bloom. Props to the receiving corps for their willingness and ability to support the run game, including Dez Bryant who was not targeted once in his 23 offensive snaps.

• JK Dobbins is developing into quite a force. Given his size, he has the ability to hide from defenders and that coupled with his explosiveness makes him a big play candidate every time he steps on the field. JK’s 160 yards on an extremely efficient 13 carries should create nightmares for the Titans as they prepare for a different looking Ravens team than the one they saw back on November 22.

Good morning @GermainePratt7. Wishing you the best this offseason. But before you clean out your locker today, could you explain what #57 for the #Bengals is doing on this play? Asking for a friend who is wondering why it isn’t over for the #Ravens… pic.twitter.com/ziWITWLxFL

• Gus Edwards continues to do Gus things, making yards after contact and converting tough third and short situations. Thanks in part to Edwards, the Ravens were 11 of 17 on third down attempts and possessed the ball for 40:31.

• Tyus Bowser has made a late season push and his versatility gives Wink Martindale options. He played well in all facets against the Bengals and was one of the two players (Pernell McPhee was the other) to get a hit on QB Brandon Allen. Bowser’s recent rise might give Eric DeCosta pause when it comes to choosing which edge defenders to retain. Bowser, Matt Judon and Yannick Ngakoue are all pending free agents.

• When you get a linebacker in space, one-on-one against a speedy back, it is cause for concern for a defensive coordinator. It has the look of a lost chess move. But in the case of Chris Board v. Giovanni Bernard, Board won the battle as he stayed with Bernard stride-for-stride while executing perfect technique, utilizing the sideline as a weapon. Board has been a productive blitzer. Seeing him in space like that was pretty impressive.

Really impressive coverage from Chris Board in a tough situation that I’m sure Wink Martindale would prefer to avoid. #Ravens have to be elated with the reps they are getting from this 3rd-year UDFA from North Dakota State. pic.twitter.com/baD3EFmLhX

• Anthony Averett has played well since his return from IR. His recent battle-tested experiences will help the Ravens in the postseason in dime situations when Jimmy Smith returns. Props to Marcus Peters and Chuck Clark on a pair of athletic INT’s.

• In two games against the Bengals this season the Ravens have yielded just 6 points. Yes, it is Cincinnati but they do have a few playmakers and this is the NFL.

• Punter Johnny Townsend stepped into a pressure-packed role, one in which more could go wrong than right. Filling in for the COVID-stricken Sam Koch, Townsend was called upon not only for punting chores, but also to be the holder in the place kicking operation. Koch is arguably the best in the business. But Townsend was flawless and even averaged 50 yards on his two punts. He earned $38,522 on the day for his efforts.

• The penalties in terms of volume and consequence weren’t egregious (6 for 49 yards) BUT…can Greg Roman/Joe D’Alessandris/David Culley for the sake of our sanity PLEASE clean up these illegal formations? Ok?

* Marquise Brown’s drop might slip through the cracks in a lopsided win but he’s got to hold on to such passes in the win-or-go-home situations the Ravens will face for the balance of the 2020 season.

• The consecutive batted passes by the Bengals 6’8” defensive lineman Margus Hunt, the second leading to an interception.

When the Ravens lost Marshal Yanda to retirement, you knew it would hurt but no one understood at the time, the extent of the negative impact. Then All-Pro Ronnie Stanley was lost for the season and soon thereafter, so too was TE Nick Boyle who played a crucial role in the success of the running game. These losses coupled with the inconsistencies of C Matt Skura and his errant snaps could have pushed offensive line coach Joe D’Alessandris’ unit to extremes.

They could have buckled, yet miraculously, the surviving members of the O-line rallied together and now they’ve gelled into a line that appears to be every bit as productive as that of 2019. When you run the ball for 404 yards a lot of things have to go right at the line of scrimmage. Against Cincinnati, the Ravens offensive line was like a diesel engine, propelling the running game to a record performance and the team into the playoffs.