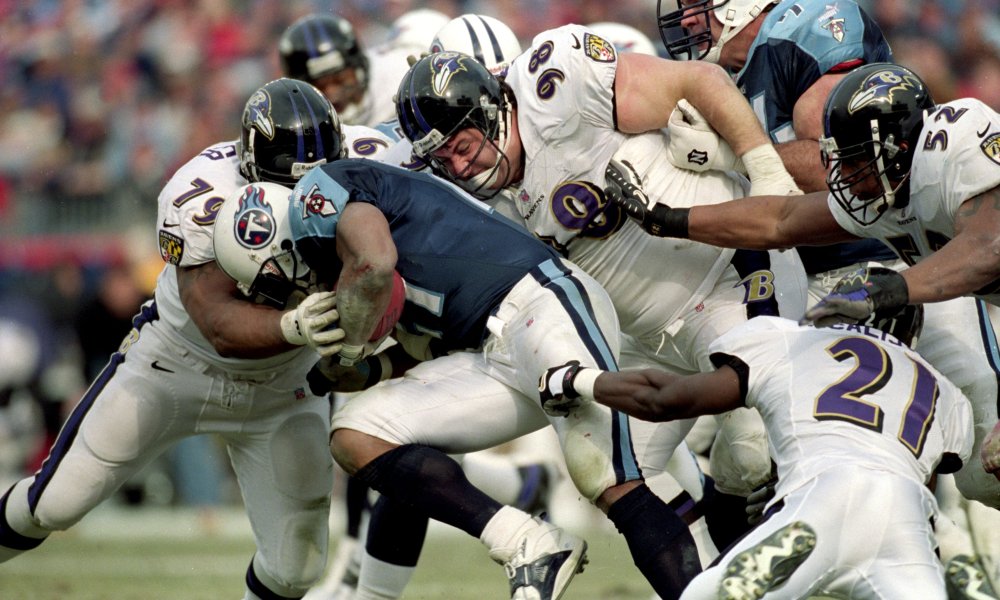 It’s often said that the most bitter rivalry in the NFL is that between the Baltimore Ravens and the Pittsburgh Steelers. But it wasn’t always that way. During the days of the old AFC Central the team that would boil the blood of Ray Lewis & Co. resided in the city of Nashville in the form of the Tennessee Titans.

The mere mention of these names would spark the competitive juices within the Ravens and their fans. You could feel the adrenalin running through your veins like a freight train.

But when the NFL decided to shuffle the deck and set up 8 divisions of four teams, the Ravens and Titans were separated and the biannual head-knockers ceased.

But lately this rivalry has been reignited. The disdain has resurfaced, fueled in many ways by sophomoric behavior of the Titans and their insufferable head coach, Mike Vrabel. For those who may have forgotten, let’s revisit…

* During last season’s Divisional Playoff Game, Titans Jeffrey Simmons, known for beating a defenseless woman (Google it if you need proof), spat on Marshal Yanda and directed unsavory insults on the field towards Marshal about him and his family.

* After the game the Titans mocked the Ravens “Big Truss” slogan. Reporters have said that the juvenile display of poor sportsmanship emanating from the Titans locker room was shocking.

* The Titans’ team gathering on the Ravens shield prior to kickoff during Week 11, was an outward display of disrespect to go along with Malcolm Butler’s obscenity-laced bravado directed towards John Harbaugh and Simmons doing his best imitation of a dog marking its territory.

* And then there was the classless Vrabel’s confrontation with Harbaugh at midfield on November 22 – the person largely responsible for his team’s juvenile antics.

Yes Ravens Flock, the rivalry is back and the Ravens best response would be a convincing DUB on Sunday and then walk away with the understanding that more “business” lies in wait. Don’t sling mud with pigs. You’ll both get dirty and the pigs like it.

This should be bulletin board material for the #Ravens who were mocked often by the #Titans during 2020. This is the “great” Tajae Sharpe who was let go by TN in the offseason and “racked up” exactly zero catches in 11 games with the #Vikings this season. pic.twitter.com/tOOgaOLPqv

We May Never Pass This Way Again

I was reminded of this Seals & Croft song last night while watching Inside The NFL on Showtime. As they do each week, the show features some players around the league who are mic’d up. One Texans’ player made it clear that his team, the way that it was comprised at that moment, would never be the same again after their 16th game of the 2020 season.

These men, many being close friends, will clear out their lockers and go their respective ways. Twenty-five percent will never play together again and for men who have committed so much of their time, their blood, sweat and tears to each other, it can be an emotional separation.

Even if the Ravens win their next four and hoist their 3rd Lombardi, the experience will be the same. Attrition will occur, and the player who immediately comes to mind for me, is Mark Ingram.

Since his arrival in 2019, Ingram has been a leader and the consummate company man. And even though this season has been personally, largely forgettable for Mark, he remains engaged and encouraging to his colleagues for the betterment of the team. It’s a statement of his great character – character that attracted the Ravens to the talented back.

Parting ways with Ingram will save the team $5M in cap space next season. From a financial perspective, the decision is a no-brainer. From a human perspective, it’s saddening and it represents the unsavory aspect of employment in the NFL.

A Blast From The Past

I noticed a thread on social media that posed a question to fan bases of playoff teams across the NFL. The question? “What player from your team’s past would you like to see on the field this postseason?”

If I could cast a vote, my knee-jerk response would be Ray Lewis, if for no other reason than to help the Ravens throttle down on Derrick Henry. But then upon further review, the thought of Jonathan Ogden lingered. Imagine JO on the field with the current collection of road graders the Ravens field, coupled with their talented ball carriers. Imagine the possibilities…

Speaking of possibilities, how about some playoff predictions for the back-to-back triple headers on Saturday and Sunday?

It would work out well for the Ravens if the Colts pulled the upset and the Ravens took care of business in Nashville. That would leave the Ravens with either a road trip to Pittsburgh or a home game against the Browns. Unfortunately, that won’t happen. The Bills are on a roll and Philip Rivers has never really done much in the postseason. I’m not expecting much on Saturday either.

The Rams have won six of the last 10 against their division rival but this time they’ll have to take on the Seahawks without Jared Goff. But will it really matter all that much? In 10 starts against Seattle, Goff has 8 TD passes and 9 INT’s. Look for this one to be a defensive battle that will be decided by a late turnover. Unfortunately for the Rams, John Wolford’s last pass of the season will be like his first career pass last week against the Cardinals – an interception that sets up his opponent’s only touchdown of the day.

The WFT’s front four against a sieve-like offensive front for the Bucs might trigger a restless night for Tom Brady. But one look at the Washington offense might remind Tawmy Boy that he won’t need to do much to advance.

I’m going to hold off on this one until we do Bold Predictions here at RSR but if you want a sneak peek at how I think things will unfold, watch the video below…

The Bears follies against the Packers at home were a preview of how this one will go down in N’awlins. If you need a break from this weekend’s action or if your significant other has a couple of chores that require your attention, this 4:40 game on Sunday will be the time to do it.

The Browns finally make the playoffs for the first time since the 2002 season when the Steelers Tommy Maddox outdueled the Browns Kelly Holcomb by the score of 36-33. This one won’t be anywhere near the track meet that took place on January 5, 2003 but it will be as close. The 2021 rematch will be a sloppy, slobber-knocker. Can the Steelers controlled passing game with a few downfield shots outduel the Browns ground and pound approach? Yes!

Remembering a Great Fan and Even Better Man

Yesterday I learned that devoted Ravens fan Marcus Wyche had passed after a long bout with cancer. Marcus has dropped me IM’s dating back to 2014 with questions about the Ravens. His passion was obvious. I never had the privilege of meeting Marcus in person or even speak to him on the phone. But I could feel the quality of his character in his words. He was honest, fair, engaging and respectful.

Even during challenging times, Marcus’ tone was that of an optimist – of a man who sought to learn from mistakes and seek the silver lining in even the most adverse of times. He did that with his cancer and shared with me on a number of occasions, “I’ve got this!”

I wasn’t the only one who Marcus regularly engaged with on social media. Judging from the outpouring of affection for Marcus on Twitter and Facebook following the post below, my impression of this gentleman was clearly shared. I have no doubt that he was an amazing husband, Dad and family man. I pray that the heavy hearts of his family and friends are lifted by their love and the wonderful memories that I’m sure they created together.

Just learned of the passing of @mwyche22. I never had the pleasure of meeting Marcus but he was optimistic & fair, a gentleman & a diehard #Ravens fan. Marcus battled cancer valiantly. As I told him, “he played like a Raven.” He will be missed. Prayers for his family & friends.😢 pic.twitter.com/FJiLp4Y9hZ

Hopefully somewhere on the other side, you’ve connected with Mo Gaba and together, you’ll cast a shade of purple over Nissan Stadium this Sunday.