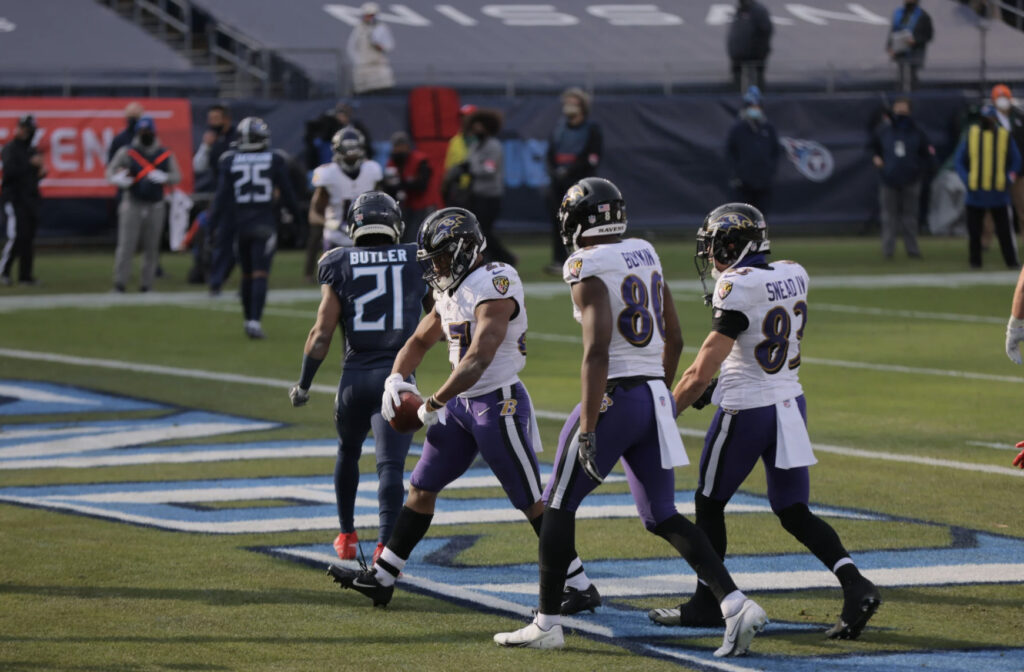 We did it folks. We did it. Okay, well, Lamar Jackson and his team did it, but at this point it basically feels we’re all on in the game.

What else you got?

The narratives are muted. The monkey is off the back and the Ravens have their first playoff win since 2014.

There’s still more games to go, but you can’t underrated how big it is to get that stain off your reputation.

After a slow start the offense finally got its bearings and made some big drives. Converting in the red zone was the #1 issue as they only scored once on three attempts. That drops the grade down a little bit, but they did enough to get the job done, especially when the Titans were trying to make a comeback.

Jackson on Jackson: B+

The first quarter was scary. That interception was probably the worst pass I’ve seen Lamar Jackson throw in three years. It started to feel all too much like last postseason. However, Jackson took the advice that I expect he was given:

And that’s exactly what Lamar did. He used his legs to make electrifying plays. He stacked that with an efficient passing attack, completing 70% of his passes for 179 yards.

Then added 16 carries for 136, including a 48-yard TD. That’s just Lamar being Lamar. Don’t ever change!

It was tough sledding for the running back duo of J.K. Dobbins and Gus Edwards. Both averaged 4.8 yards on the ground, but the big plays just didn’t come easy. The Titans did a good job of limiting their impact by using extra defenders to stuff rushing lanes. To be completely honest, this grade gets a boost from the pass catching of Patrick Ricard. They were simple easy plays, but they were game changers as Lamar just repeatedly took the easy pass to the tune of three catches for 26 yards to set up a TD to go ahead 17-10 coming out of the half.

Wide Receivers and Tight Ends: B+

As always, it wasn’t a ton of work, but outside of Mark Andrews‘ missed opportunity on 3rd down in Q1, it was a strong game for the receiving group. Marquise Brown earned his “Hollywood” nickname back by having his best game of the year (in my opinion) with seven catches for 109 yards. He also had two “rushes” that both came off swing passes, for for 19 yards. If you count those as catches it jumps up to nine catches for 128 yards. That’s the #1 performance we need next week.

Andrews didn’t have the most impactful game, but he caught a crucial 1st down that went for 17 yards and we know he’ll be back next week.

My disappointment in the offense comes from the offensive line. No doubt the Titans played the Ravens run game really well, but the pass protection was spotty (Lamar was sacked five times) and the run blocking just wasn’t as good as it has been. They’ll need more from this unit next week. 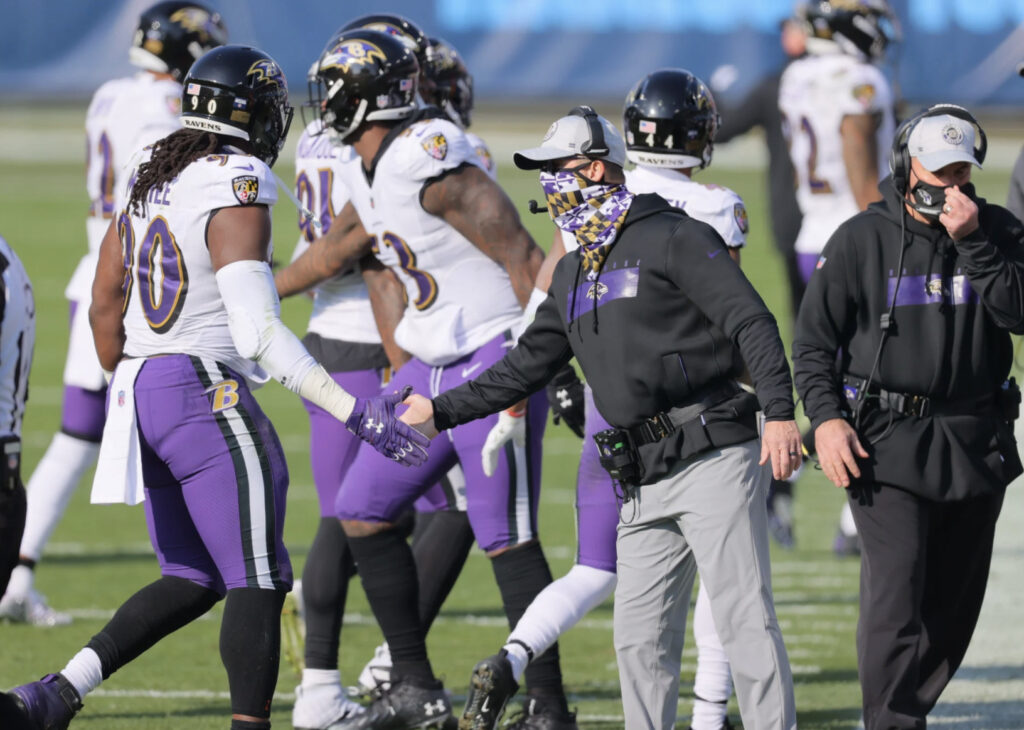 The Titans were one of the most potent units in the NFL all season long. They were held to 13 points and just 209 yards.

The Ravens defense played big ball today and smacked the Titans in the mouth. Absolutely outstanding showing, especially after getting down early.

I said last week that I would save the A+ for an A+ worthy grade. Well, consider it earned.

I think this defensive line played their best game of the year. Derrick Henry was held to 40 yards on 18 attempts for 2.2 yards per carry, which is no easy feat.

The Ravens invested in the line by adding Derek Wolfe, Calais Campbell and Justin Madubuike and it paid its dividends today in the form of a playoff victory and shutting down the main weapon of the Titans offense. A+ to me.

Pernell McPhee set the clock back today, having an absolutely dominant game against the run at the OLB position. He joined Wolfe to lead the team in tackles and his impact did not go unnoticed. Matt Judon also made some big plays today, while Yannick Ngakoue didn’t go home, but he did get enough pressure to make a difference.

Inside linebackers L.J. Fort and Patrick Queen showed good form with their tackles and, while they struggled against the pass game in the middle of the field, they did a nice job of wrapping up and keeping guys from getting first downs.

There was a lot of talk about Marlon Humphrey having a bad game, but with the exception of a few by A.J. Brown (including a TD that could have easily been called back for OPI), he held his own. Marcus Peters backed up his talk with a beautiful interception that ended the Titans’ comeback hopes.

Overall, the Titans were able to make some plays in the air, but when it mattered the secondary got stops and that turnover was crucial.

Justin Tucker missing a FG is not what any of us expected, but he made up for it quickly by drilling a 51-yarder that made it a seven-point lead in the fourth.

There were very few returns, but everything else was solid.

The coaching performance was outstanding.

The halftime adjustments were flawless, as Greg Roman found concepts that worked, such as attacking the flats with Ricard or going to quick outs and other sideline concepts with Brown that opened up yardage. The Titans were snuffing out the inside read runs with regularity, but as we saw, it only takes Lamar getting loose once to change the game – that’s why you have to stick with it.

Wink Martindale put on a clinic from start to finish by constantly putting his guys in a position to succeed.

John Harbaugh was taking heat, but he shut the critics down, got a playoff win and moves on by bringing his guys to Nashville prepared to play. You love to see it!

The sole nitpick would be the weird clock management to end the first half. Instead of using a timeout (or even a spike) after picking up a third down near midfield, the Ravens rushed to the line, wasted a ton of time, and ended up losing six on first down. The drive ended in a punt (which was negated by a Titans penalty that gave the Ravens a first down with five seconds left), instead of points to end the half, which was disappointing.

Marquise Brown, the Soulja, the Hollywood man. Step on up and get your game ball! He didn’t find paydirt, but his yardage was crucial with several first downs and key plays.

From Hollywood to Soulja but then back to Hollywood: the Marquise Brown story.

Honorable mention has to go to the entire defensive line. Wolfe, Campbell and Williams were dominant inside for the Ravens and a huge reason why Henry found no daylight all game.