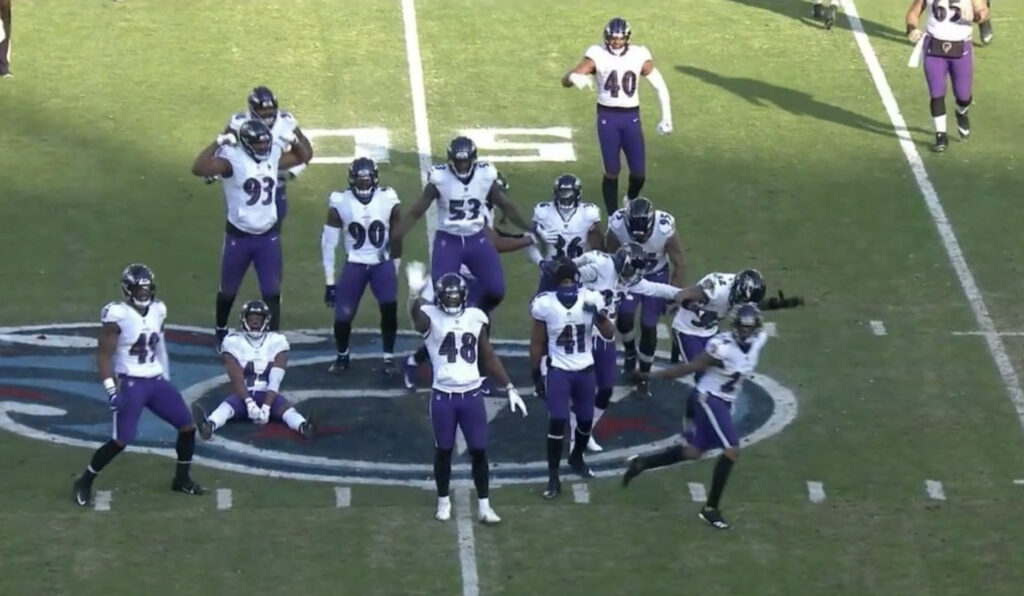 This year’s Ravens are not going to be disrespected.

Titans cornerback Malcolm Butler made a huge mistake of flipping off Lamar Jackson after managing an interception in the first quarter of their wild-card matchup.

This didn’t age well for Malcolm Butler…you never wake a sleeping giant and that’s exactly what he did to @Lj_era8 here. Get your sets of finger exercises in on the couch the rest of the season Malcolm 😂 pic.twitter.com/XhhdcWiRjV

From there, Jackson almost single-handedly took over the game for the offense in the 20-13 victory. After scoring the game-tying touchdown, Jackson fired the ball into the wall behind the end zone and dared another player to talk smack.

When Marcus Peters managed an interception that sealed the victory, he and several other Ravens defenders stomped on the Titans logo at midfield. It was payback for Tennessee gathering on the Ravens logo and confronting coach John Harbaugh prior to their Week 11 matchup.

marcus peters is a national treasurepic.twitter.com/itk5DYAMr2

Jackson didn’t even bother shaking hands with the Titans after the game.

“I feel it was just disrespect to see what went on before the game the last time we played those guys, and they were standing on our logo and seeing them get into it with our [head] coach,” Jackson said. “That was just disrespectful, because we treat all of our opponents with respect. It wasn’t no reason for us to shake hands and stuff like that.

The Ravens probably didn’t endear themselves to a national audience with those displays of bravado.

However, the coaches, players and fans in Baltimore don’t care.

The “us against the world” attitude has always been a trademark expression for the city.

The Ravens will need that swagger throughout the rest of the postseason.

“I just think it’s a very connected team,” he said. “It’s a team that really cares about one another. They have a real strong faith, and faith is the most powerful thing there is. There’s great power in faith, and belief, and trust, and these guys have that. So, if that’s part of it, then that’s part of it.

The Ravens face another difficult test in the divisional round against the Bills, who are one of the feel-good stories of the postseason. Buffalo managed its first playoff win since 1995 with a 27-24 victory over the Colts in the wild-card round.

Bills quarterback Josh Allen, who was taken 25 picks ahead of Jackson in the 2018 draft, is having an MVP-caliber season. Allen has thrown for a franchise-record 4,544 yards and 37 touchdowns, along with 10 interceptions. Overall, Buffalo tied for the league’s second-ranked offense with 396.4 yards per game.

“He kind of came up the hard road and the underestimated road,” Harbaugh said about Allen.” I always kind of like those kinds of guys, for sure. But I’ve had the chance to talk to him a few times outside of football, at least one time outside of football since he’s been with the Bills. I just think he’s a great guy. He’s just a great guy. [He’s] a great, young man. [He’s] a tough competitor, man.”

The Ravens defense will need another stellar performance to contain Buffalo. The good news is Baltimore emerged from the game with the Titans healthy.

The Ravens have also performed historically well on the road in the postseason with an 11-6 record, the NFL’s best mark.

“Our guys have played well on the road all year, and for a couple of years,” Harbaugh said. “This specific group has really done a great job of playing on the road anyway in the regular season.”

So far, they’ve kept that rolling in the playoffs passing their first test.

Buffalo will be a bigger challenge.