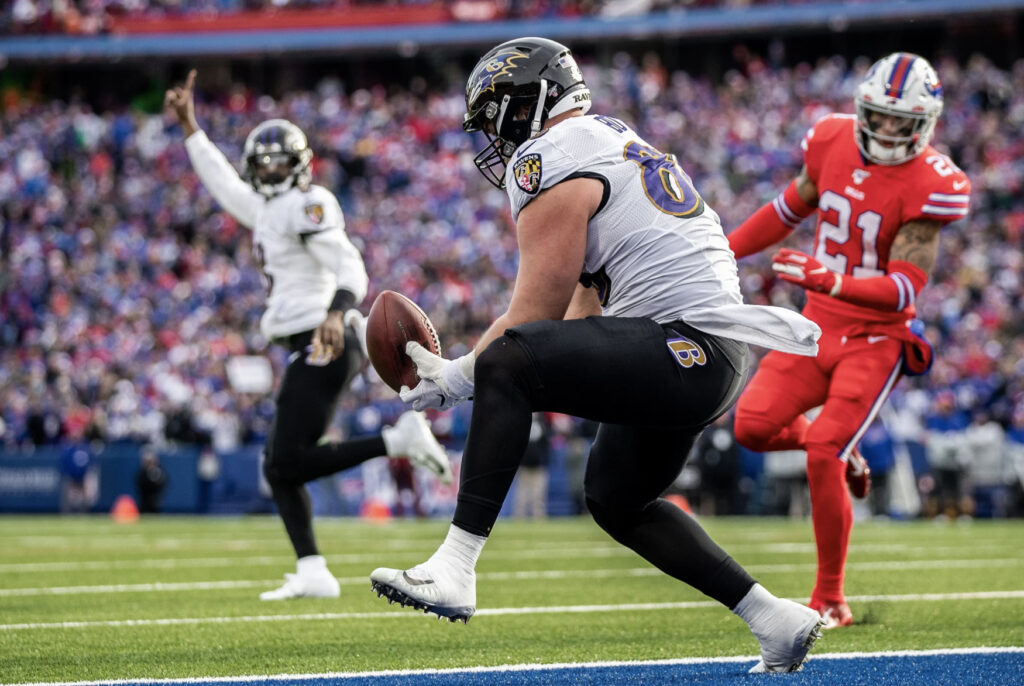 Gus up the Middle

Statistically, the Bills have one of the worst rush defenses in the NFL. During the 2020 regular season, Buffalo allowed the third most rushing yards per game in the NFL (163.0). The Bills’ defensive line, comprised of Ed Oliver (287 lbs.), Quinton Jefferson (291 lbs.), Jerry Hughes (254 lbs.) and Mario Addison (260 lbs.) may be the lightest in the NFL. The interior of the Bills defense was exposed against the Colts in the Wild Card round. Colts RBs Jonathan Taylor and Nyheim Hines combined for 153 yards on 27 carries (5.6 YPC).

Gus Edwards doesn’t get the credit that he deserves. He is, without question, one of the NFL’s absolute best rushers between the tackles. Edwards’ yards per carry average of 5.0 was tied for 9th in the NFL during the regular season. Edwards’ most effective runs are right up the heart of the defense. His size and full speed ahead attitude make him a serious headache to tackle. Greg Roman should call a good number of plays that take Edwards into the heart of the undersized Bills defensive line on Saturday.

Getting Edwards going and wearing down the Buffalo defense should be a top priority for the Ravens offense on Saturday night.

Buffalo’s rush defense is not just susceptible t Edwards running up the middle. The Bills lost regular season games to the Chiefs, the Titans and the Cardinals. Each of their losses came at the hands of a team with a QB with some rushing ability. In those three games, the Bills allowed 605 yards rushing (5.26 YPC) and six rushing TDs. The QBs – Patrick Mahomes, Ryan Tannehill, and Kyler Murray – combined for 139 yards on 25 carries (5.6 YPC) and three rushing TDs. In their two divisional games against the Patriots this season, Cam Newton had 13 carries for 78 yards (6.0 YPC) and two TDs on the ground.

The Bills are susceptible to QBs who can run the ball. The Ravens just so happen to have the best running QB in the NFL. In the Wild Card round, Lamar Jackson absolutely torched the Titans with his legs. Jackson carried the ball 16 times for 136 yards (8.5 YPC) and a TD. Whether it’s on the speed option, counter bash or QB draw, Greg Roman needs to give Jackson plenty of opportunities to take off running against the Bills. If the Ravens make a Super Bowl run, the highlights will surely be loaded with electrifying Lamar Jackson runs. It started last week in the Wild Card round against the Titans.

It needs to continue Saturday night against Buffalo.

Find Andrews on the “Deep Over”

As much as some fans might want them to, the Ravens can’t run the ball on every play. Against the Bills, targeting tight ends seems to be the best path to success through the air. Over the course of the 2020 regular season, Buffalo allowed the 5th most fantasy points per game to TEs (14.83). Against the Bills, opponents targeted the TE at the 2nd highest rate in the NFL. The Bills allowed the 2nd most yards to the position in the league. Last week, in their Wild Card game against Buffalo, Colts QB Philip Rivers found a ton of success targeting his trio of TEs. Jack Doyle, Trey Burton, and Mo Alie-Cox combined for 14 catches, 136 yards (9.71 YPC) & a TD.

Lamar Jackson should be very familiar with Buffalo’s struggles defending tight ends. In the Ravens’ 2019 game against the Bills, Hayden Hurst torched Buffalo for 73 yards on three catches (24.3 YPC), including the memorable long touchdown. When Jackson drops back to pass against the Bills on Saturday, he needs to be looking to find Mark Andrews. Andrews, Jackson’s number one receiving weapon, needs to have a big game to help the Ravens get a win. To give the offense the best chance of hitting on a big play to a TE, Greg Roman needs to dial up a few shots to Andrews running a “deep over.” The “deep over” is a deep crossing route that has become somewhat of a specialty for Andrews during his time with the Ravens. Andrews typically starts as an in line TE and runs a route behind the LBs as he makes his way 20 or more yards down the field towards the opposite sideline.

The route works well with play action roll outs and helps to get Andrews lost as he crosses through multiple defensive zones. 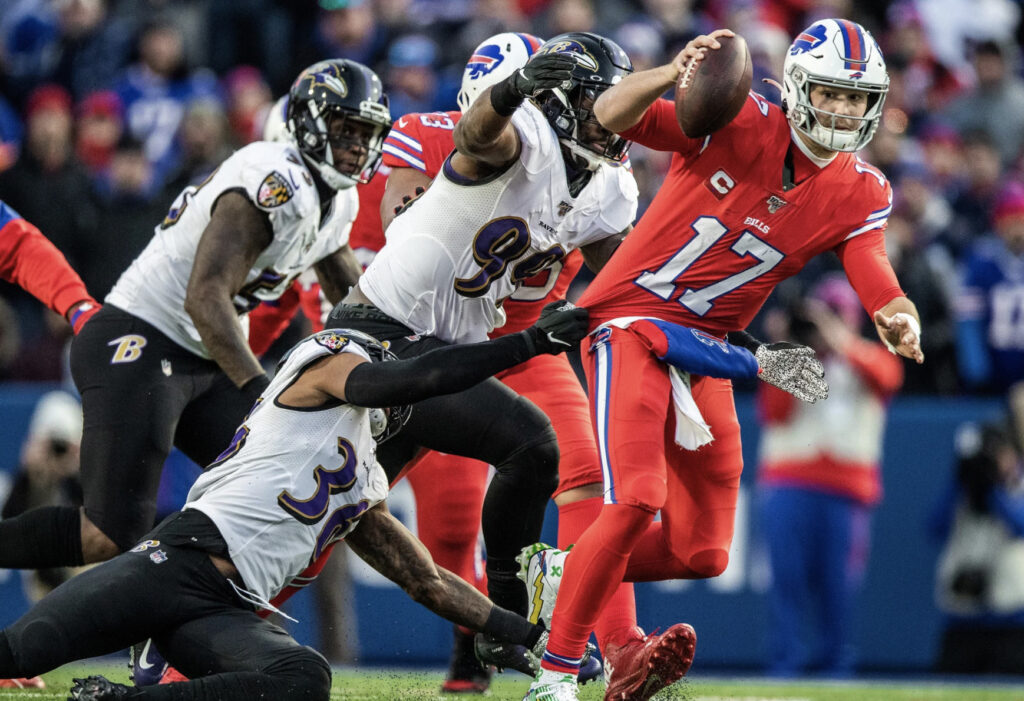 After showing some displeasure with his role as a member of the Minnesota Vikings, Stefon Diggs was shipped to Buffalo in March in exchange for multiple draft selections including the Bills’ 2020 1st round pick. With Josh Allen throwing him the ball, Diggs has quickly proved to the NFL community that he is, without question, a true number one WR. Diggs, a former Maryland Terrapin, dominated box scores in 2020, leading the NFL in targets, receptions and receiving yards. His 2020 stat line illustrates the reason that Ravens fans spent the offseason clamoring for them to bring the Maryland native to Baltimore.

In the Bills’ Wild Card game against the Indianapolis Colts, Diggs caught six passes for 128 yards and a touchdown. His receiving yards accounted for nearly 40% of Allen’s passing production. Patriots HC Bill Belichick is well known for occasionally doubling an opponent’s best WR with his 2nd best CB and another player. He felt that it was an effective strategy to double the best WR and allow his top CB to play on an island against the offense’s 2nd best WR. Wink Martindale should occasionally use Belichick’s matchup philosophy against Diggs and the Bills. Marlon Humphrey could cover Cole Beasley or Gabriel Davis while Marcus Peters and another Baltimore defender work together in coverage against Diggs.

Using multiple defensive backs to cover one WR leaves the defense shorthanded in other areas, but it is worth the risk against a talent like Diggs. If the Ravens can limit his production, they will be well on their way to an appearance in the AFC Championship game.

Bracket Beasley on Third Down

Everyone knows that Diggs is the focal point of the Bills’ potent passing attack. His place at the top of multiple receiving categories earned him a place on the NFL’s 2020 All-Pro team. What many may not know is that Bills’ slot WR Cole Beasley was named a 2nd team All-Pro alongside the likes of DeAndre Hopkins, Justin Jefferson, Calvin Ridley and DK Metcalf. Beasley, an unsung hero of the Buffalo offense, finished the 2020 regular season with 82 catches for 967 yards and four TDs on 107 targets. Beasley’s 53 1st down receptions were good enough to be tied for 16th most in the NFL.

Beasley’s role with the Bills this year in very similar to what many football fans might call the “Wes Welker role” or the “Julian Edelman” role. Beasley takes the vast majority of his snaps from the slot and serves as sort of a comfort blanket for Allen. When the Bills need a key first down, Beasley’s sure hands and technical route running make him a reliable target.

Martindale and the Ravens defense cannot take Beasley lightly. The first step in locking him up may be checking him in man coverage with Marlon Humphrey. Humphrey, the Ravens’ best option in the slot, did an excellent job against Beasley in their 2019 matchup. On third downs, though, Martindale may need to take it a step further by “bracketing” the Bills’ slot WR. “Bracket” coverage on a WR entails one defensive back who is primarily responsible for any in-breaking routes and another who is responsible for out-breaking routes.

Using bracket coverage to take away Allen’s third down safety blanket will help get the Bills’ offense off the field in key situations.

In the lead up to the 2018 NFL Draft, Allen was considered one of the top five QB prospects in the talented class. His Wyoming game tape showed a rocket-armed QB with rushing ability that some, including myself, compared to Cam Newton or Andrew Luck. Allen was ultimately the third QB off the board (7th overall selection) when the Bills made him the future of their franchise. Since entering the NFL, Allen’s skills as a passer have improved so much that he should finish in the top five in NFL MVP voting for the 2020 season. Allen’s legs, though, are an “X-factor” that force defenses to prepare for him differently than they do for most QBs.

Allen finished the 2020 regular season 4th in QB rushing attempts, 8th in QB rushing yards and 3rd in QB rushing TDs. At 6’5” and almost 240 pounds, Allen’s size and strength present a different challenge than a QB like Lamar Jackson or Kyler Murray. Allen can shrug off sacks in the pocket, escape and throw the ball 50 yards down the field with a flick of his wrist. In the open field, Allen welcomes contact and runs through would be tacklers.

The Ravens defense needs to be prepared for Allen to pull the ball down and run. Against the Colts last week, Allen was the Bills’ leading rusher. The Ravens defenders have to take a few steps to stop Allen on the ground. Baltimore’s interior defensive linemen can’t afford to get washed too far out of their rushing lanes. If they do, Allen will gash them right up the middle. The pass rushers need to make sure to not let Allen get to the edge. Allen’s big arm makes him dangerous when the play breaks down.

Keeping Allen contained will deprive the Bills of their most dangerous rushing weapon.

Beating the Buffalo Bills on Saturday night starts with slowing down Josh Allen and the Bills’ passing attack. Allen is a legitimate MVP candidate. Stefon Diggs is 1st team All-Pro. Cole Beasley is 2nd team All-Pro. Rookie WR Gabriel Davis and former Ravens’ WR John Brown are excellent third and fourth receivers. A playoff showdown against Allen and the Bills’ WRs is the reason that the Ravens’ front office has paid for quality depth at CB. Marlon Humphrey, Marcus Peters and Jimmy Smith are one of the best CB trios in the NFL. They will have their hands full on Saturday. When he finds himself on the field, Anthony Averett will hope to make sure that he is not exposed as a weak link in the Ravens’ secondary. If Allen struggles to connect with Diggs or Beasley, Averett may see a high number of targets thrown in his direction.