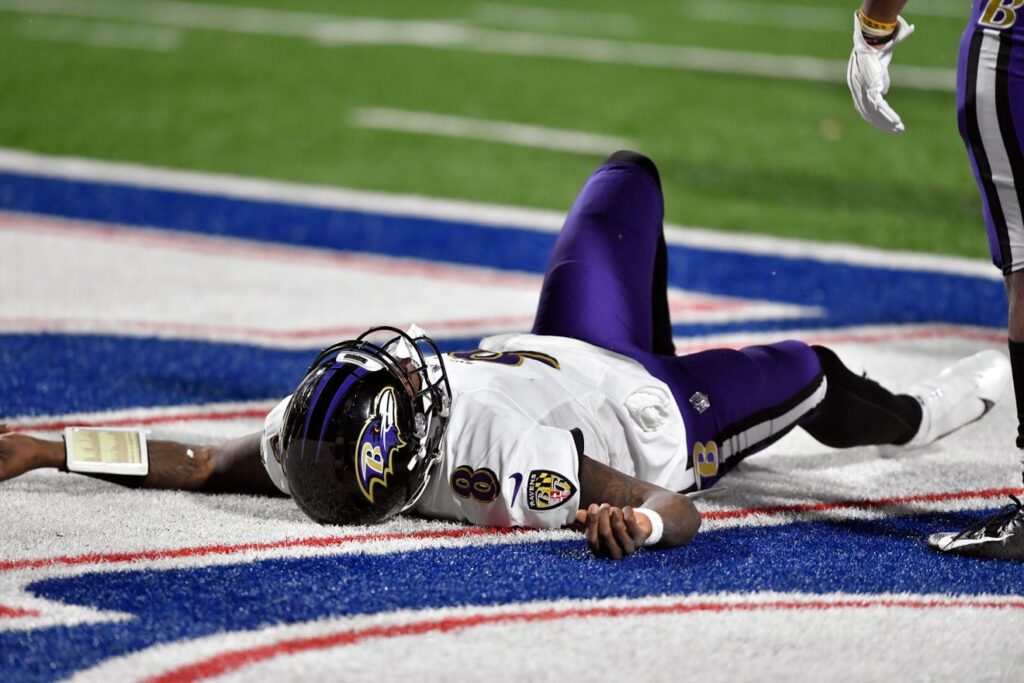 It’s an all too familiar story. The Ravens provide hope. It’s the feature item on the playoff menu. We buy in because we want to. We want to believe (or should I say beleedat?) Our mouths are watering. The anticipation is exhilarating. Then finally, when the entrée is served, and we’re expecting filet mignon we get Hamburger Helper.

At the end of the day, it’s the same old postseason song and dance. 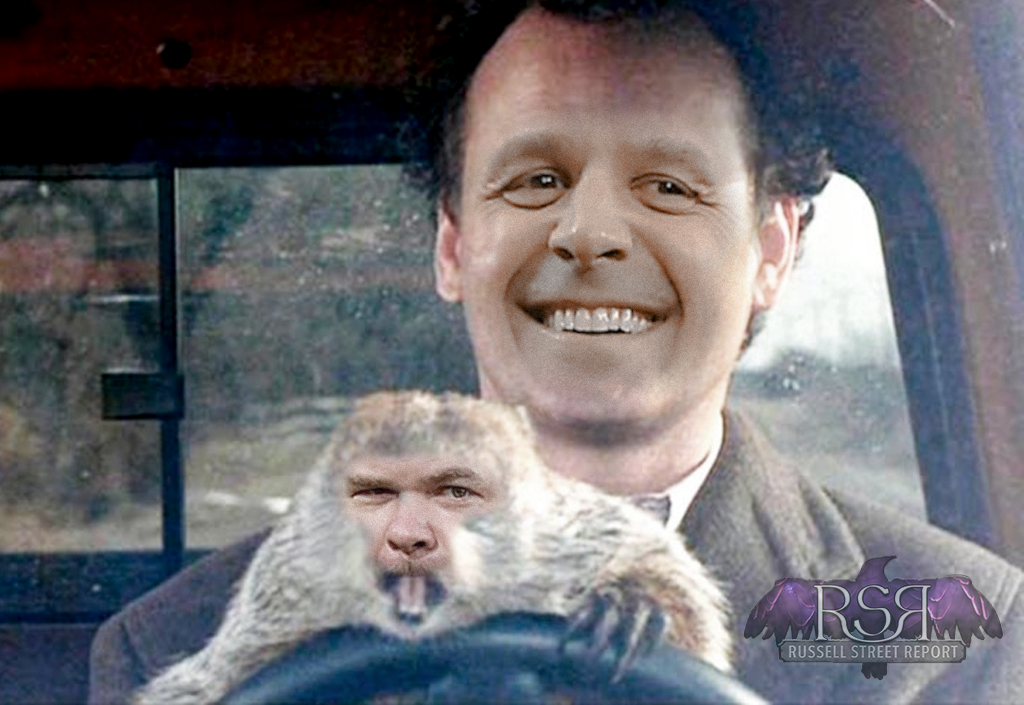 During the 2018 season, the Ravens lost a wild card game at home to the San Diego Chargers. It was pretty clear then that Lamar Jackson had to improve as a passer, that the Ravens needed help across the offensive front and that the team desperately needed more firepower at wide receiver. Fast forward to 2019 and not much changed. And unfortunately, against the Bills in 2020’s Divisional Round, the same old warts were on display again for an entire nation to see.

The Ravens are good enough to provide entertainment – during the regular season. They are kind of like a good opening act at a concert. They are good enough to inspire many to buy some jerseys, maybe even go on a few road trips and perhaps pony up some cake to get some shiny new season tickets. They just aren’t good enough to win big games. They have no answers for teams that have the talent to take away the Ravens strengths. They are the star hoops player who has big-time game until he faces a defender that forces him to his left – to go against the grain and away from what he does best.

And if he hasn’t sharpened his ability to go left, he’s doomed.

The Bills forced Lamar and the Ravens offense to their left and the results were an absolute cluster.

So, the offseason narrative is the same as it has been for years. An offseason thrust upon us abruptly and frustratingly. It isn’t just that the Ravens lost, it’s the way they lost in embarrassing fashion. They are better than this, right? Right?

Without further ado, may I present the Ugly, Uglier and The Ugliest…

The Ravens defense never folded tent. They kept grinding. They kept chopping wood. Despite an offense with a passing attack that schematically looked like an electric football game, Wink Martindale’s unit did their best to keep the Ravens in the game. They limited the league’s 2nd-ranked offense (396.4 YPG) to 220 yards and the NFL’s best third-down offense (converting 49.7% of attempts) to just 4 of 13…Marquise Brown did a nice job working back to the ball and presenting himself to Lamar. He caught four passes for 87 yards, a couple of which that were challenging, contested catches. He could have added a lot more to his totals if Tyler Huntley had connected with Brown following an outstanding out and up move that left the receiver wide open for a score – a score that apparently wasn’t meant to be…Willie Snead wasn’t flashy but he was tough, banging his way through heavy traffic like a pinball on his 5 catches on 5 targets for just 25 yards.

JK Dobbins dropped a pass from Lamar who had escaped pressure and delivered a well-placed ball that would have converted a key third-down…Gus Edwards’ fumble was punched out by Josh Norman, fortunately recovered by Matt Skura…The wasted timeouts in the first half were costly. During the Ravens drive to close out the half, if they still had one of those timeouts it could have preserved about 8 seconds of clock and given the Ravens another shot at the end zone…Patrick Queen showed me very little last night and that’s been a regular pattern throughout the season, save his performance v. Tennessee last week. We often beat up the Ravens because of their inability to develop receivers. Linebacker development has been a given for the Ravens, until Queen. For a first-round pick, Queen wasn’t even as good as UDFA Chris Board this season and a far inferior player to LJ Fort. He undoubtedly has some offseason soul searching, film study and strength conditioning to do.

The Ravens outgained the Bills 340 to 220; they had more first downs and possessed the ball 10 ½ minutes longer. But their red zone failures were the difference in the game. They were 0 for 3 and of course one of those epic fails that could have tied the game instead, increased the deficit to 14 points – a deficit the Ravens would never recover from.

The #Ravens out-gained the Bills 340 to 220; they had more first downs and possessed the ball 10 ½ minutes longer. But their red zone failures were the difference in the game. And of course this was the dagger… pic.twitter.com/gBQpB2rqvO

The Ravens offensive line was an abomination in Buffalo. It seems that whenever they are confronted with athleticism on the other side of the ball and are forced into passing situations, the unit gets destroyed. Bradley Bozeman was frustrated throughout the game. Whoever lined up at right tackle resembled a turnstile at Pimlico. And Patrick Mekari looked like a juggling clown who failed during his audition for a traveling circus. His final errant snap dashed any hope the Ravens had and it ended with a concussed Lamar who left the game and ultimately the season.

The #Ravens have done a great job masking the big losses of Ronnie Stanley and Nick Boyle…until last night when the offensive line was a major problem. pic.twitter.com/aeZ7BgjesJ

The Ravens Wolfpack is a proud trio of special teamers. Messrs. Tucker, Koch and Cox looked more like a litter of Guinea pigs. When Sam Koch hits a 23-yard punt and Justin Tucker misses two field goals in the same game, it’s an omen for impending disaster…Carl Cheffers crew let the teams play last night and they looked the other way when ticky-tacky fouls could have been called. Yet the Ravens still managed to rack up 59 yards of penalties compared to the Bills’ 11 yards…The Ravens fumbled FIVE TIMES. Fortunately, they lost none but c’mon man!…Not sure who is at fault for the defensive lapse but the last time I checked, it’s really tough to cover 3 receivers with 2 defenders. The Ravens tried it but failed and it led to the only offensive touchdown of the night.

Lamar Jackson was totally exposed by the Bills. He looked so bad that by contrast UDFA rookie Tyler Huntley appeared to be the better player. The optics weren’t good. I get that the passing conditions were hardly ideal but Lamar just waits far too long to deliver the ball. His mechanics were poor and he rarely threw on time. On the pick-6 Lamar looked in on Mark Andrews when a wide open Willie Snead stood in the end zone a few yards to the left of the big tight end….If Lamar is to develop as a passer, the Ravens will need to bring in a true passing coordinator who designs far more advanced route concepts than “Pass Coordinator” David Culley creates. If not, Lamar will need a new OC. Speaking of which…

“My 6 year old, who is asleep right now, can probably run this offense as well.”@CutToIt has some suggestions for the Ravens offense moving forward pic.twitter.com/kZ6lhPQI36

Greg Roman landed a few punches with the Ravens first drive. And let’s be clear, it isn’t on him that the offensive line was a sieve and that’s really an insult to sieves. But while Bills DC Leslie Frazier played chess, Roman played checkers. Throughout the game the Bills showed a 44 defensive look and Roman did little to spread them out or attack it with misdirection, play action on first down or by taking a shot or two downfield against the Cover 3 that goes hand-in-hand with the 44. Too often the Ravens found themselves facing second and third and long because they were unable to win on first down and many of those losses can be attributed to poor play calling.

Schematically Wink Martindale did a great job of keeping the Bills prolific offense in check and his plan deserved better results. If only his offensive counterpart was equally as effective.

Hopefully, the following quote served up by John Harbaugh after the game was intended to be lip service:

“[The Bills] didn’t do anything that surprised us. We were prepared for it. I thought they executed well. We executed well at times. We weren’t able to finish the drives and get the points that we needed — that’s the bottom line.”

What he meant to say was:

“We were outcoached, outplayed and out-schemed by the better team and the only way we will ever get over this playoff hump is if we can be more multi-faceted in the passing game. Otherwise, doing the same things over and over and expecting different results is…well you know…”

Willie Snead had an interesting (and rather revealing) thought on quarterback Lamar Jackson:

“He is an elite runner, an elite passer, but there are steps he can take, better strides that he can take, and he knows that. That’s the competitor in him to want to get better each and every offseason, to fix the little things that his game needs improvement on and continue to get better as a passer. I think if he knuckles down on that part of his game and really reaches his full potential in that area, then the sky is the limit for Lamar, man. It’s just a matter of time. So, it’s really on him. I think this game is going to be a wake-up call for him, hopefully this offseason.”

The Ravens have been knocked out of the playoffs three consecutive years in embarrassing fashion. Each time, it’s the same old result – offensive struggles that force the team to play from behind, a position from which they rarely have success. During those losses the Ravens have struggled in the red zone and produced a total of just 3 touchdowns. It’s the same thing over and over. When they get to those key moments in the season, they fail again and again.

And until this changes, the results will remain the same.

After each of those postseason failures, we’re left here wondering how it will change. We conclude that a better offensive line, a big-time receiver and a pass rusher who can regularly win one-on-one battles are all must-haves.

And once again, it’s Groundhog Day.

We all are frustrated by the loss but let’s assess how we got here. The team’s ability to overcome adversity in 2020 was remarkable. To put it in perspective, please take a look at this piece I posted just after last night’s loss.

With any luck and a good offseason, we won’t be having this feeling of déjà vu a year from now.