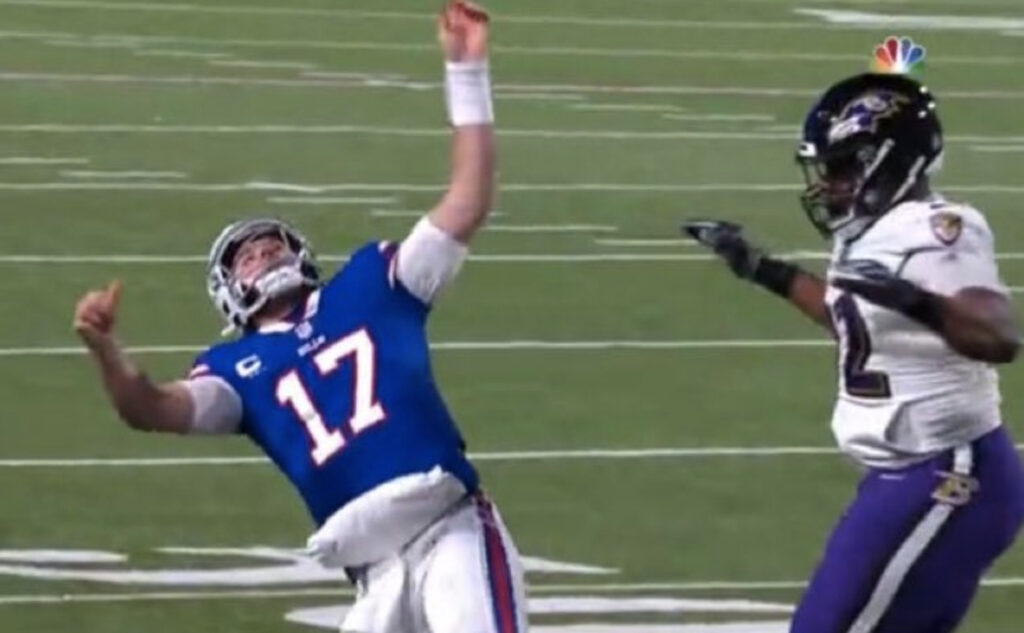 The Ravens fell to the Buffalo Bills 17-3 in the divisional round. RSR staff react to the loss here.

Things started so nicely…a wonderful opening drive, where the Ravens imposed their will by running it straight down the Bills’ throats, getting into FG range and taking seven minutes off the clock. But the wind knocked a Justin Tucker FG attempt aside, and it was a harbinger of things to come…

Tucker missed ANOTHER FG (the first time in his career he has missed twice from inside 50), but the Ravens still managed to go into the half tied at three, thanks to Tyler Bass doing the same (when’s the last time  you saw FOUR missed FGs in a single NFL game?)

Unfortunately, things would only continue to spiral…the Ravens OL couldn’t pass protect all game, and they could never again open the kind of holes in the running game they did in that opening drive. Lamar Jackson threw his first ever red zone interception, which was of course returned for a touchdown, and then suffered a concussion with over a quarter to play.

The defense allowed just 10 points, but was unable to generate a turnover (the closest being a sack-fumble near midfield that Buffalo recovered). Still, Wink’s unit deserves a ton of credit.

The Ravens were doomed by bad snaps, poor offensive play-calling (where the hell was Dez Bryant?), and atrocious blocking by an O-Line which had been so good for so long. Smarter folks than I have also said that they expect to see Jackson passing up some open WRs when the All-22 film comes out (an example of not “taking what the defense gives you.”)

Another awful flop to end a season (flopper Josh Allen would be proud). “Disappointing” doesn’t do it justice.

Seeing #Ravens fans say that Roman abandoned the run is confusing. What part of running the ball more times than they passed it in the 1st half is “abandoning” the run? Don’t look at the total carries. Focus on the run game inefficiency on early downs. A lot of minimal gains.

Tough way to lose for sure. #Ravens offense has only managed 3 TDs in three divisional games. There has to be some corrections, starting with the ability to pass protect when game script changes. I think they can build though with Brown’s development. Get some more weapons.

Three years. Three straight years of playoff exits in absolute embarrassing fashion. Yes, Tucker missed two. And yes, the defense wasn’t perfect. But this game was 100% about the Ravens offense looking beyond lost against a middle-of-the-pack defense.

The OL got bullied all day, Greg Roman made minimal adjustments to the nonstop blitzing Bills, Patrick Mekari’s snaps made Matt Skura look palatable in comparison, and Lamar Jackson had some terrible decision making in crucial moments.

Add in the LJ injury, down 14, and it was a wrap on the game and the season for Baltimore. Out-played and out-coached.

The Ravens may be “so close” but they’re closer to “so far.” The team has some serious soul searching to do, both in terms of coaching and players, if they ever want to be more than just a one & done (give or take) team.

Lamar Jackson has his own faults that we can get into separately, but one thing stands out.

One play changed the course of this game. This one:

The next play sealed the Ravens’ fate as Lamar threw the first red zone interception of his NFL career, and Buffalo took it to the house.  Tyler Huntley actually gave the Ravens a glimmer of hope. Credit to Leslie Frazier and the Bills defense who came to play tonight.

The Ravens defense also did their job only allowing 10 points.  Tucker? Had to be some serious wind.

This offseason will be interesting with the reduced cap. Can’t believe it’s over already.

➡️ The defense was, generally, excellent.