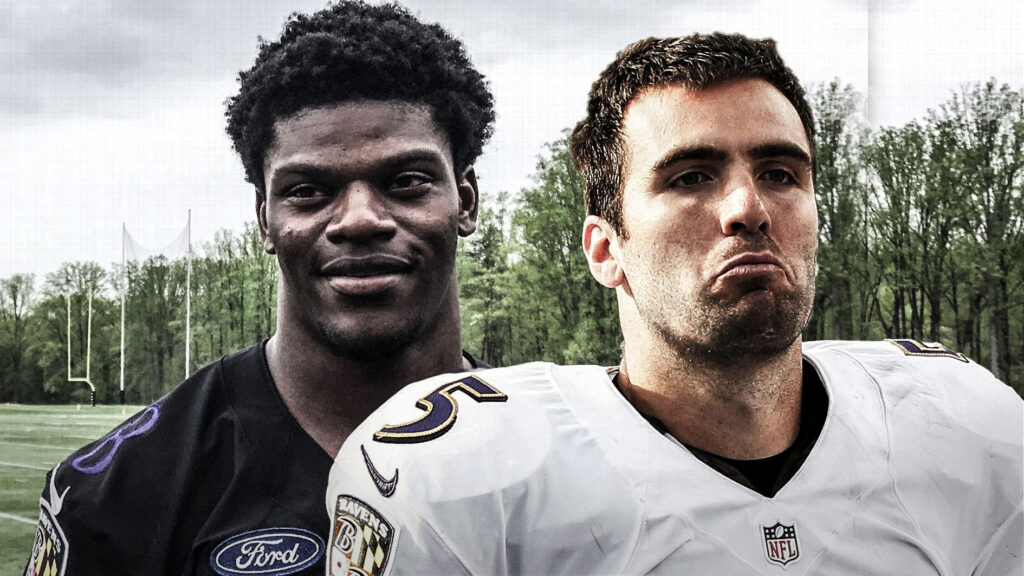 This might be the laziest narrative I’ve ever heard from Ravens fans – that Joe Flacco – good old January Joe, until Lamar Jackson proves otherwise, will always be the best Ravens quarterback because he won when it counted most, in the postseason.

There’s no denying that Flacco eventually became a clutch playoff performer. Criticized often for his lack of emotion, Joe’s calm demeanor worked to his advantage on the big stage. But it wasn’t always that way.

In Joe’s first 3 postseasons he was 98 of 184 (53.2%) for 849 yards, 4 TD’s and 7 INT’s which equates to a passer rating of 57.1. Joe rushed for 37 yards on 28 carries (1.3 YPC). After 3 postseasons Joe was 26 years old. Flacco was supported by a solid offensive line and his skill position players included: Willis McGahee, Ray Rice, Le’Ron McClain, Lorenzo Neal, Todd Heap, Derrick Mason, Mark Clayton, Anquan Boldin and other less-than-notables. 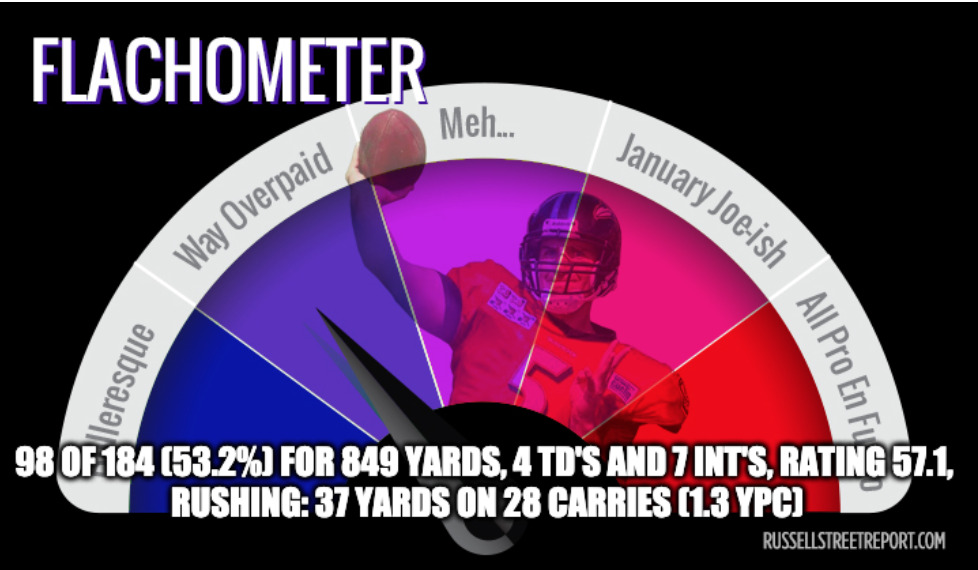 In Lamar’s first 3 postseasons he was 76 of 136 (55.9%) for 900 yards, 3 TD’s and 5 INT’s which equates to a passer rating of 68.3. Lamar rushed for 367 yards on 54 carries (6.8 YPC). After 3 postseasons Lamar is 24. Jackson is supported by an offensive line that is inferior to that which supported Joe and his skill position players have included: Alex Collins, Gus Edwards, Kenneth Dixon, Buck Allen, Mark Ingram, JK Dobbins, Willie Snead, John Brown, Michael Crabtree, Seth Roberts, Mark Andrews, Hayden Hurst, Marquise Brown, Miles Boykin and other less-than-notables. 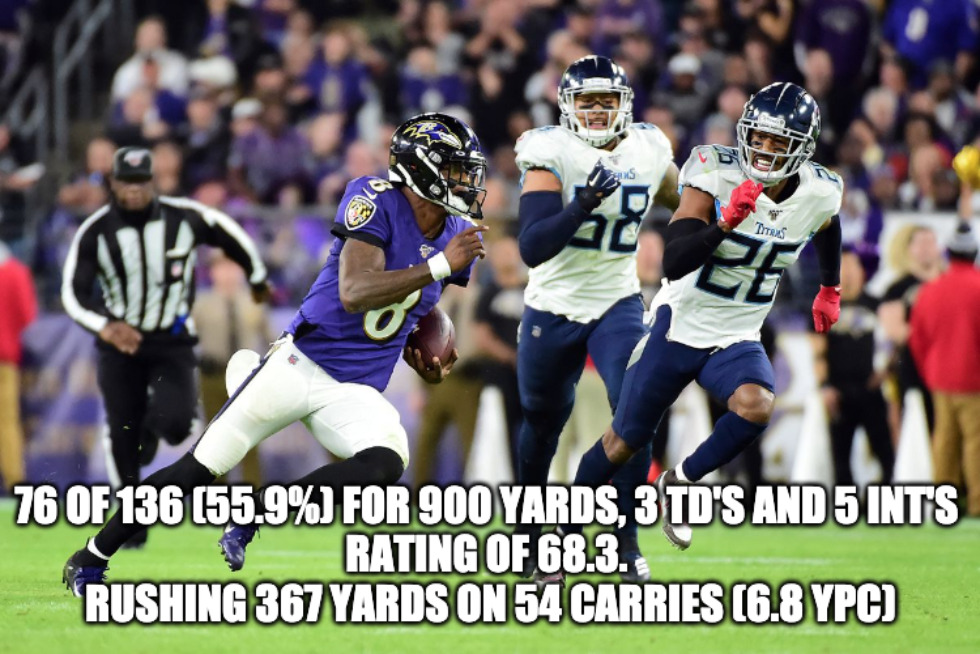 Football has often been referred to as the ultimate team game. You win and lose as a team. Team, Team, Team are among the first words uttered by John Harbaugh when he was hired in 2008. Clearly the quarterback contributes greatly to the outcome of any NFL game, but win or lose, it’s not always all on the guy behind center.

The aforementioned Joe Flacco postseason stats aren’t those of a winning quarterback. Yet during those first 3 postseasons Joe’s team was (4-3). Despite better stats and far more production, Jackson is (1-3) during his first three trips to the playoff dance.

Lamar is young and there’s growth ahead and clearly he has to be a better passer. But to jump to conclusions and label Joe the better playoff quarterback after 3 postseason appearances equates to nothing more than revisionist history.

To those Ravens fans and even media members who fan the flames of this narrative, STOP.

The 2020 NFL season has been, well you know, unprecedented. Hopefully we heal as a country in all ways and that the 2021 season will return to normalcy, with fans filling the stands. But you do have to wonder how many fans will return. Will there be such pent up demand that The Bank is full to the brim or will the return to capacity crowds be a slow process?

Prior to the pandemic, things began to change. A significant demographic that contributed greatly to capacity crowds slowly began to realize that they didn’t need to go to every game; that staying home or watching from a local pub offers some economies and creature comforts that you don’t get from the stadium. Tickets became readily available and PSL values began to decay. Many fans chose not to renew their season tickets and they willingly surrendered seat licenses that were no longer in demand. And now the licenses reclaimed by the team are for sale. Perhaps even the Ravens recognize that the hottest ticket in town isn’t so scorching anymore. 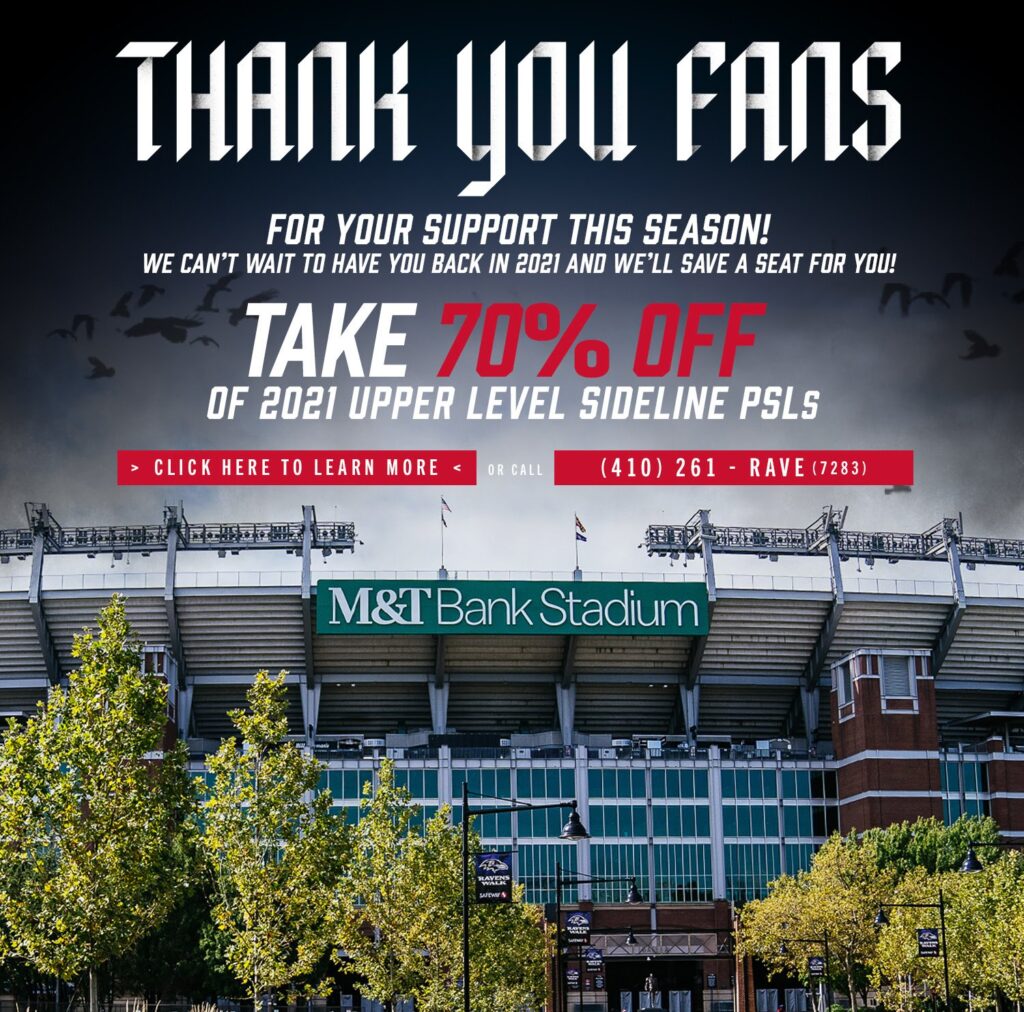 This season forced fans to stay at home. Pubs installed social distancing procedures that made visits to local establishments either less appealing or, they weren’t options at all given the closures. Many bought new TV’s that offered more than they ever have before, for reasonable prices. Fans learned new ways to enjoy the games and maybe, they discovered that at-home viewing, while not a replacement for the in-stadium experience, offered many advantages and a new perspective.

The challenge for the Ravens and really the NFL as a whole, is to make that in-stadium experience so unique that fans feel compelled to go. This isn’t a new threat to capacity crowds, but it may very well be a bigger one thanks to the pandemic.

For years Steve Bisciotti would join us on the Ravens Rap in Ocean City, MD. Always candid, I once asked Steve, given the advancement in television at in at-home viewing, if he thought there might come a day when NFL stadiums would be smaller in order to create creature comforts and enhance a fan’s experience in ways that 70,000+ capacity stadiums could not. He chuckled and reminded me of the league’s popularity. I wonder what he’d say today?

Judging from the team’s current fire sale on PSL’s, I bet he would respond differently.