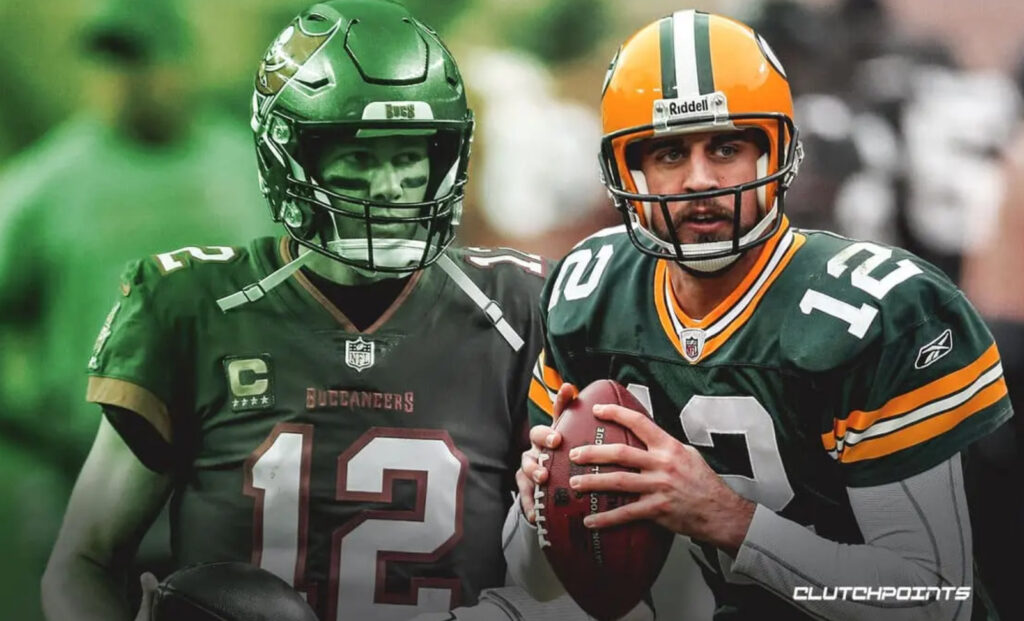 We’re all bummed that the Ravens aren’t playing on Sunday, but the NFL goes on, as do our bold predictions. Who will meet up in the Super Bowl in Tampa?

The early game features another classic matchup of legendary quarterbacks and hopefully this time, unlike the Brees v. Brady matchup which didn’t go very well for the Saints’ great, the Rodgers v. Brady duel will live up to the hype. I have to admit that after the way last season ended for Brady, I didn’t think he had anything left in the tank. Early on this season, it looked like more of the same but as of late, he’s tapped into the fountain of youth. The zip in his passing has been restored. And it makes me wonder…

That said, when the host team plays on the frozen tundra, you have to think a little home cooking will do wonders. I get that Brady is used to the cold but a season in Florida will thin the blood and the bet here is that it WILL affect his throwing. Rodgers, not so much. I also like the way the Packers are running the football and the Rodgers to Adams connection is on fire. The Packers avenge the early season 38-10 rout on the heels of a better offensive line performance. The Bucs have lost 15 of their last 16 in Green Bay. Make it 16 of 17!

Who are we kidding here? Of course Patrick Mahomes will play. But the Chiefs haven’t been the Big Red Machine as of late and there are some chinks in the armor. The Bills ran into a tough Ravens defense last week but Kansas City’s is clearly more generous. If the big stage doesn’t scare off Josh Allen, a vulnerable secondary will be inviting to the big signal caller and his impressive array of weapons. Clyde Edward-Helaire isn’t 100% and may be limited — and that limits the Chiefs.

The better defense in this game will win and my money is on the upset. The Bills not only cover the 5-point line, they advance to their 5th Super Bowl.

I think most of the #RavensFlock is rooting for Buffalo even after being sent home at their hands. I get it; I am too! I just don’t think it’ll happen. The return of Patrick Mahomes pales in comparison to The Lamar Poop as far as drama goes, but as far as stakes go, Mahomes again gets one over on LJ.

Butker at the buzzer.

In Lambeau, it’s the Aaron Rodgers “Fine, Don’t Draft Me Any Help, I Don’t Need Any Friggin’ Help!” tour that runs into the Tom Brady “Told Ya It Wasn’t Bill” tour. Juicy!

For some reason (ahem, AARON!) we never got a Brady-Rodgers Super Bowl, though it seemed inevitable. We’ll have to settle for a Brady-Rodgers NFC Championship Game, and I’m here for it.

I admit to being a Brady Hater. I really did think it was 80% Bill/20% Tom for all those years. I was wrong, and I’ll be disappointed twice on Sunday. Rodgers has the elements, but defense travels & the Bucs have a fierce one.

It’s obviously disappointing that the Ravens aren’t headed to Arrowhead, but honestly, I’m rooting for the Bills this weekend. I think Josh Allen will be able to score with Mahomes and the Chiefs, but Buffalo seems to have that ‘it’ factor this year.

In Green Bay, we have a potentially epic matchup with two of the greatest QBs of all time. Despite Aaron Rodgers‘ terrific season, it’s very difficult to bet against Tom Brady. That said, the Packers may be hungry after being embarrassed midway through the year. This one effectively defines a toss-up game in my opinion, but I’ll go with Green Bay because it’s been a while since Rodgers got them to the Super Bowl, and they’re at home.

Whatever you think Tom Brady went to Tampa to prove, he’s done it. The Bucs gave the GOAT everything he asked for and it has gotten them their first playoff run in over a decade. Thank god they changed the uniforms back to their Super Bowl unis.

Tampa isn’t an easy out, but I think the Packers defense has gotten hot at the right time and their run D, which has been a massive question mark in the past, has been much improved. For those who remember, Raheem Mostert dropped 220 on this defense a year ago in the NFC Championship with 4 TDs. I don’t think “playoff Lenny” and Ronald Jones will dominate the way Mostert did last year.

He’s playing some of the best football of his career and Davante Adams is the best receiver in football. Pair that with Aaron Jones and we’ve got quite an offense.

If we could get a definitive answer on Patrick Mahomes, that would be great.

The Chiefs defense held in big moments against *checks notes* Cleveland, and managed to hold them off with Chad Henne coming in relief.

While Hennething is possible, the Chiefs aren’t beating Buffalo without Mahomes. I question if KC can keep up with Buffalo‘a receiver corps for 60 minutes and Buffalo’s O-Line has been very solid is pass protection in January thus far.

If Mahomes does play, we’re in for a shootout.

For most of the season I have been expecting to see a Packers vs Chiefs Super Bowl. I was hoping the Ravens could’ve spoiled those plans but down the stretch I’m rooting for the Bills to win it all.

The Packers have been sailing through most of the season and still look like a team about to be in the Super Bowl and possiblly win it. Aaron Rodgers was not very happy that the Packers drafted a first round quarterback but look what that did. Rodgers has looked as good as he has in years since he has someone breathing down his neck staring at his job. Competition was obviously the best thing that could’ve happened to him.

For years we have been programmed to hate Tom Brady and the Patriots but for some reason I now find myself rooting for Brady….to a point. Maybe since he’s not with Bill Belichick anymore it makes it easier.

I’d like to see the Bucs pull this one off but I don’t think it happens.

I mentioned last week in my Bills predictions that if the Ravens lost I’d be rooting for them to go all the way. I went to the game last year in Orchard Park against the Ravens and the fans were really classy and they earned my respect. Now after they’ve won with all the donations to Lamar’s charity as well as Bozeman’s they’ve earned even more respect from all Ravens fans. Last week the Ravens did a good job on defense and have an exceptional secondary to slow them down. The wind also played a major part in the passing game. When factoring in the wind I think going to Arrowhead may be a good thing for the Bills. The Bills have looked like the hotter team as of late compared to the Chiefs.

“Will Patrick Mahomes play” is the major question but I have a feeling no matter what he will magically be cleared of this concussion. But will he really be ready? When Mahomes got up he was wobbly and wasn’t ready to stand back up. I think that will be in his head this week and it should be, it’s his health.

The Bills will pull off the upset and remind people how hard it is to win two Super Bowls back to back for anyone not named Tom Brady in the salary cap era. Mahomes will most certainly collect a few more just not this year.