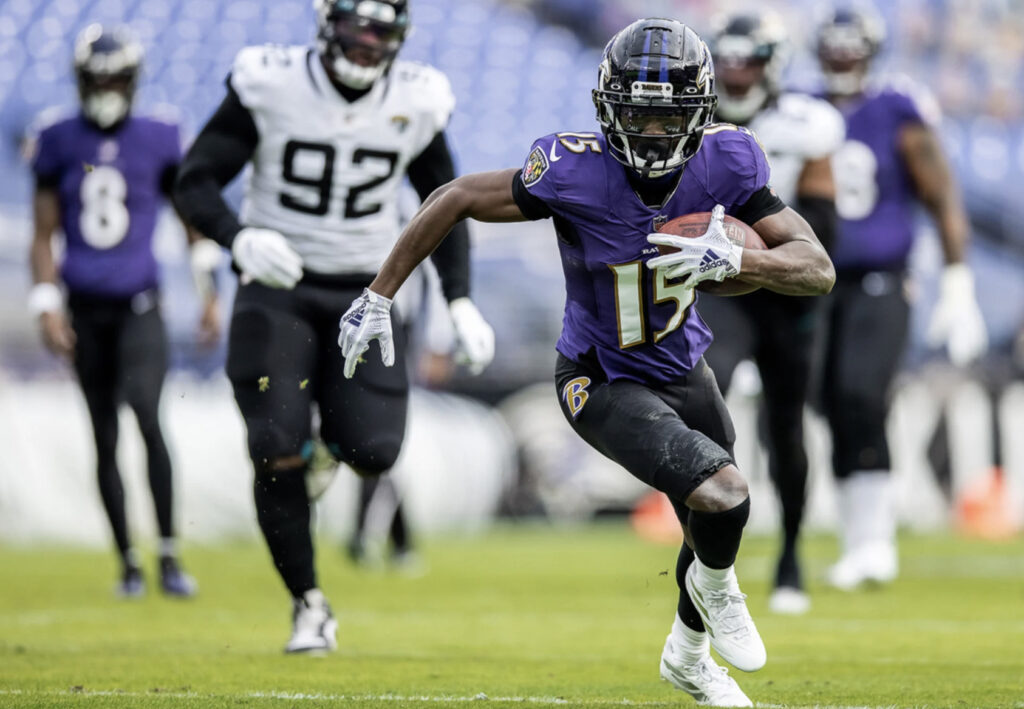 If you had told anyone halfway through this season that Marquise Brown would finish the year as someone the Ravens can be excited about and build around going into next year, they would have called you crazy. Sure enough, he turned what you could have called a sophomore slump into a sophomore surprise.

For all the criticism the Ravens’ passing game has gotten recently, and deservedly so in some instances, Brown showed that he is not part of the problem and should be a part of the solution.

I think what will be key for Brown’s success next season and beyond will be working on new ways to get him the ball. We started to see it the last few weeks of this season. There were games where Brown was attacking every level of the defense in every area of the field.

It seemed as if Greg Roman forgot, and then remembered, he had a former first round pick that ran a 4.32 40-yard dash at his disposal.

No Raven raised his value this season more than Orlando Brown Jr. did. In the third year of his four-year rookie contract, the Pro-Bowl right tackle was forced to make the switch to left tackle after Ronnie Stanley suffered a season-ending injury in Week 8. All he did was become a Pro-Bowler there, too.

Unfortunately for Baltimore, that likely means he priced himself out of town. Paying a Pro-Bowl level left tackle and a right tackle was already going to be hard enough, but now Brown would command close to Stanley money on the open market. With all the young studs at other positions up for a new contract in the short future, Brown may be the odd man out.

What wouldn’t shock me, although I haven’t heard any rumors to confirm my suspicions, is if Baltimore traded Brown. I look at a deal similar to what Miami got from Houston for star left tackle Laremy Tunsil in 2019: two first-round picks and a second-round pick. Tunsil’s rookie contract was nearing an end, and Houston signed him to a 3-year, $66 million deal last May. The $22 million per year is the second highest among all left tackles and was the highest at the time of the signing.

Obviously the Ravens are in win-now mode, unlike the Dolphins were when they made that move. Regardless, if an offer similar to Tunsil’s is out there, it would be hard to pass up for a player they more than likely don’t plan on keeping.

The right guard position was arguably the biggest hole on the roster after the conclusion of the 2019 season and the retirement of Marshal Yanda. Rookie Tyre Phillips, who I’ll get to later, began the year in that spot but was quickly replaced. Ben Powers settled in at right guard for the first time in Week 11 against the Titans and the offensive line took off from there.

His poor performance in the Ravens’ playoff loss won’t make his future outlook any rosier, but I think the right guard position is firmly Powers’ heading into next year.

Remember when we were upset when the Michael Brockers signing fell through? In response, the Ravens brought in Derek Wolfe to beef up the defensive front, and what a consolation prize he became.

Calais Campbell and Brandon Williams both missed their fair share of games this season, but Wolfe did more than just hold it together in their absence. Some of his best games this year came when Campbell and Williams weren’t on the field, most notably against Tennessee, when Wolfe led the young defensive line against Derrick Henry and kept him in check for the majority of that game.

There’s been talk of a Wolfe extension for a number of weeks now. Bringing back the defensive line from last season combined with the continued development of Justin Madubuike will be key for a defense that may lose some contributors elsewhere.

Derek Wolfe is happy to get Ravens fans’ hopes up about a return. (via IG) pic.twitter.com/gdr9A5rxuO

We all love Mark Ingram for what he did as a teammate these last two seasons, but on the field he’s the obvious choice for the biggest decline this season, going from Week 1 starter to benched to inactive for both the Ravens’ playoff games.

Unfortunately, this is just another example of a running back hitting the wrong side of 30 followed by a steep drop off in production. After a few weeks, we could all tell Ingram just didn’t have it anymore.

Hopefully a team out there tries to recapture the 2019 version of him and gives him a shot. If not, maybe a career in broadcasting or coaching is in his future. Could you imagine his energy in a booth?

Early struggles and an injured reserve stint contributed to Tyre Phillips losing his spot at right guard. He then moved over to right tackle and split time with D.J. Fluker where he wasn’t any better. Pass protection was his biggest weakness all year. He had games where he gave up multiple sacks and pressures, some that ended drives and some that kept what looked like a promising play from developing.

I’m not really sure where Phillips fits in moving forward. The most glaring hole on the offensive line, center, doesn’t look like a natural fit for him, he showed this year that he can’t be counted on for quality tackle depth at this point in his career, and both the guard positions should be solidified.

The bright spot to Ferguson’s game so far has been his play against the run and his edge setting, but even that comes and goes week to week, and his pass rush skills are nowhere to be found. He certainly isn’t living up to the “Sack Daddy” nickname from college. When Jihad Ward played well down the stretch, Ferguson began finding himself inactive on Sundays.

Ferguson is a part of a bigger question that surrounds the Ravens defense: the future of the outside linebacker position. Of the six on the roster, he’s the only one under contract for next season. We expect Pernell McPhee to be back, along with at least one of Matt Judon, Yannick Ngakoue and Tyus Bowser, with Ward as a question mark as well.

With so much uncertainty at the position moving forward, Ferguson needs to make a leap forward next season.

In fairness to Matt Skura, he probably wasn’t fully ready and healthy for Week 1 after tearing multiple ligaments in his knee halfway through 2019. He followed up what was shaping up to be a breakout season with a disappointing one. He had a few good games as a blocker, but not good enough to outweigh the bad that his mishaps brought on. Patrick Mekari, who filled in for Skura last season as well, seemed like the perfect fit to replace him. After seeing what he put on film this season, I think it’s fair to say he’d be better suited as depth with a lot of versatility rather than relying on him to be a full-time starter. Similarly to outside linebacker, center is another big question mark heading into the offseason.

It feels like Skura, a free agent, won’t be back, while Mekari doesn’t seem like the long-term answer. Trystan Colon-Castillo is still too much of an unknown for me to say he should have the job, although it does look like there may be something there. Center is easily the biggest hole on the roster. Expect it to be addressed early in April’s draft.