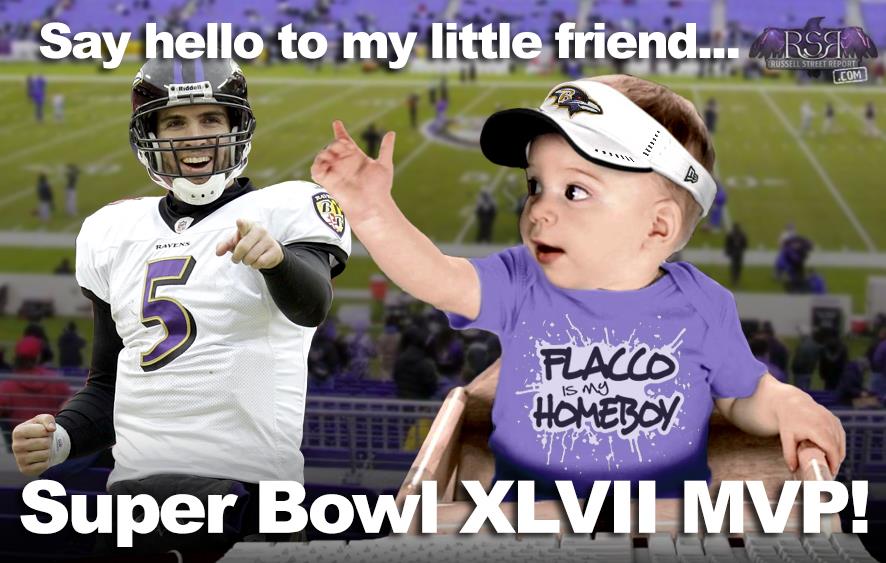 It was eight years ago today when the Ravens won their second Super Bowl with a 34-31 victory over the San Francisco 49ers. The Ravens entered the game as 4 ½ point underdogs yet they dominated the contest between the Brothers Harbaugh for 2 ½ quarters. The 49ers outgained the Ravens 468 yards to 367 and ran the ball for 182 yards (6.3 YPC). The Niners gashed the Ravens defense in the second half with 129 rushing yards on 14 carries (9.2 YPC).

In the end the Ravens prevailed, thanks in part to winning the turnover battle (2:1), winning third down and a late goal line stand to help preserve the victory. The Niners were just 2 of 9 (22%) on third-down while the Ravens were 9 of 16 (56%). It was a game that felt like survival for the Ravens following the third quarter blackout that stopped play for 34 minutes.

Joe Flacco was the obvious choice for the game’s MVP, completing a record-setting playoff run when he threw for 1,140 yards, 11 TD’s and 0 interceptions resulting in a passer rating of 117.2. That string of games will always be remembered when considering Ravens history and of course the team’s postseason success. For many, that playoff romp cemented Joe’s lofty perch as an all-time Ravens’ great.

I’ve certainly dealt my fair share of criticisms towards Joe but at the end of the day, success in the NFL is measured by championships. The Ravens in their relatively short history have two and the second never, ever happens without the significant contributions of Joseph Vincent Flacco. And for that reason alone, he’s among the Top 10. But give Weinman and LaCanfora some credit for some successful trolling.

LaCanfora is known for such click-baiting posts on Twitter (assuming you can sift through a mountain of political re-Tweets) where his street cred has been shot for years. And when I saw the following Tweets, I thought he was up to his old tricks again – pretending to be an insider when no one really takes that pretend part of his existence seriously when compared to guys like Adam Schefter and Ian Rapoport.

Based on Orlando Brown’s Tweet, the Ravens top $ deal with LT Ronnie Stanley and what I am hearing from sources, Brown is stuck in, is only interested in playing LT and his days in BAL likely numbered. Trade may be only solution

These Tweets were triggered by this cryptic Tweet from Orlando Brown, Jr.:

OBJ is well-liked in the locker room. Respected by his peers and coaching staff, Brown has spoken of the Ravens’ organization in glowing terms. So, it’s surprising to see the two-time Pro Bowler take to social media to express frustration. And, it makes you wonder what triggered the out-of-character Tweet.

Initially I thought that the message may have been born out of frustration with contract extension talks – that maybe the Ravens low-balled Brown, pricing him out at a team-friendly number considering the near $100M investment in left tackle Ronnie Stanley. But kicking the tires on the situation, a source has shared that the sudden disenchantment has nothing to do with money. Brown realizes he has no real leverage until he becomes an unrestricted free agent and despite the Tweet that in retrospect seems like a gauntlet thrown down, the behemoth tackle prefers to keep his beef with the team private.

That, we can all respect. And out of respect to LaCanfora, he seems to be onto something here, although suggesting that Brown’s return is as likely as a Chad Henne Super Bowl MVP is as far-fetched as labeling Jason a legit NFL insider.

So where does that leave Brown?

First, you have to consider where the Ravens are at Brown’s position. If Brown goes, that leaves a position of limited depth even thinner. So, to part ways with Brown it would take something substantial, as in a 2021 No. 1 draft pick. It’s possible that the Ravens would accept a pair of Day 2 picks because we all know how GM Eric DeCosta loves draft capital.

But the way I see it, unless a No. 1 is offered, the Ravens will take advantage of Brown’s walk season so as not to weaken an offensive line that is already viewed as a problem and then look forward to the likely 3rd-round comp pick that will be extended to them in 2023, a season after Brown signs elsewhere.

Turn Down For Watt

JJ Watt is in the final year of his contract with the Texans that calls for a base salary of $17,500,000 in 2021. Given all of the upheaval in Houston surrounding the status of Deshaun Watson and the Texans ownership, it would seem that the last thing the franchise wants to do is part ways with an iconic player.

It’s possible that Watt wants out and if so, one might think that he would seek a team that has a chance to compete for a Super Bowl and a team where he would feel comfortable. Both of those boxes can be checked off by the Ravens, a team with a need for Watt’s talents and one that now employs his friend and mentor, defensive line coach Anthony Weaver.

In a trade situation the Ravens would assume Watt’s $17.5M number and that wouldn’t work given the team’s current cap situation as outlined by RSR’s Brian McFarland. A trade would have to be accompanied by an extension which in turn would likely trigger future dead money. But if Watt is released by the Texans, he’ll go to the highest bidder and that bid is unlikely to land anything near a $17.5M/year deal. That appears to be the only way the 3-time Defensive Player of the Year lands in Charm City.

At 32, Watt isn’t the player he once was. Over the past 5 seasons JJ has played a full 16-game season just twice. During the other three seasons he’s played a TOTAL of just 16 games. Over the course of his last 24 games, he’s registered 9 sacks. Not bad, but clearly if Watt becomes available and the Ravens have interest, they’ll need to be sure to pay for the player Watt is and not the one he used to be. 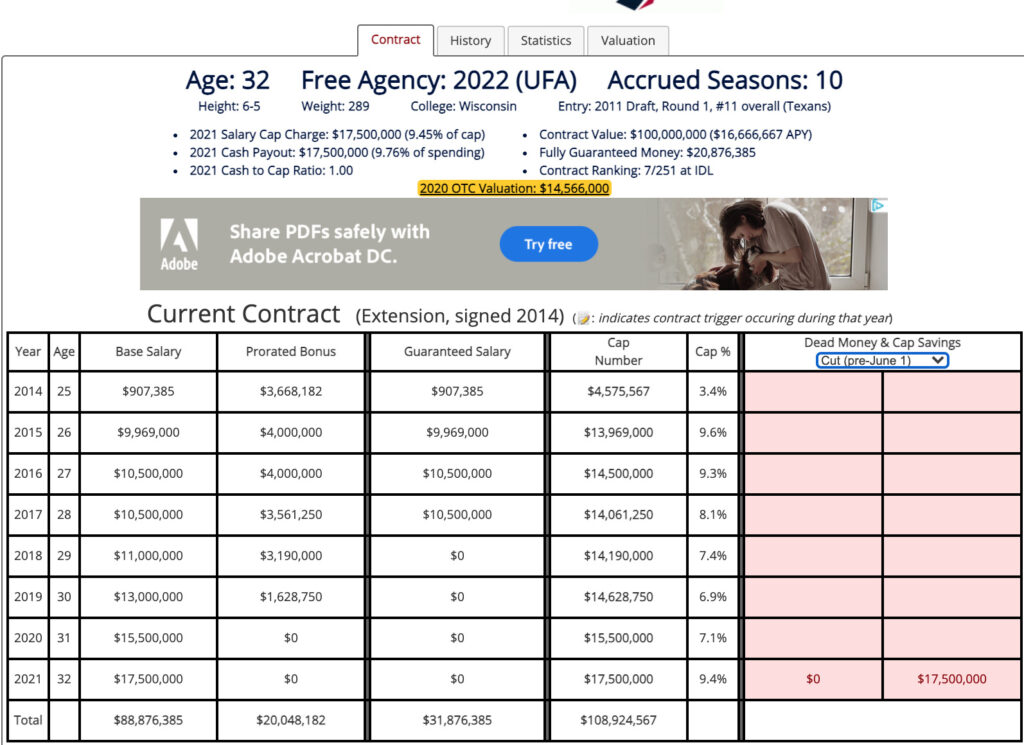 For many years the Ravens have hosted a Pre-Draft Luncheon, aka The Liar’s Luncheon. The media is invited to ask Eric DeCosta, Ozzie Newsome, Joe Hortiz and John Harbaugh questions pertaining to the upcoming draft. Typically, much is discussed but nothing is said. Why would the Ravens tip their hand regarding the draft weekend strategy?

At this time, it is uncertain whether or not the Ravens will host a virtual luncheon or if they’ll just bag the idea in 2021 due to the pandemic. But just in case, DeCosta put on a show anyway.

Fans in The Stands

Last week I posted this video sharing my thoughts on the challenges that lie ahead for NFL teams that hope to bring fans back into their respective stadiums during the 2021 season.

I then sought out responses from fans on identical polls on Twitter and Facebook. I’ll do the same here on RSR. Where do you stand? 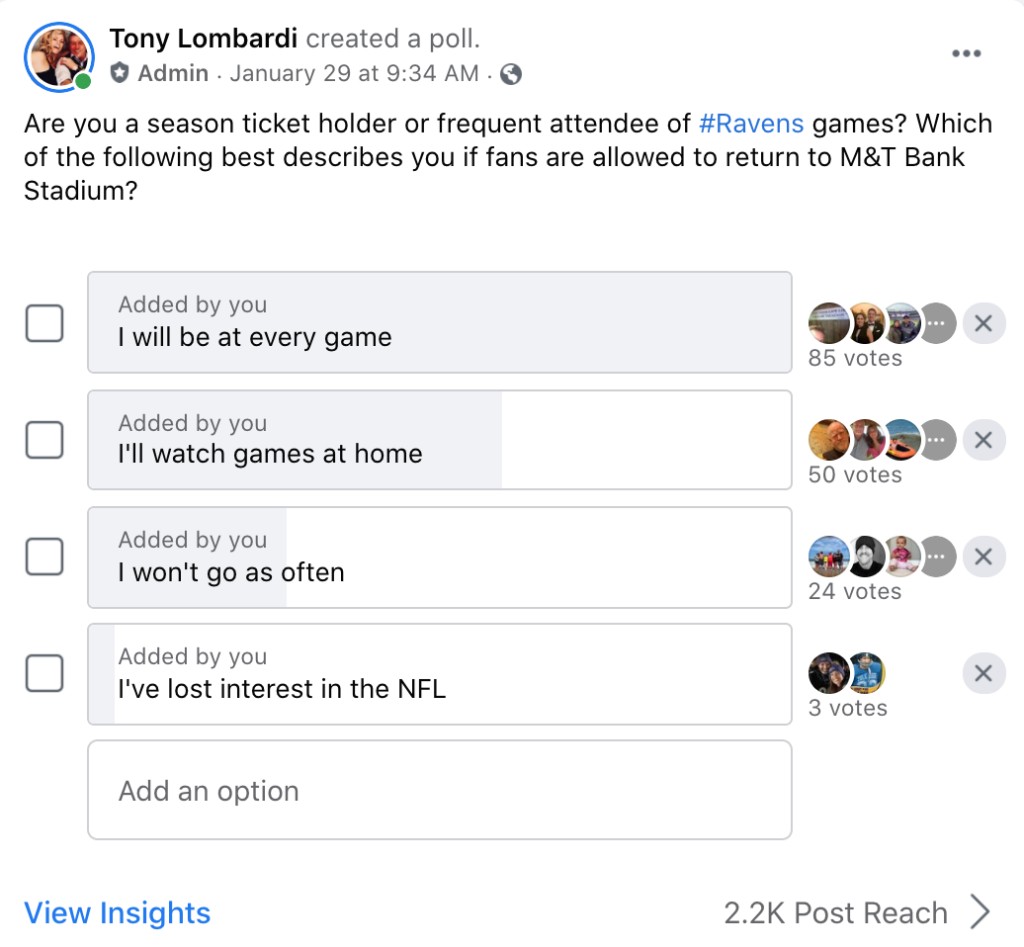 Are you a season ticket holder or frequent attendee of Ravens games? Which of the following best describes you if fans are allowed to return to M&T Bank Stadium?

If you put stock in these polls, with 40% or more of regular game attendees at least somewhat indifferent towards attending future games, the Ravens and the NFL have some work to do to keep their stadiums at or near capacity in 2021.