As another season concludes I want to first thank everyone for continuing to read this article each week. Hopefully as I’ve grown you’ve been able to do the same with me. I don’t take the support, engagement and well wishes for granted. It’s all very much appreciated.

Last slate was a good one for us. Before the games started, I made the following pivot… 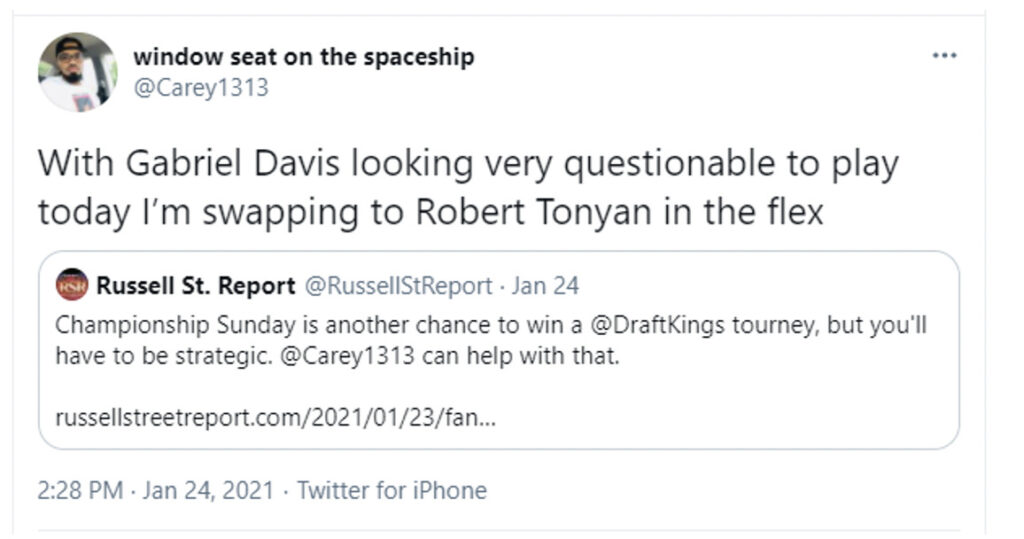 That swap – and a lot else – went right for us. Aggressively stacking Aaron Rodgers with three pass catchers worked out about as good as you could have asked with Davante Adams, Marquez Valdez-Scantling and Robert Tonyan all catching TD passes. The RB combo of Darrel Williams and Leonard Fournette put up modest yardage totals but they both scored TDs as well, combining for 31.50 points. Travis Kelce went bonkers with a 13-118-2 line (39.80 points) and Stefon Diggs didn’t pop but had a solid 6-77-0 (13.70 points).

The one let down was the Bills defense. I didn’t anticipate Patrick Mahomes moving as well as he did and between that and the Chiefs offense not really clicking to the lofty levels to which we’re accustomed, I thought I’d take a shot on Buffalo to rack up a few sacks and maybe force a turnover in a spot where nobody would play them. Well KC hung 38 on them and they could only muster 1 sack (-1 points). Looking back at the pricing the only other defense I could have went to was Tampa Bay. They ended up with 9 points but with Rodgers and three Packer pass catchers, that wouldn’t have much sense with our construction unless it was just to try to secure an ultra-unique lineup…but using the Bills Def versus Mahomes was probably already unique enough.

As a whole the lineup ended with 170.24 points…a good score that probably brought you some level of coin but not for that Milly status. We’ve got one more opportunity to make that happen…lets make the most of it! On to the Super Bowl.

For my money Evans is the most viable captain that is off the beaten path a bit but still more than reasonable. Saddled by bad matchups the last 2 weeks facing off with Marshon Lattimore and Jaire Alexander, Evans shouldn’t see that level of resistance this week. Kansas City has a strong pass defense but Bashaud Breeland at 5’11 with 4.6 speed just doesn’t worry me to the same degree.

Tom Brady has shown a willingness to target Evans down field on 50-50 balls but even in tougher matchups Evans has appeal because of his red zone usage. If the yardage totals don’t spike, he could get there on end zone fades from short yardage.

I’m projecting the Bucs to be playing from behind in this one…funneling a couple more targets Evans’ way. If you tell me he’s getting 8 to 10 targets, I’m betting on his talent in most any situation.

Speaking of betting on talent…Mahomes came into the AFC championship game banged up but you wouldn’t be able to tell once the ball got kicked off. He was his normal dynamic self, creating plays outside of structure and throwing into windows others wouldn’t dare. He completed 76% of his passes, threw for 325 yards and 3 TDs.

With the Bucs stellar run defense and their pass defense allowing the 4th highest completion rate in the NFL this season, I’m expecting Mahomes to throw early and often in this one, making his floor/ceiling combo too appealing to get away from.

The Bucs gave up the 7th most catches and TDs to tight ends in the regular season but honestly even if that number was reversed…we’re talking about Travis Kelce. Whether it be a safety, linebacker or even a corner he’s made defenders look silly trying to defend him. In the Chiefs two playoff games he has double digit targets in each, has gone over 100 receiving yards in each and has 3 TDs. Outside of the QB’s, Kelce projects as the most bankable player on this slate.

Williams is a nice connector piece at his salary. He will probably be popular, but I think I’ve found some lineup differentiators to balance it. Operating as the lead back in the playoffs, Williams has 13 carries in each game and 5 targets total. I know the Bucs run defense is as tough as they come but i like having the odds-on touch favorite for this prolific Chiefs offense in a game with the highest total in Super Bowl history.

Maybe the most appealing layer of this matchup is the Bucs defense versus pass catching RB’s. They’ve allowed the most receptions and 3rd most targets to RB’s in the regular season. With the Kansas City O-Line banged up versus an extremely aggressive and good Bucs pass rush, we could see more short passing to compensate.

Williams isn’t the type of talent that is going to rip off a bunch of long runs but he’s steady and trusted in pass protection. 8 to 10 carries and 5 targets in this offense could get you more than enough at his price.

This one isn’t without risk, but things seem to be trending in the right direction. Watkins was a full practice participant on Friday. We don’t know what kind of role he’ll be walking back into after this extended absence but when he last played a full game in Week 15, he only played 1 fewer snap than Tyreek Hill.

As I’m projecting a spike in pass attempts for KC, I think Watkins has a better than fair shot to scoop up a good amount of the targets Hill and Kelce leave behind. A worthwhile gamble at his price point and leverage in this lineup that we aren’t playing Tyreek in.

I decided against playing Brady in this lineup with Evans at Capt as a way to get different from the field so I’m going another route to attempt to get the rest of my Tampa Bay options. Last week the Bucs either scored TD’s or turned the ball over, limiting Succop to one field goal attempt but in each of the 3 weeks prior he had at least 3 attempts in every game.

Bruce Arians is known for his “no risk it no biscuit” downfield passing style but that line of thinking doesn’t carry over to his approach on 4th down. The Bucs have the 3rd fewest 4th down conversion attempts in the NFL. Maybe the weight of the Super Bowl forces him to turn the kangol backwards a little more but I’m going to go with the odds that if they get in range, he’s taking 3.

Succop probably won’t be played a lot, gives me solid floor and by going down in price and leaving 1,200 in salary on the table it makes it more likely that this lineup will be unique. That’s a lot of value for 3,800.