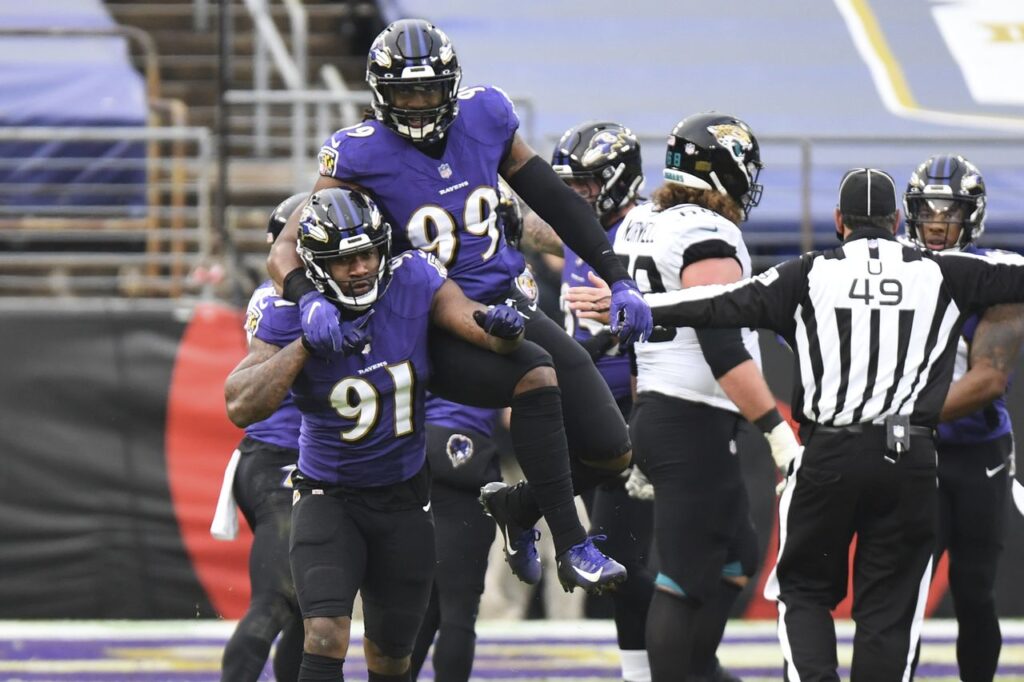 According to OverTheCap.com there are 13 teams that currently sit above the salary cap mark of $180.5M, believed to be the correct number with which the NFL will enter the new league year which begins on March 17th at 4PM. At that time, all teams must be in compliance with the cap via the Rule of 51.

In order to get down to the cap number, these 13 teams and probably a few others, will cut ties with veteran players who could land elsewhere. Oftentimes there is value to be found for those who exert patience. Consequently, the allure of that value could inspire GM’s across the league to slow their roll and wait. And that waiting could place the Orlando Brown, Jr. saga on hold.

Looking back on that conversation between Ben Roethlisberger and Maurkice Pouncey during the Steelers embarrassing loss to the Cleveland Browns in the wild card round, the evidence was obvious that times are a-changing in Pittsburgh.

Big Ben & Pouncey getting emotional on the bench after the game pic.twitter.com/O8sjzT1JsQ

Pouncey has since retired, and now the Steelers are locked up in a battle of wills with their franchise QB. In typical Roethlisberger fashion, he’s made it all about him. I get that he’s put it out there that he’s willing to do whatever he can to help the Steelers alter his contract in order to be in compliance with the cap. But that’s public spin that puts him in a favorable light for sentimental Steelers fans.

If Roethlisberger takes a huge pay cut and accepts the veteran minimum salary for a player with 7+ accrued seasons of $1.05M, he would still represent a $23.3M cap figure. If he opts to play under his current contract, provided the team allows him, his cap number would be a whopping $41.25M. Should Ben retire, the parting ways cap figure is $22.25M.

The guess here is that a pay cut is the only way we’ll see No. 7 in the Steelers colors again – ever, and even then, you have to wonder if the Steelers are simply delaying the inevitable and kicking the can down the road.

Mock Drafts are in full bloom and they are coming fast and furious. PFF recently published a two-round mock that has the Ravens selecting Edge Rusher Gregory Rosseau out of Miami (FL) with the 27th overall pick. PFF describes Rosseau this way:

Size, length, athleticism, bend and versatility are all boxes the 6-foot-6, 260-pound defensive linemen checks, but consistency and production are not.

In the second round PFF has the Ravens turning in the card for Jaelon Darden, a 5’9”, 174 pound slot receiver who is effective on bubble screens and can stretch the field. Sound familiar?

The Ravens don’t need to duplicate Marquise Brown. They need to complement him. And Rosseau hardly sounds like the kind of player the Ravens would risk a first round pick on. Once again, I’m left feeling underwhelmed by the overrated Pro Football Focus.

John Harbaugh has lost nine coaches this offseason. David Culley and Andy Bischoff departed to Houston; Matt Weiss and Mike McDonald are off to join John’s brother Jim at the University of Michigan; Jesse Minter is Nashville-bound to be the DC at Vanderbilt; Brian Duker left for Detroit while Joe Cullen, Sterling Lucas and Zach Orr all left to join Urban Meyer’s staff in Jacksonville.

Harbs’ replacements are solid, including a couple from the collegiate ranks, Keith Williams and Tee Martin who RSR’s Dev Panchwagh covered in detail last week. But the camaraderie and chemistry with players will require adjustment while the coaches must become familiar with the Ravens culture. Both will take some time.

Our first practice is going to be a meet and greet https://t.co/BgNeGhx8Xb

Speaking of adjustments (or the lack thereof) the likelihood of the Ravens using the franchise tag on Yannick Ngakoue seems like a real long shot at this point. Such a tag would eat up roughly $15M in cap space and given the team’s plethora of needs and outward commitment towards improving the offensive line, handing over large amounts of coin to a player who was on the field for a total of just 41 snaps in two playoff games seems like a massive reach.

I don’t think the Ravens were unhappy with Ngakoue, I just don’t think they were happy enough to pony up the dollars he is likely to command in free agency. The same can be said for Matt Judon. Color me shocked if either returns unless the market morphs into one for the buyers.