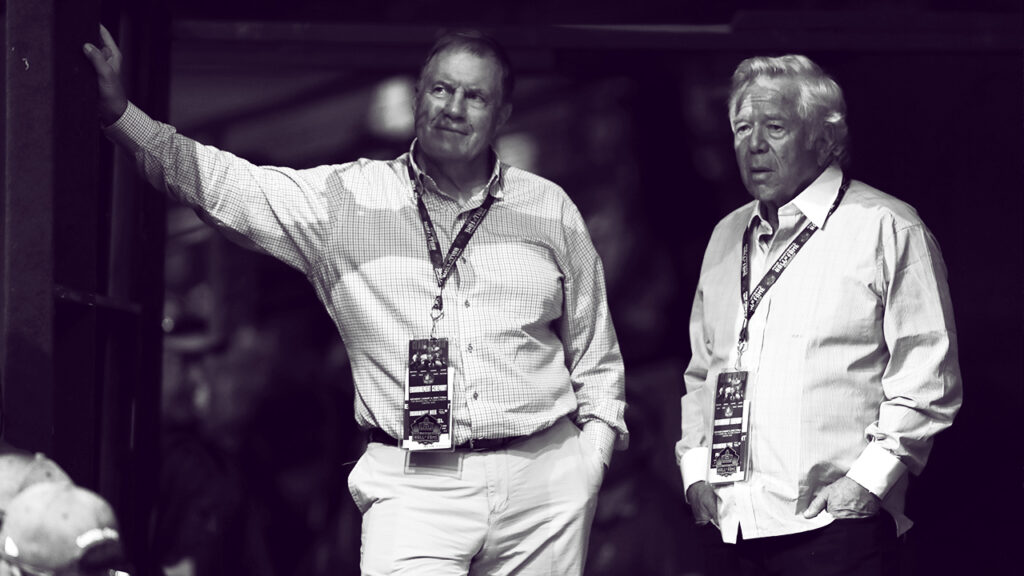 Rarely do you see teams that are labeled “winners” in free agency go on to make a serious push in the playoffs, much less win the Super Bowl. But when the bell rung signaling the first day of legal tampering, the Patriots were off to the races. And today the reached an agreement with Hunter Henry, formerly of the Chargers. The signings have included:

It’s interesting what happens when a team has an extreme sense of entitlement and suddenly they field a bad football team after their quarterback leaves, who incidentally, goes on to win the Super Bowl. There was a time when Bob Kraft and Bill Belichick snubbed their noses at teams leveraging free agency to build a winner. Not so much anymore.

There is an emotional element to the wild spending from Kraft and Belichick. Brady and a (7-9) record triggered it. The thought of mediocrity frightens them. It’s as if they loaded up on free agent Viagra.

Insecurity is a powerful disease.

Bill Belichick on the first day of free agency ???? pic.twitter.com/DtQJ2TP09G

The Ravens, led by GM Eric DeCosta, have been pragmatic and prefer to look for value v. dishing out $31.25M in guaranteed money to a tight end who has 114 career catches in four seasons. That deal extended by the Patriots to Jonnu Smith certainly raises the stakes to re-sign Mark Andrews. The Ravens tight end, comparatively speaking, has 156 grabs over the course of his three seasons in Baltimore.

DeCosta seeks fair deals and he landed one with Kevin Zeitler. The former Giant-Bengal-Brown is a mauler who plays smart. His contract (3 years, $22.5M, $16M guaranteed) is a reasonable deal, particularly when compared to that of former Patriot John Thuney.

New #Chiefs guard Joe Thuney’s five-year, $80 million contract includes $32.5M fully guaranteed at signing over the first two years, plus an injury guarantee that converts to full in 2022, per source. That brings the practical guarantee at signing to a whipping $48 million. ????????

Most would prefer Thuney over Zeitler but the dollars didn’t make sense for the Ravens. Plus, it could be effectively argued that Zeitler is a better fit for Greg Roman’s offense. Thuney is a bit on the small side and his physicality doesn’t translate as well as Zeitler in Baltimore.

It’s interesting how so many media outlets are lining up to declare winners and losers in free agency, just one day in. Their chances of being on the mark aren’t likely to be as solid as your odds at onlinecasinocode.co.uk. Ultimately, the only grade that matters is how an organization handles the offseason in its totality. And the last time I checked, the offseason doesn’t end until the clubs tee it up in September. There’s a long way to go.

That said, the Ravens undeniably lost some talent yesterday and as such, they’ve been labeled losers by CBS Sports Tyler Sullivan. Matthew Judon moved on to the Patriots as noted above, and Yannick Ngakoue agreed to terms with Chucky & Co. in Las Vegas. Judon is a good player who did well in Wink Martindale’s system. His versatility should be a natural fit in the scheme authored by Bill Belichick. But at the price, I’m glad the Ravens passed. They chose not to pay great money to a good player. Right player, right price.

Clearly this player has maturity issues given the way he smeared ESPN’s Jamison Hensley. While Hensley distributed a false report and given his experience, should have known better, Judon’s response on social media was juvenile. And now that he’s landed his fat deal, you have to wonder how Judon will respond, long-term.

The signing calls to mind one that the Patriots made back in 2007 when they inked former Raven Adalius Thomas to what was then the highest-priced free-agent acquisition in Patriots’ history. The deal was for 5 years, $35 million. Thomas played just 3 seasons in New England and retired following the 2009 season. It will be interesting to see if Judon plays out his contract.

There’s a fellow by the name of CJ Golson who claims to be a “National insider”, covering college football for 11+ years. He also adds “Betting/DFS analyst” to his title. Golson hails from LA and has 2,112 followers. Yesterday he posted the following:

SOURCES: #Jaguars and #Ravens are close to a deal that would send DJ Chark and draft picks to Baltimore for tackle Orlando Brown. Jaguars looking for protection for their future franchise QB, and Baltimore gets Lamar Jackson an alpha WR. Wow.

Tony Khan, the son of Jaguars owner Shahid Khan, took to Twitter to respond to Golson.

Thank you for tagging me so I can respond to this. You’re making this up. It’s completely false. I have no idea who you are but don’t get why you’d double down & undermine your integrity. It’s crazy that people tweet these made-up “rumors” & they spread like wildfire. 100% false!

You would think that young Khan (38 y.o.) might have better things to do with his time if he truly is “owner/football analytics” for the Jaguars, particularly during the start of free agency. Instead he engages with someone who most believe is nothing more than a troll.

Entitlement isn’t unique to the Patriots. Khan has been described by a source familiar with the Jaguars, “as a smart guy but one born rounding third base who thinks he invented football”.

All that said, what if Golson is right?