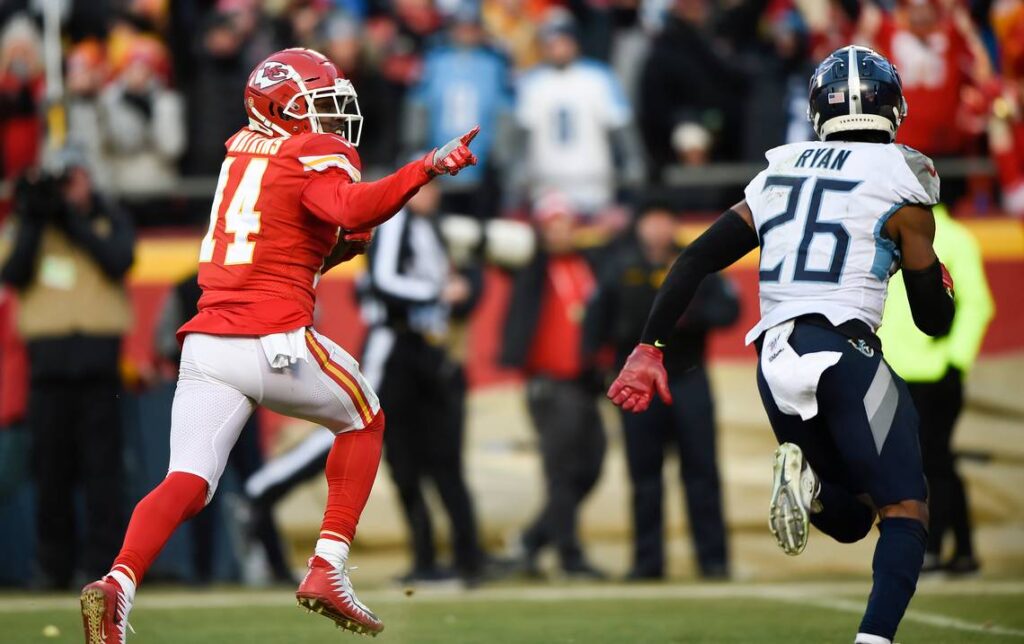 Kansas City WR Sammy Watkins is on his way to Ravens headquarters today to visit with team officials. The stop is one of at least two visits currently planned by the 27-year-old, 7-year vet. Should the Ravens recruiting efforts prove to be successful and he doesn’t leave the building without signing a new contract, the team immediately upgrades the wide receiver room.

But at what cost?

I also get that he hasn’t been all that productive and that he’s missed a lot of playing time due to a variety of injuries – many of the soft tissue variety. Over the course of Sammy’s career, he has missed over 23% of his games. During the past 3 seasons as a member of the Chiefs, Watkins has been sidelined over 35% of the time.

Not feeling the Sammy Watkins to the #Ravens idea. Let’s compare his numbers to Willie Snead in 2020:

Obviously I’ve compared Watkins to unrestricted free agent Willie Snead. I don’t see them as similar players but I think the comparison in production is relevant, particularly in a Ravens run-first offense. And perhaps even more importantly, the comparative value of the two – production v. pay.

U may be right but I’m not really feeling Sammy Watkins. He’s not better than Marquise. Watkins’ highest catch total in the last 5 seasons is 52 & over that time he’s averaged 39 catches, 527 yds, 4TDs & 13.5 YPC. I don’t see him as the contested catch, boundary player they need.

Some have shared my concerns about Watkins on Twitter. Some have blown me up. One guy even called for my resignation and threatened to demand it via an online petition. That said, I still have reservations.

But back to the criticisms of my tweet, I don’t think they’re unfair, despite the nasty tone from some. Many are just fans who are longing for new weaponry for Lamar and they might overlook the warts of a targeted player such as Watkins, and focus solely on a skill set currently missing from the roster.

I don’t give a fuck check again that was a shit article stick to cap analysis. U not telling me Snead better than Watkins in any category. You going off the deep end. We gon sign a petition on ya ass u make some dumb shit like that again.

Defenders of the potential Watkins move, particularly those really annoyed by the Snead comparison, will point out that Sammy didn’t play in as many games. They’ll say that he wasn’t the primary target of Patrick Mahomes in KC. They’ll say he was Mahomes “4th option” behind Tyreek Hill, Travis Kelce and maybe Mecole Hardman. All of these particulars they say, explain why Watkins’ stats are on par with Willie’s. They will reason that in a Ravens offense, Sammy’s opportunities will increase.

But as Mahomes “4th option”, might the players covering Watkins be less accomplished corners than those covering Hill? One could conclude that this should give Sammy an edge, right? And isn’t the KC offense a more prolific passing offense? Rhetorical question. Watkins was targeted 55 times over the course of the 10 games he played, in 2020 (5.5 targets/game). Snead, clearly a less inviting option than Marquise Brown and Mark Andrews, was targeted 48 times in 13 games (3.7 targets/game). The Chiefs threw the football 630 times in 2020 v. the Ravens 406.

Yet despite it all, Snead out-produced Watkins.

There may be merit to the profane suggestions that Watkins v. Snead is an apple and oranges comparison. But there’s also merit in the concern about Watkins’ rather pedestrian numbers despite playing in an offense with such aerial firepower.

Today the Ravens will try and get Watkins to leave their facility as the team’s newest employee. But given his level of production and history of injuries, the hope here is that they do so with a fair contract that has playing time incentives.

Free-agent WR Sammy Watkins is scheduled to visit the Indianapolis Colts on Wednesday after Tuesday’s trip to Baltimore with the Ravens, per sources. Watkins also has drawn some interest from the Titans and Texans.

At the end of today, signing Watkins could be challenging. Others in the mix may drive up Watkins’ price and that could influence the Ravens to overpay. But if they stick to their guns, stick to their “right player, right price” credo, don’t be surprised if the former Clemson Tiger leaves Baltimore still in search of his next contract.

And I would be perfectly fine with such a decision.

What best describes your thoughts about the possibility of Sammy Watkins signing with the Ravens?