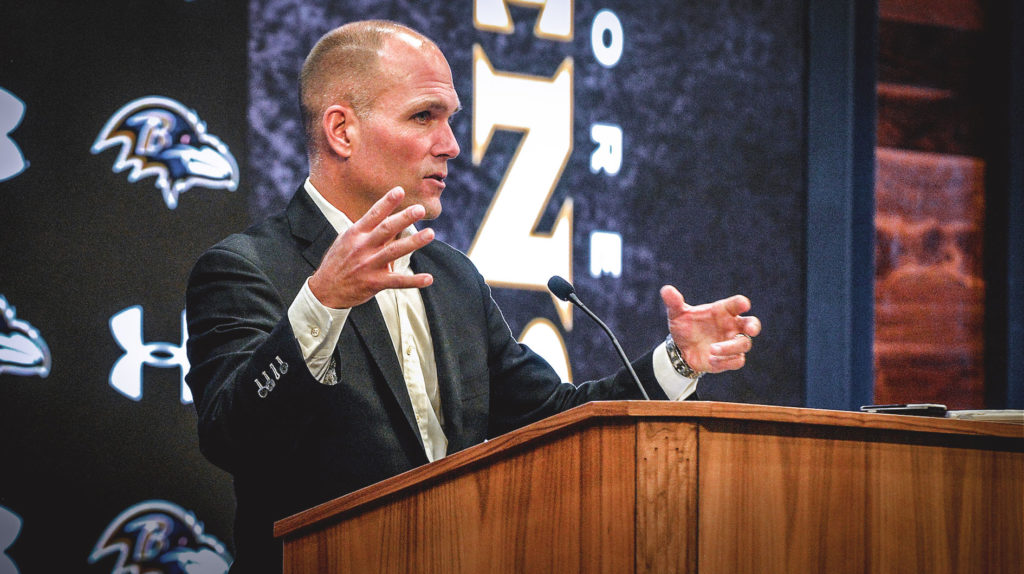 With the conclusion of the second week of the NFL free agency period — one week before the  start of April, when free agency essentially dies before the draft — it’s a good time to peel back the onion of the Baltimore Ravens’ offseason moves.

Heading into the free agency period, the Ravens weren’t exactly flush with cap space to be big players on the open market. The reality is that this organization doesn’t typically spend big in free agency anyway. And despite the angst of fans that want them to spend more and more, it’s proven that spending big on free agents doesn’t lead to more wins. Warren Sharp from Sharp Football Analysis dug into those details in this perspective piece.

Baltimore has followed a time-tested approach for the most part.

They have thus far followed a similar script in 2021. Let’s take a closer look at all their moves.

#Ravens offseason at a glance:

Zeitler was the team’s hallmark first splash signing. Coming over from the New York Giants, Zeitler was released prior to the start of free agency, which made him an even more logical fit because he doesn’t count against the team in the NFL’s compensatory pick formula.

Zeitler is 31-years-old, but he’s still playing at a high level. Some analysts who covered the Giants closely noticed he started to show some age, but upon further review from others, it might have also been the Giants collective line deficiencies that made Zeitler look bad. The theory is that he was overcompensating for their lack of talent.

NFL film guru Brian Baldinger put together this must-see breakdown of Zetiler and how he’ll propel the Ravens run game and shore up their pass protection.

The latter value add is what the team needs badly. If this pass offense is to ever move beyond basement level, the drop-back pass protection (when the team is in clear passing situations) must improve. By all accounts, Zeitler is still one of the best in the game. Not only does he have the footwork but he also has the savvy to handle exotic rush schemes. His presence should help prevent major breakdowns like the one against Buffalo in the playoffs when the offense just missed a touchdown score before Lamar Jackson’s pick-six.

The Watkins addition has been a lightning rod across Ravens nation. Watkins does not fulfill the expectations of the fans and national media of the true WR1 that Jackson needs. Moreover, his checkered injury history has been low-hanging fruit. However, as someone who has been in favor of Watkins’ signing from the start of free agency, I believe he’ll add more to this offense than meets the eye.

At 6’1, 210 pounds, Watkins is a bigger, more physical presence at the X position that the offense lacked last year. He is known for his downfield ability from his days in Buffalo, but since joining the Kansas City Chiefs, he’s transitioned to more of an intermediate weapon who does his damage on crossers, comebacks, and inside routes. That being said, he can still win on isolation boundary routes. He’ll go up and get the football and work through contact. And he clearly has some juice left when you watch him accelerate with the ball in his hands.

The Chiefs’ usage of Watkins is an interesting study though — was he more valuable to them as that rugged inside weapon to create mismatches or is he not capable of beating corners on vertical routes?

My instinct tells me it’s more of an issue of the former, not the latter. Kansas City has speed merchants like Mecole Hardman and Demarcus Robinson who can get deep. But Watkins delivered a ton of value as a middle-of-the-field receiver who can run a variety of routes.

In Baltimore, I expect Watkins to be used outside and inside. He’ll get more chances to win downfield on the boundary against single coverage because the team simply lacks that profile outside the numbers. Watkins “should” complement Marquise Brown and Mark Andrews well and work off their respective routes and alignments when they draw more coverage attention.

My thoughts on Sammy Watkins: a Tweet thread is probably easiest. Between pouring over his performance in KC & doing a Q&A w/ @goldmctNFL from @TheChiefsWire I feel like I know him as a player much better than before.

In respect to value and being able to keep most critical pieces intact on defense, this was a solid group for the Ravens to retain.

The most important cog was Bowser of course. By all accounts, his four-year $22 million deal was a bargain considering there were some projections that had him in the $7 and $8 million APY range.

Bowser is a player I believe has the chance to outplay the value of his contract. In the Ravens’ scheme, under defensive coordinator Wink Martindale, his complete arsenal of skills are on display whereas that might not have been the case if went somewhere else. He can drop, he can blitz from a stand up position, he can rush from a three-point stance, and he sets the edge better than he has earlier in his career.

Now, with the opportunity to play more snaps as a full-time player, I expect his sack totals and overall impact to elevate. Remember, this is a player who was already making the most of his snaps while rotating with linebackers Matthew Judon and Yannick Ngakoue.

What makes the Bowser signing even better is the team was also able to retain Pernell McPhee to handle the edge snaps on early downs. McPhee remains a force against the run, as evidenced by his tour de force against the Tennessee Titans in the playoffs.

The Ravens did a good job of managing McPhee’s snap count in 2020 so he could stay healthy. By keeping him in the fold for another season, they maintain the continuity of their front seven versatility. McPhee is someone who can line up outside or inside, and is a valuable chess piece for Wink to deploy on stunts and other exchanges in his pass rush scheme.

Wolfe and Board round out the other key re-signings. Wolfe was identified as an early priority for the Ravens to bring back. As someone who has dealt with his fair share of injuries and the “injury prone” tag (similar to Watkins), the veteran defensive end played 14 games and was a true rock for the unit when defensive linemen Calais Campbell and Brandon Williams went down with injuries.

Board’s contract extension was a bit of a surprise but the move became clearer when the team decided not to pick up linebacker L.J. Fort’s option, thus making him a free agent. Board is someone who could fill some of the sub package and matchup duties Wink craves from his backups.

This list is clearly headlined by outside linebackers Matthew Judon and Yannick Ngakoue. It seemed inevitable that both players were headed out the door. Judon and Ngakoue were able to cash in on larger contracts — although Ngakoue’s deal was for less than expected.

Still, the decision had to be straightforward for general manager Eric DeCosta and the front office: retain Bowser for a little less money, but let Judon and Ngakoue walk for the chance to earn two compensatory draft picks. Brad Spielberger from Pro Football Focus had this to say about the decision:

“Bowser was one of our favorite signings this offseason in terms of surplus value provided over the contract. In addition, letting Judon and Ngakoue depart puts the Ravens in line to earn fourth-round compensatory picks in 2022 for both players.”

The void left by Judon and Ngakoue is 12.5 sacks and pure edge rush ability to turn the corner. That’s what DeCosta will need to replace because Bowser doesn’t consistently deliver that outside pressure. The draft would be a logical pivot point.

The loss of Ward affects the team’s rush versatility and per-snap pass rush impact. His ability to line up outside and inside is what the team will miss. It may take a veteran addition on the open market — Melvin Ingram from the Chargers has similar outside/inside rush value — to truly capture that instant pressure production.

The losses of Snead and Skura were expected. In the case of Fort, there is still a chance that he might return. But while Fort was a cerebral force in Wink’s defense who consistently made the right decisions, the reality is that the team drafted Patrick Queen and Malik Harrison to eventually tag team the inside backer duties.