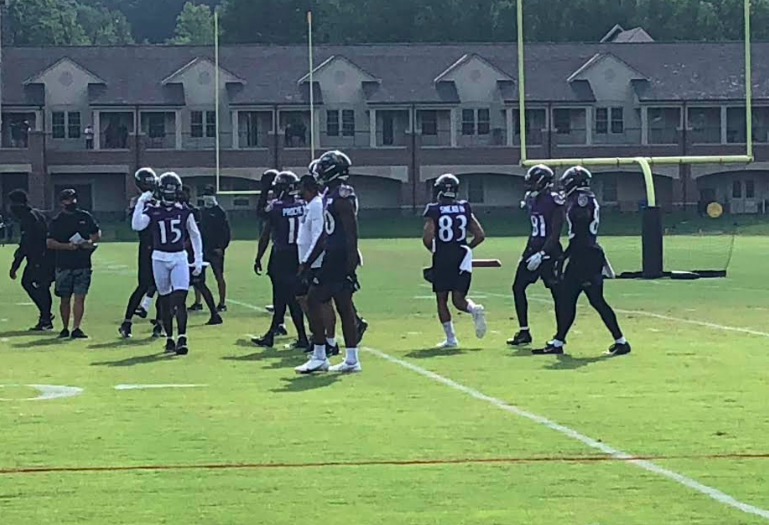 Ravens coach John Harbaugh is envisioning the day when his players can get back to Owings Mills for offseason workouts.

Those practices are vital to the team’s success this season and it appears the league is ready to begin a traditional offseason following the draft.

That’s good news for the Ravens because quarterback Lamar Jackson needs more time to work with his wide receivers to improve timing before the games kick off in September.

The Ravens had somewhat of an advantage last year.

While the NFL didn’t allow teams to practice until training camp, the Ravens had most of the roster intact from the previous season. The one glaring omission was right guard Marshal Yanda and the team did sorely miss him.

However, both coordinators returned after getting looks for head-coaching positions and that helped with the team’s continuity.

Baltimore had the league’s top-ranked running attack in 2019 with a record-setting performance. The Ravens added another playmaker, J.K. Dobbins, in the draft and used many of the same schemes to lead the league in rushing again last season. That running attack helped pave the way for a third consecutive playoff appearance.

However, the passing game did not keep pace and finished the year ranked 32nd in the league in yards and attempts.

Harbaugh is looking to flip the script this year and the offseason workouts will play a key role in executing that goal.

“I think it’s really easy for offensive linemen who have been in the league for 10 years or 12 years to say we don’t need OTAs [organized team activities], because they don’t do anything anyway, really,” Harbaugh said. “Those guys don’t. They don’t need it. But the young guys, the young linemen, they need it. And the passing game, it needs it a lot.

“You need your quarterback and your wide receivers and your tight ends running routes – all the things that we talked about. It’s fine to go get together at some high school field somewhere, and they’ll do that, but to come in here, and to get the timing.”

The Ravens already added two players to help the offense — wide receiver Sammy Watkins and offensive lineman Kevin Zeitler. If Watkins can stay healthy, he can be a solid playmaker for Jackson because he can line up outside and in the slot. He just needs to stay on the field.

Zeitler provides a veteran presence to an offensive line that was exceptional at run blocking but struggled to provide Jackson with more time when he dropped back to pass.

Baltimore general manager Eric DeCosta will add more talent in this year’s draft with seven selections. The Ravens will be able to add a player ready to contribute immediately with the 27th overall pick.

It will be vital to get these rookies on the field as soon as possible to get them acclimated to the team. That was a luxury last year’s draft class could not enjoy.

“We’re talking about the highest level of a sport. In every other sport, they get together for like nine months, 10 months, because those guys, you have to,” Harbaugh said. “And if we want to have a high level of play, then we need our guys … And they want to do it. Guys want to throw, and catch, and run the routes and everything. So, my answer to that is a resounding, yes. We definitely need the offseason program.”