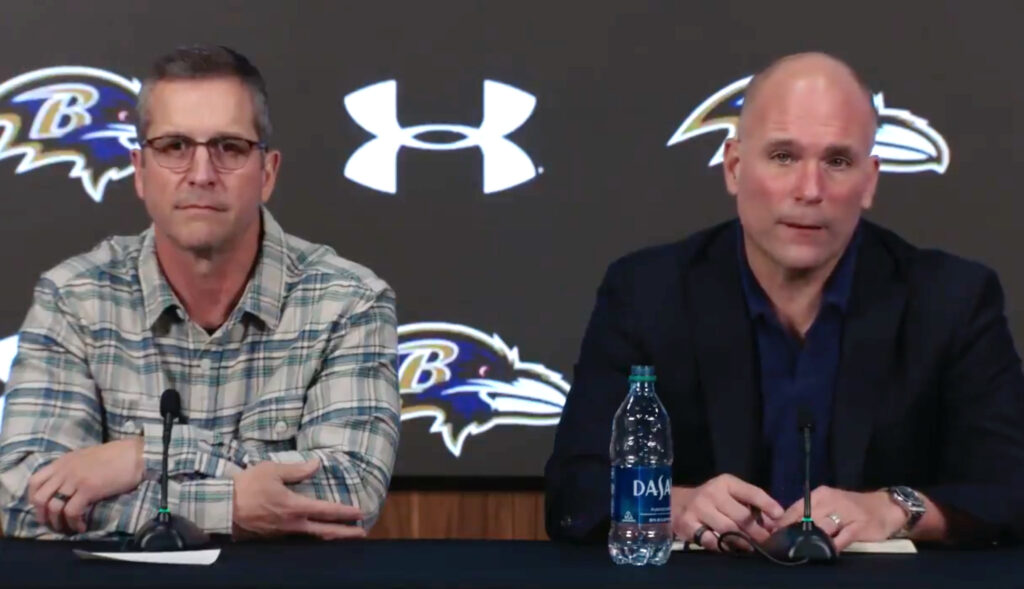 Before the transcripts are shared, I took a few notes during the Ravens Pre-Draft (non) Luncheon. I’ll paraphrase what was said and share my interpretation of the sometimes cryptic messages coming from Messrs. DeCosta, Hortiz and Harbaugh.

Eric DeCosta tried to put a spin on reports of players in which the Ravens have shown interest. The assumption being that visits to Owings Mills by free agents means that the team has sincere interest in said players.

There’s a level of gamesmanship that has developed during the age of technology and the rapid flow of news and gossip. Agents want the world to know of interest in their clients. It helps to drive up the price for the players and obviously that flies in the face of the team’s objective.

DeCosta went so far as to say that the Ravens will bring in players even if the interest isn’t sincere, in order to deceive other teams. That’s savage and you’d have to think that such disingenuous visits might upset players and agents. But if the visits are structured the right way, a free steak dinner from the Ravens to help drive up demand for a player, has some degree of win-win in it.

Think back to what now appears to be fake interest from the Ravens in WR Kenny Golladay. The move may have forced a decision from Juju Smith-Schuster and it may have scared the Giants into handing out a very rich contract to Golladay in a depressed market. The speculative move triggered a win-win for the agent (Todd France), the player and the Ravens, although Juju’s decision wasn’t the one the Ravens hoped for. But at least they forced some movement and were able to move to Plan B.

“The draft is deep in wide receivers.”

Count me among those who don’t see the Ravens using pick No. 27 on a wide receiver. There was a lot of talk during this presser about finding the right player for the Ravens – the right scheme, culture and other behavioral drivers that suggest a player is a hit or a miss FOR THE RAVENS.

DeCosta and Joe Hortiz both pointed out that they look at how the Ravens win games so it’s important to bring in players who embrace the way the team approaches winning. Selecting a receiver at No. 27 you have to wonder if such a pick, given the quality of player at that point relative to a similar player in Round 2, might not make the Ravens all that much better in 2021. Perhaps an edge rusher, playmaking safety, O-lineman or an interior defender who can push the pocket might impact the coming season more.

If there’s improvement in the Ravens passing game it will likely be the result of:

It won’t necessarily come from a receiver who is a borderline second-round player.

Hortiz would later go on to say that he believes the next couple of seasons will be rich in wide receiver talent. Maybe that’s a better time to take another receiver with a first-round pick. That might track a bit better with the arch of Lamar’s developmental curve as a passer.

Eric was asked how players opting out of the 2020 season due to COVID might affect their value on draft boards. He said that the opt outs do create anxiety and that for some players it might be 400 to 500 days between competition in live games. That could affect some players more than others, but ultimately it depends on the makeup of the player, his personality, the position he plays and the program he’s played for.

This added layer of evaluation, unique to the pandemic season, is likely to skew draft boards across the league due to varying levels of uncertainty.

Currently these are the Ravens 2021 draft picks:

It is highly unlikely that each of these picks will be made in this exact order. DeCosta is known to move around throughout the draft and this year will be no exception. Many draft analysts believe that there is quality in this particular draft between picks 50-100. I could easily see the Ravens dropping back 7-10 slots from No. 27 and pick up another mid to late third rounder.

During this presser, DeCosta alluded to the forward thinking of the organization, saying they’d like to manage a total of 20 additional picks between the 2022 and 2023 draft. That’s a number they are comfortable with and one that seems to fit the early projection of roster attrition. They don’t want to have more than that number of picks because the team wants to be certain that the picks can actually make the 53-man squad.

The thought was not only interesting, but also evidence of how the personnel group manages the roster from a micro (short-term) and macro (long-term) perspective.

DeCosta made it clear at the outset of the presser that he would not be answering questions about free agents who may or may not visit the Ravens. The rationale is simple and understandable. It does nothing to benefit the team.

Earlier today, about an hour before the pre-draft presser, Ian Rapoport reported the following…

A piece of interesting free agent news: #Steelers FA OT Alejandro Villanueva is set to visit the #Ravens this week, league source said. With some moving parts on Baltimore’s O-line, they plan to check out Villanueva in person.

No word from Adam Schefter who for my money, is a superior NFL insider.

Now, keep in mind that Schefter has a really good relationship with DeCosta. He was in one of the Orioles’ suites with the Ravens GM at a recent Orioles v. Red Sox game as part of EDC’s 50th birthday celebration. Is it possible that Schefter may have opted not to report the visit as a solid to a friend?

Consider Villanueva’s background as a military man, his respect of country and law enforcement. It doesn’t take much imagination to envision an instant connection with John Harbaugh.

And then there was this…I noticed DeCosta looking at his cell phone a few times during the presser. It could have been a ploy – after all this presser was once called the “Liar’s Luncheon”. It may have also been an update on some personnel activity sent by others in the building.

Villanueva graded out as the league’s 28th ranked tackle, three notches behind Orlando Brown, Jr. If he’s signed could a corresponding move be a trade of Brown? Incidentally, if traded, moving Zeus, Jr. would not only land the Ravens an attractive draft pick, it would also trigger a $2.6M cap savings ($3.38M – Rule of 51 offset of $0.78M). 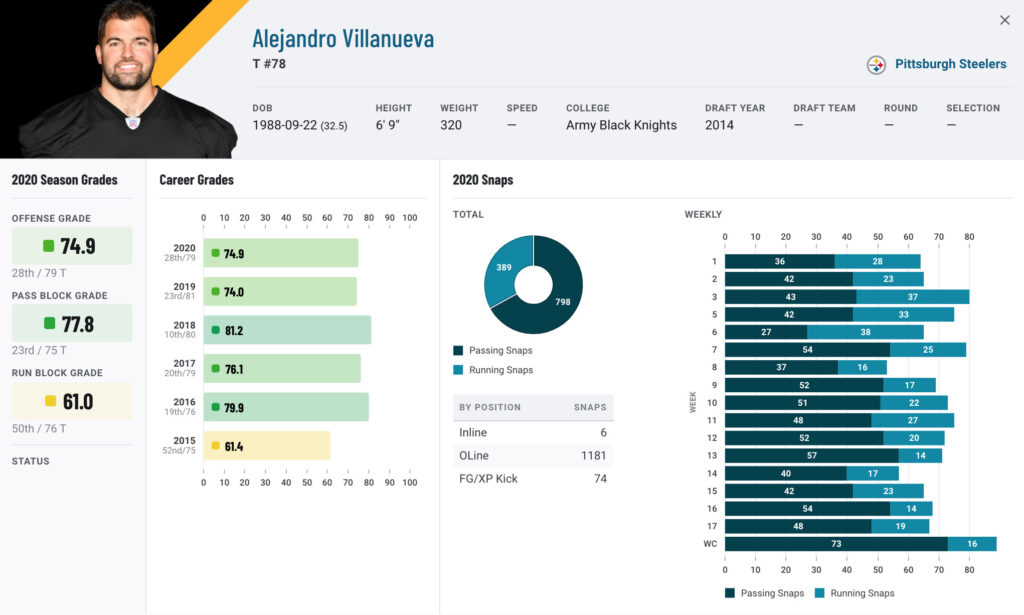