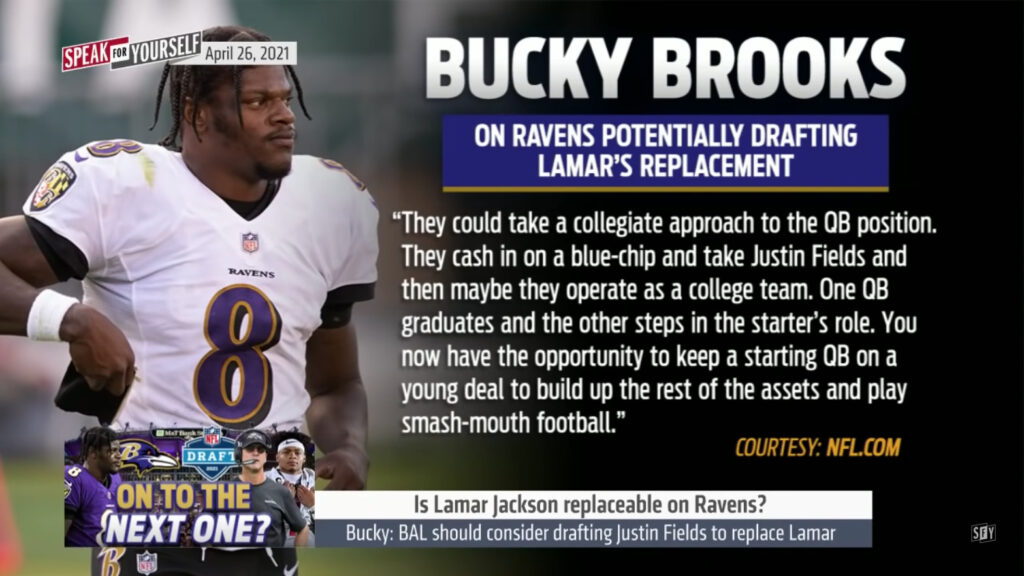 Yesterday Bucky Brooks was a popular target for critics after he made a few suggestions to the Ravens about how they should manage Lamar Jackson and his contractual future.

“[The Ravens] could take a collegiate approach to the quarterback position,” Brooks said. “They cash in on a blue chip, they take Justin Fields and then maybe they operate like a college team.

“One quarterback graduates, the other quarterback steps into the starter’s role. You now have the opportunity to keep a starting quarterback potentially on a young deal, build up the rest of the assets, and then play smash-mouth football the way that they play and continue to build a better team around the quarterback. It’s something to think about.”

I understand what Brooks is trying to get at here and for a lesser talent than Lamar, the strategy has some merit. But to suggest that Fields is a mere plug and play into the Ravens system and they’ll enjoy the same success or more by adding pieces around Fields is just crazy. Lamar has the potential to be a generational superstar.

Now for you Joe Flacco fans, you won’t like this much, but I was all about such a strategy with him. I was all about moving on from Joe after his rookie contract but on the tail end of a Super Bowl MVP, the Ravens had no choice but to sign Flacco to what was then the richest contract in league history. Looking back, I wonder if the team would handle things differently.

Be that as it may, check out what Marcellus Wiley’s argument in support of Lamar. It’s pretty compelling and that’s more than you can say for anything that Brooks dishes – NFL Draft included.