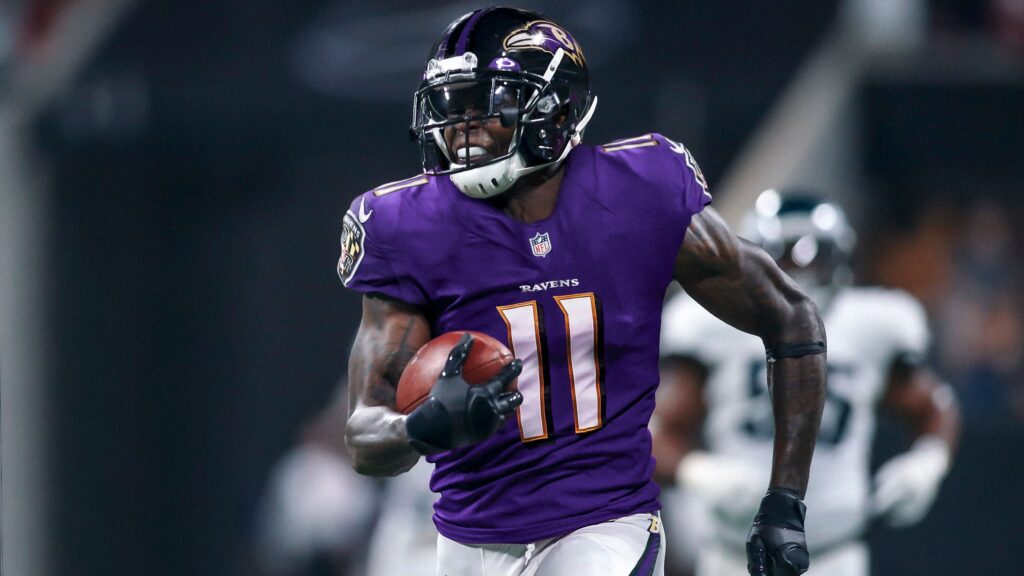 Multiple sources have suggested that the Atlanta Falcons are open to dealing Julio Jones. The Falcons are dealing with a challenging cap situation which could handcuff them during the season, once full rosters and practice squad members are set. Trading Jones after June 1 represents a cap savings of $15.3M and the Falcons with about $2.4M in cap space, could use the added cushion.

There is no cap “magic” with a Julio Jones trade, or any other. Here are the #Falcons‘ options:

According to Sportsline.com the Ravens are the favorites for the services of the 32 year old, 7-time Pro Bowler.

Julio Jones’ next team if he is traded by Atlanta:

Jones is set to be paid $15.3M this season. For the Falcons he carries a cap figure of $23.05M. Next season Jones’ numbers drop as does his guaranteed money as shown in the chart below.

Jones’ skillset is the missing ingredient from the Ravens offensive arsenal. As an X receiver, he very well could be the X-factor in a re-tooled Ravens offense. Jones masters the boundaries. He’s among the best at contested catches and his combination of size and speed oftentimes requires the attention of two defenders. He’s highly dependable and a big inviting target on underneath routes against soft coverage. And his post corner routes are a thing of beauty.

Now granted, he is 32 and in the October of his career. But we’re not talking an AJ Green-like decline in his skillset. Jones, when healthy, is still a premier receiving target in the NFL.

Last season Jones was limited to 9 games but in the six seasons prior to 2020, Jones played in 92 of a possible 96 games. Plus he’s a physical player willing to support the running game. If you doubt his competitiveness or physicality, check out this video clip…

Julio Jones might be the dirtiest safety in the game ???? pic.twitter.com/mKdjLBF3RN

So maybe you’re thinking, ok, Jones track record of availability is pretty good. Maybe you’re even thinking that the best wide receivers in Ravens history, Derrick Mason (31), Anquan Boldin (30) and Steve Smith, Sr. (35) all became Ravens at the age of 30+. So why not Julio at 32?

Then of course there’s the cost to acquire Jones. Here’s what Pro Football Focus came up with in terms of draft capital needed to bring in the pass catcher who has averaged 6.3 catches and 95.5 YPG during his 10-year NFL career.

Still with me so far?

Now arguably, the toughest part of all. Can the Ravens afford Jones?

I asked RSR’s capologist Brian McFarland to come up with a contract structure that would be consistent with what Julio is scheduled to be paid for the balance of his contract, but also fit into the Ravens cap picture. Here’s what Brian came up with…

Brian went on to point out that if Eric DeCosta’s intent is to sign free agent edge defender Justin Houston and tackle Alejandro Villanueva to contracts on or after May 3rd, the team would likely need to restructure the deals for Ronnie Stanley, Marlon Humphrey, Justin Tucker and Chuck Clark which would trigger cap savings of $10M. None of these restructures should be an issue since each player is likely to remain with the team without any expectation of decline in play. In other words, the Ravens aren’t kicking the can down the road only to take on dead cap space later on with these restructure candidates.

So if you can get comfortable with Jones medically, pay him the money he’s owed under his current contract by sacrificing two picks in 2022, would you do it?

Think about it, the Ravens could then spend their draft capital in 2021 to address the offensive line, edge rusher and perhaps safety. And then imagine a strong offensive front combined with skill position players named Lamar, Dobbins, Andrews, Jones, Watkins and Brown.

Trading for Jones is an aggressive move, but one if structured as described above, has the potential to get the Ravens over that Divisional Round hump and deep into the playoffs.