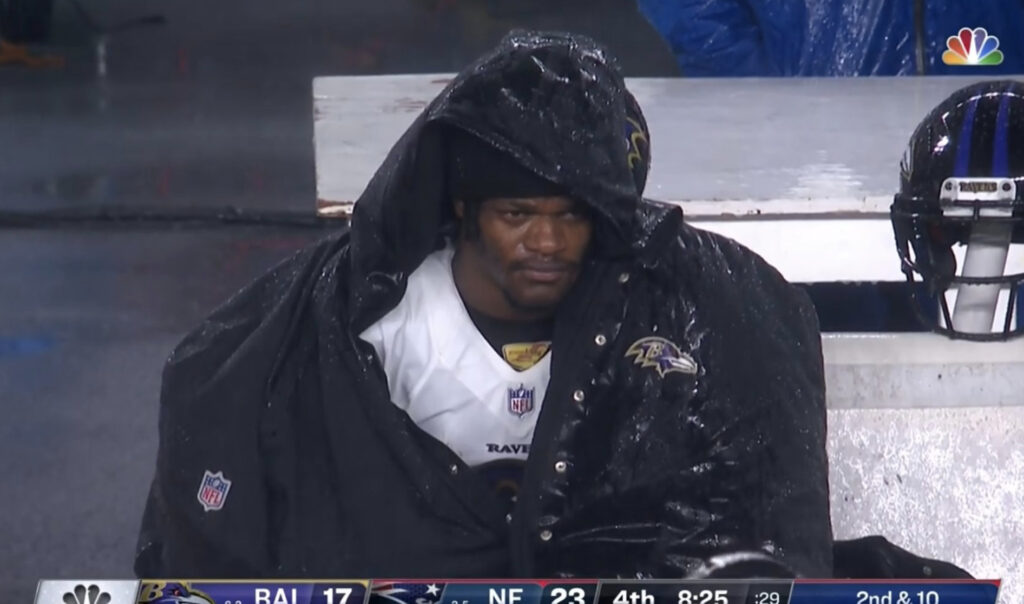 This week, Bucky Brooks made some local and national headlines when he mentioned the idea that the Ravens could move on from Lamar Jackson and draft a player like Justin Fields.  Without getting into the aspect of if Fields (or anyone else in this draft) is worth the investment, I wanted to explore the idea of simply moving on from Lamar.

This a concept that is largely tossed away and laughed at by the local fan base…and who can blame them? The team has gone to the playoffs every year since Lamar has been here and finally managed to advance last year before losing to Buffalo in the divisional round of the playoffs.  Lamar is exciting, a great leader, a winner and displays traits we’ve rarely seen from a QB in Baltimore.

However, the question is, do we really want to pay him like a top-five QB for years to come?

I think we can all agree that Lamar’s speed and athleticism are what separates him.  I think we can also agree that he has improvements to make in the passing game.  Where the disagreements come is when considering how much (if at all) he needs to improve from what he is now for the team to win a Super Bowl.

Is he already a good enough passer that his detractors are just searching for problems, rather seeing the good things?

I think it’s fair to ask all of those questions.

As many great traits as Lamar Jackson possesses, one of the most important right now is his salary. The surplus value the Ravens have with him allows them to do many things, such as sign free agents and keep their own (Ronnie Stanley, Marlon Humphrey for example). However, once they pay him the $45ishM salary, those luxuries are gone, a fact that even Eric DeCosta talked about at the most recent liars’ luncheon.  He spoke about how signing Lamar will make them operate differently than they have in the past.

To me, the worst thing you can do in sports, in terms of contracts, is sign non-elite players to elite money deals and nowhere is that more prevalent than the NFL and QB contracts.  I went back 10 seasons and looked at the top 10 QBs per season that had the biggest cap hits (using overthecap.com).  Of those 100 QB seasons total, just 46% of them made the playoffs and only three Super Bowls were won. 2020 was an anomaly year compared to the rest. Not only did we see a Super Bowl win out of the top 10 but eight out of the 10 highest QB cap hits made the playoffs.  The next closest was six, in 2016, and most seasons saw just three to five of those QBs make the playoffs.

I think we can all agree that, over the past decade, QBs like Ben Roethlisberger, Russell Wilson, Tom Brady, Aaron Rodgers , Peyton Manning (at least for past of that past decade) and Drew Brees have been the elite guys.  Of the 46 QB seasons where they were top 10 in cap hits, 26 times that group six QBs made the playoffs. That was out of 34 times appearing on the lists. That is 76% of the time. The rest of the QBs made the playoffs 30% of the time and some of those names were guys like Philip Rivers, Matt Ryan, Andrew Luck and Eli Manning; all players who have some case (perhaps a weak one for all but a case nonetheless) for being Hall of Famers or, at least a guy who may have been looked at as elite, especially in the case of an early retiree like Luck.

Let’s look at a player like Matthew Stafford. Now, Stafford has had some injury issues and the Detroit Lions aren’t a good organization.  He had a Top-10 cap hit six times but made the playoffs only twice, never winning a playoff game.  Is that worth the enormous investment?  Would the Lions have been better off dealing him for a big package of picks and starting over?  I think it’s probably fair to say that they would have been.

Don’t get me wrong; the above analysis doesn’t take a lot of other factors into play. How good is the organization they are in?  What about injuries to either the player himself or key players around them?  I know there is some flaws there but it’s still a good baseline to determine if the contracts were good ideas or not.

This is the dilemma the Ravens (and really every other NFL team) have.  Do you pay the QB the big money?  Dallas has fought with this dilemma for the last few years and finally paid Dak Prescott his money.  Personally, I view Dak as a very good but not elite player (apologies to Dominque Foxworth).  We will see if Dak gets better and proves me wrong but I would guess the Cowboys will not win a SB with him and that their playoff probabilities look similar to the above: 30-35% of the time they are in.

If the player is elite, you pay him, especially your QB.  Going back to Jackson, is he elite?  Most say yes. Personally, I am not sure.  If you put a gun to my head, I am saying no right now because I believe that this sport is built around the idea of winning through the air and I am saying Lamar cannot beat teams through the air right now.

Could that change?  Absolutely, although I do admit that I expected to see a bigger improvement from 2019 to 2020 than we did.  Some of that isn’t his fault.  Covid-19 screwed some of that up and I still think he needs one more dynamic, big-play WR and a much better passing scheme to get better, so I don’t want to lay this all at his feet.

My biggest concern for Lamar is: what happens when he inevitably loses some speed and athleticism?  Father time catches everyone.  He doesn’t have to see a huge drop-off for him to not be superman anymore. When that happens, what Lamar Jackson do we get? Do we get an elite QB that can still carry a team or do we get a guy who is still very good? If he is “just very good,” he isn’t worth $45M per year and that contract will definitely be a detriment to the team.

This is really the basis for what Bucky Brooks is saying.  How good is Lamar long term?  Where is he as a QB at age 28, when he is in the middle of a huge contract?  Does that set the organization back?  Are you better off trading him for a haul, having all those assets and a lot of money or do you go with what you got and not take the risk that the next guy flops and really pushes you back as an organization?

I think the Ravens sign him and I think most fans rejoice in it. I think he is a great ambassador for the team and the city in many ways but if they sign him, I will be holding my breath and hoping that when he gets into his late 20s that he has become a much better thrower of the football and that he can lead an offense that can go out and beat a Patrick Mahomes or Josh Allen or whoever in January and win a Super Bowl.