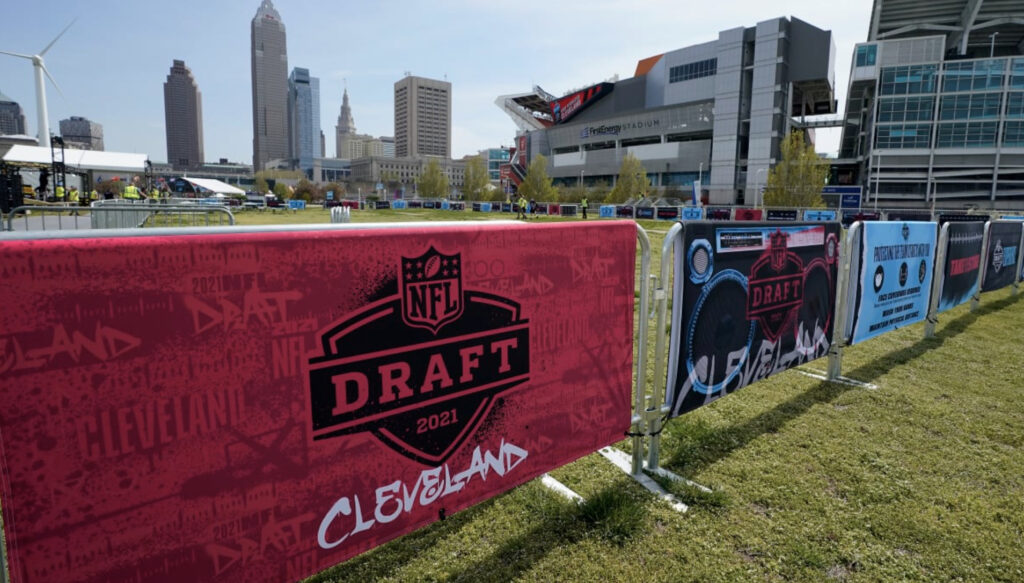 The 2021 NFL Draft kicks off tonight in Cleveland. What will we see happen as the picks fall? The Ravens are set up nicely with two first-round selections. RSR Staff give their Bold Predictions for Day 1 here.

The Ravens will make both of their first-round picks at 27 and 31. They will walk away with an edge rusher and an offensive lineman (but not necessarily in that order). They will remain quiet on the trade front until Day 3 when they package their pair of 5th round picks to move up towards the top of the round where they’ll take an interior defensive lineman. Overall, the Ravens will make eight picks that will include: Two edge defenders; two O-linemen, the aforementioned 5th round interior D-lineman, a safety, a slot corner and wide receiver.

Wide receiver will not be addressed until the 4th round.

My prediction for Day 1 is we’ll see a run on offensive tackles which will impact the Ravens’ selections and/or their plan to make a trade up or down the board. However, with any run on a position, there is always the opportunity for the top players at other positions to slide to Baltimore — part of the reason their BPA strategy is so time-tested. We’ll see one of those BPA players available for general manager Eric DeCosta and his front office to pounce.

Also, I would not be surprised if the Ravens draft a WR with one of their first-rounders. The valuation of WR is all over the place. Teams perceived as threats have other needs as well. The board could really work out in the organization’s favor. Rashod Bateman from Minnesota seems like the most logical fit and might be too good to pass up at pick No. 27.

I doubt the Ravens make two selections on day one. I also don’t believe they will select at WR in the first round. I think the choices will be an edge player and offensive tackle. The Ravens have proven to find both pass rushers and offensive lineman in the later rounds, but I think they want impact players now at those positions. With the losses of Orlando Brown Jr., Yannick Ngakoue, and Matthew Judon, the Ravens cannot afford to wait on developmental players.

My hopes for the first round would be Teven Jenkins and Jayson Oweh. If Jenkins is gone (which he probably will be), I’d be happy for the Ravens to take two edge rushers. I’d be happy with any of the top 5 ranked edge rushers that fell to 27 or 31. I know the knock on Oweh was no sacks last year but his insane athleticism in Wink Martindale’s scheme would be a very nice fit.

Just like every year, Ravens fans are clamoring for a wide receiver. I understand the concerns, but I think using a first-round pick on a team that is a run heavy offense just isn’t using the resources efficiently. Most are wanting Rashod Bateman or Terrace Marshall Jr., and I wouldn’t be mad at either of those. However, I think there is a better option that the Ravens shouldn’t pass up on if he’s there and that’s Elijiah Moore. He’s just the type of receiver that could’ve made a difference in the Buffalo playoff loss last season, a catch and run specialist and excellent in zone coverage that can take a five or 10-yard pass and get another 10 or 20.

However, the first round shakes out I’ve learned to trust Eric DeCosta and the front office. The last time I wasn’t happy with a pick they took Lamar Jackson.

The Ravens are more likely to trade up than down. Don’t get me wrong, I still want them to trade a first-rounder for a few Day 2 picks, but I just don’t think they’ll get a good enough offer. A lot of teams are rumored to be trying to trade back, so the Ravens may not have many suitors for either of their first two picks, and they won’t force a bad trade. They’re more likely to pick the best players available at 27 and 31 and leverage later draft capital to move up into the second round.

The Ravens could trade up if one of the top WRs falls out of the top 10. While this would be out of character for the team, the upside for any of the consensus top three wideouts is too much to ignore, especially outside of the top 10. The Ravens follow the Johnson trade value chart almost religiously, and the 27th and 31st picks combined are worth between the 10th and 11th pick. If a run on offensive tackles claims their top targets, they could trade into the top 15 for a receiver and potentially add a Day 3 pick in the process. They would certainly have to wheel and deal to move back up into the second round to address needs, but I could see them swooping in on a coveted target for Lamar Jackson.

The Ravens do not pick a tackle and an edge rusher in the first round. Those are the two clearest and largest needs for the Ravens, but the Ravens a) have other needs and b) have a history of a BPA strategy. If Trevon Moehrig or Christian Barmore fall to 27, don’t be surprised if the Ravens snap them up. If they can’t strike a deal to move back into the second, they also may go ahead and take a top center prospect like Landon Dickerson if their favorite edges and tackles aren’t available.

We’re in the end game now. No more mock drafts, no more talking heads, no more crazy takes about Quarterbacks graduating and being replaced in this draft by other Quarterbacks, no more finding absurd reasons to justify why certain Quarterbacks won’t be taken highly.

It doesn’t matter that he went on to become All Big-Ten for the two seasons he started in Columbus and a Heisman finalist, it doesn’t matter about your in-depth evaluation of him on film…Justin Fields got beaten out by Jake Fromm about 12 years ago – that’s why he’s going to slide on Draft night.

It’s all nearly over and we finally get to the real deal.

So, my bold predictions for night one of the 2021 NFL Draft start there, with Fields. No more smokescreens, no more noise – the San Francisco 49ers trade up to draft Justin Fields and the draft starts in earnest with that pick at number three – the guy who is currently the longest odds of all three Quarterbacks, after Wilson and Lawrence go 1 and 2, to be taken in that spot.

Some of my other, non-Ravens (marginally) bold predictions:

— Jaycee Horn will be the first defensive player selected.

— The first three Offensive Tackles will come off the board before the third Wide Receiver is drafted.

— Levi Onwuzurike will be selected in the first round.

— No Running Backs will be selected in the first round.

— More than the record of six Cornerbacks will be drafted in the first round – if I had to guess the seven: Jaycee Horn, Patrick Surtain, Farley, Stokes, Newsome, Samuel Jr., Campbell

— Kellen Mond gets drafted in the first round.

As for the Ravens, it’s hard to be bold with your predictions as it seems so certain that they will trade at least one of the picks either up or down. But I do believe…

— Trevon Moehrig, Christian Barmore or Creed Humphrey will be the first of their position to be drafted when the Ravens select one of them with their pick at either 27 or 31.

— The Ravens will trade back from one of the two first rounders in a trade package that secures them a pick next year.

With the 27th pick, I believe the Ravens will be looking for an edge rusher. If he falls to them, I think they will be happy to run the card up (at least virtually run) to take Georgia edge defender Azeez Olujari. He has a combo of very good developing pass rushing skills, as well as the ability to set the edge. He is perfect for the Ravens scheme.

With the 31st pick, I believe the Ravens will trade down with Dallas for picks 44 and 75. I think the target at 44 is IOL, with Landon Dickerson being at the top of the list if he is still there.  If the Ravens were to stay at 31, I think the Terrence Marshall injury news stops them from taking a WR, so they look to go secondary or IOL.