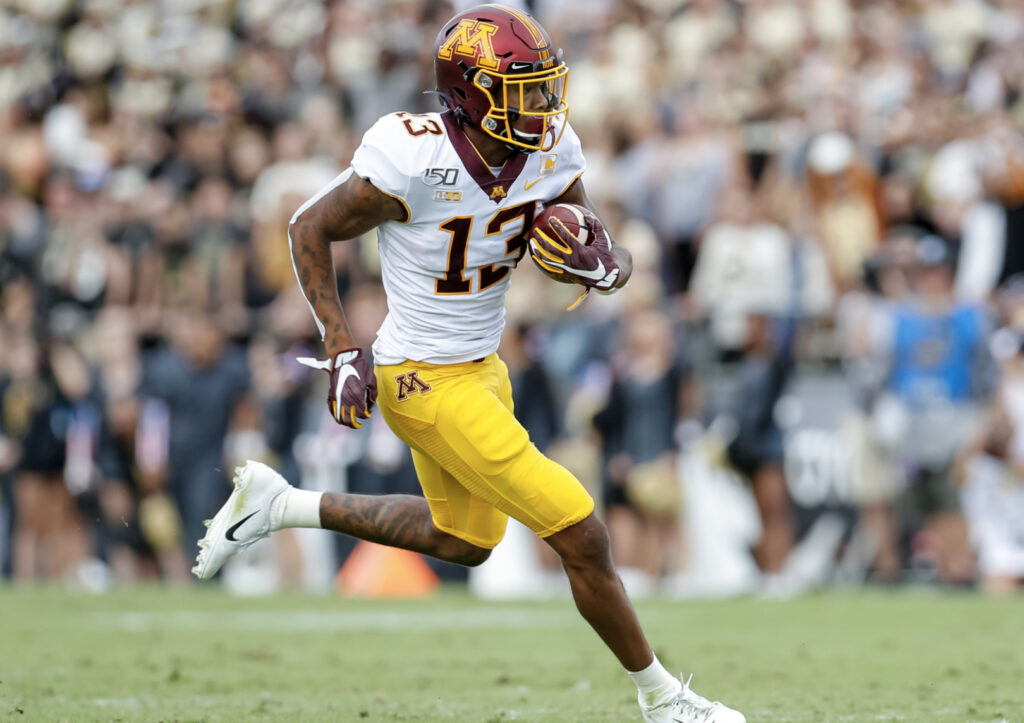 With the 27th pick in the 2021 NFL Draft, the Ravens selected Rashod Bateman, Wide Receiver from the University of Minnesota.

Rashod Bateman fell to the Ravens and the fan base should be happy.  There were so many good players on the board at the time and I wasn’t sure who it would be. Lamar gets another target that can work the middle of the field or on the outside.

With Marshall having questionable medicals, Bateman was the only WR left that made sense for the Ravens. Great route runner who graded out very highly according to PFF.

Legions of Ravens fans will be happy, and for good reason. Bateman is the prototypical ‘X’ receiver that the Ravens badly needed, and he’ll be an immediate contributor on the outside. He has a smooth release and is shifty before and after the catch. With so many good players on the board, they took the one most likely to be gone by 31, and I can’t fault that strategy. He’ll be a great target for Lamar Jackson working the sideline and across the middle.

Well, there it is!

Bateman has been #RavensFlock' consensus pick since the very beginning of the 2021 #NFLDraft process.

The #Ravens add help at outside WR for Lamar Jackson.

Most were pleasantly surprised that Bateman remained on the board for so long. The speedster (4.3) caught a ball in all 31 games he played in as a Gopher and racked up 19 touchdowns and 10 100+ yard games. He can get off the line against press coverage, can stretch the field, and can burn after the catch.

But happy for the Ravens Flock who have been faithful that this pick would happen. Y’all WILLED THIS PICK. Welcome to the Flock, @R_bateman2!! 😈😈😈

Plenty to get into but I'm absolutely stoked. My favorite WR after the big 3. pic.twitter.com/PTLCfyuKLz

The comp to Keenan Allen is a good one. Similar type of concept of a sneaky long/big body WR with electric footwork and a filthy release from the line. Can work against press, which the Ravens need big time. I also dusted off the old Chris Chambers comp but Bateman isn't as fast.