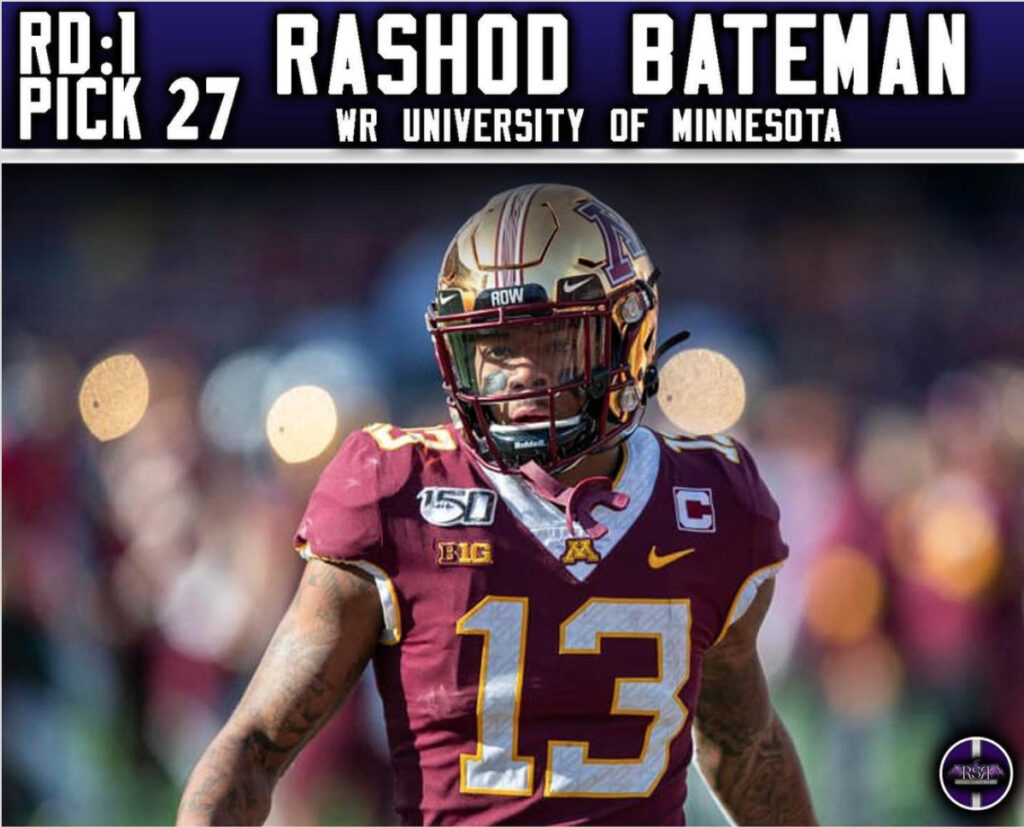 In Christopher Nolan’s The Dark Knight, there’s a famous scene in which Harvey Dent (Two-Face) explains how Gotham City is ready to step back into the light: “The night is darkest just before the dawn. And I promise you, the dawn is coming.”

With the selection of wide receiver Rashod Bateman from Minnesota at pick No. 27, general manager Eric DeCosta just turned the light back on in Baltimore.

For the better part of two months now, wide receiver is all anyone could talk about in respect to improving a much-maligned, over-the-top ridiculed passing game. Fans wanted a WR. Media wanted a WR. But did the organization want one?

Everyone seemed to think they did not. They even hinted at the lack of urgency and need during press conferences with the media. Just two weeks ago, DeCosta stood up for the current WRs on the roster, saying he was “insulted” that people keep saying the team doesn’t have receivers.

However, if you paid close enough attention, the tea leaves were all there after the 2020 season ended unceremoniously in a stinging playoff loss in Buffalo. Head coach John Harbaugh said right after the season, he’d love to bring in an “Anquan Boldin” type, big-body X type WR. Then you had this clear, aggressive hunt in free agency.

They targeted JuJu Smith-Schuster — a receiver who is physical and plays a Ravens brand of football. They targeted T.Y. Hilton as well, who at 31, still can get deep and could have possibly pivoted to the slot. Ultimately, when those two veterans decided to re-sign with their teams, Baltimore added wideout Sammy Watkins. But on a one-year deal.

Look, I’m the biggest Watkins advocate there is. Everyone who exchanges with me on Twitter knows this. But even I noticed the one-year commitment was quite telling.

It was evident to me at least that the Ravens would absolutely draft a wide receiver. No Watkins past 2021. And with Chris Moore and Willie Snead gone as well, that left at least one roster spot open.

As much as DeCosta backed Miles Boykin, Devin Duvernay, and James Proche publicly, they all have clear holes and shortcomings in their game. Even with the additions of new wide receivers gurus Keith Williams and Tee Martin, it would have been way too much of an ask to expect them to raise their games so dramatically. Boykin is the furthest along for sure but struggles to gain separation and use his size/strength to post up cornerbacks; Duvernay is still a raw prospect with limitations in his route tree; Proche is more nuanced but lacks the size and speed to be more than a possession type WR.

The answer was Bateman all along. He was the absolute obvious fit.

A squeaky-clean route runner who had a top-10 separation rate according to Pro Football Focus over the last two seasons he played. Bateman’s entire game is predicated on gaining separation with a nuanced release at the line, quick stop/start footwork, and suddenness to shake loose from defenders. His use of dizzying moves to back corners off and bait them into false steps will remind fans of Keenan Allen. But his acceleration to the ball is shades of Stefon Diggs.

Running routes and getting open on the boundary isn’t always the most sexy quality from WRs. But it’s what the team needed. Especially from the line against press coverage.

But Bateman can also win against zone and off coverage. He reads defensive backs and their leverage (positioning on the field) at a master class level. He can find the soft spots in zones and he’ll pivot away where defenders are positioned. Plus, he has slot experience. These traits all align with Jackson’s strengths throwing the ball inside the numbers.

Which brings me to Bateman’s abilities on the perimeter: the area of the field most scrutinized in this passing game. Quarterback Lamar Jackson has mostly lived on the inside, intermediate pass completions. Force him to hit boundary completions and he hasn’t been quite as sharp or efficient.

Part of the struggle has stemmed from not having pass catchers who he can trust with timing and the ball skills to win on contested throws in tight quarters (aside from tight end Mark Andrews). The thought the entire time from observers is that he needed a big, prototypical basketball-style target. That’s why LSU WR Terrace Marshall seemed to make the most sense on paper.

Bateman though may look slight — at 6’0” and less than 200 pounds — but he’s wiry and plays bigger than he looks. Bateman has long arms (think back to Chris Chambers), a tremendous catch radius, and he competes for the ball in traffic. For what he lacks in pure deep speed, he makes up for it with his overall ball skill savvy to outmaneuver DBs. He’s also more explosive after the catch than meets the eye.

Add in Bateman’s ability to run the complete route tree and operate from all three WR positions on the field, and you have exactly the type of receiver Harbaugh has alluded to wanting all offseason. Remember, in offensive coordinator Greg Roman’s scheme, the receivers are not bound to a specific side of the field and are expected to play anywhere.

In my estimation, at worst, Bateman has the ability to be a very good No.2 type WR who can complement Marquise “Hollywood” Brown — who is still growing, evolving, and has a lot of untapped upside to unleash.

At best, Rashod Bateman could be this year’s version of A.J. Brown from the 2019 class. Brown went after Hollywood, N’Keal Harry, and Deebo Samuel but ended up as the best receiver in that class.

In either scenario, the 2021 first round pick should give the franchise exactly what they need from the position, and perhaps even more importantly, what Jackson needs to keep taking his game to the next level.