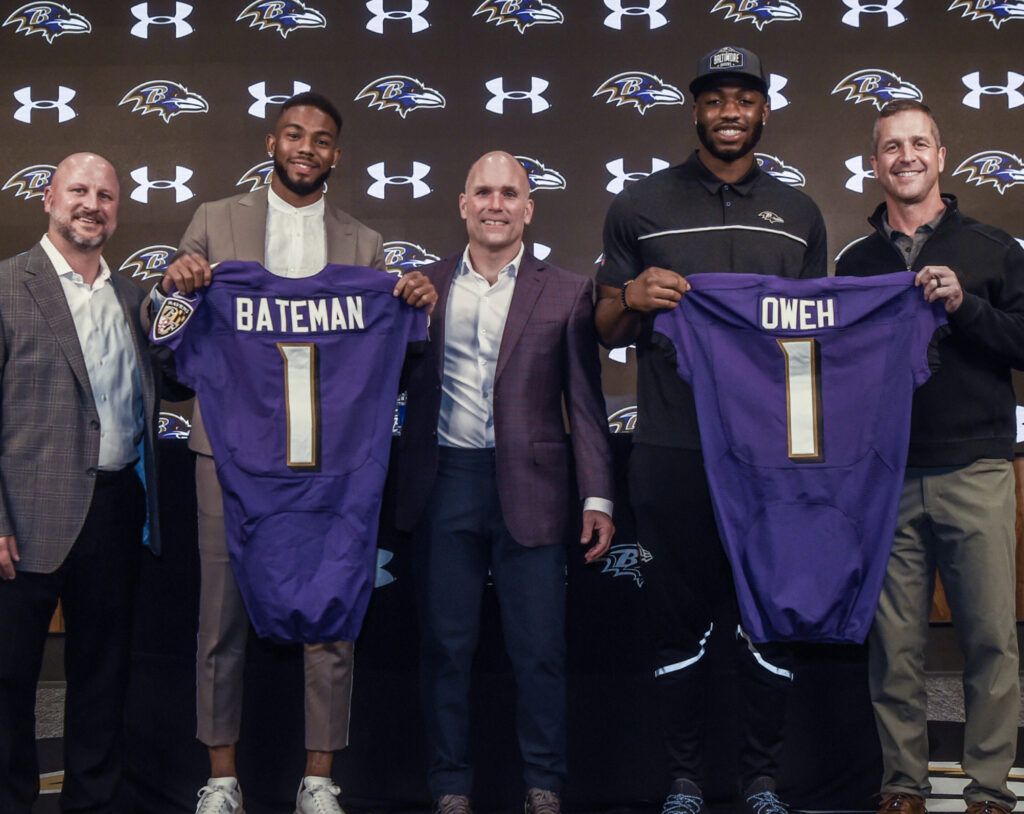 Eric DeCosta did it again.

The Ravens GM earned stellar grades across the board for his performance in the 2021 NFL Draft.

The team addressed needs at wide receiver, edge rusher and on the offensive line, adding eight new players to an already deep roster.

DeCosta also revealed an intriguing strategy by taking players ready to make an immediate impact and others with a high upside that need more time to develop.

“We just tried to pick good players, guys that could do multiple things, guys that fit us personality-wise,” general manager Eric DeCosta said. “We tried to pick smart, tough competitive guys. Quite honestly, if we had a choice between two players and they were equal talents, we always defer to the guy who lives like a Raven, so to speak.”

Here’s a breakdown of the potential impact of the 2021 draft class.

Analysis: Bateman was a player linked to the Ravens in several mock drafts. He has the versatility play inside or outside and could develop into a key target for quarterback Lamar Jackson.

Outlook: Bateman will compete for a starting job opposite Marquise Brown

Analysis: The Ravens needed to boost their pass rush and Oweh had a chance to become a disruptive force. He has impressive size — 6-foot-5, 251 pounds — but his sack numbers were underwhelming. Nonetheless, Oweh has the versatility to be a perfect fit for the Ravens’ system.

Outlook: Oweh will push for a starting job, especially after the Ravens lost three of their top pass rushers — Matt Judon, Yannick Ngakoue and Jihad Ward — to free agency.

Analysis: Cleveland is an imposing 6-foot-6 and 343-pounds. He is nicknamed “Big Country” and has eaten squirrels. Cleveland is quick for his size, running a 4.85 in the 40-yard dash.

Projection: Cleveland will get the chance to start at left guard, especially if Bradley Bozeman moves to center. Either way, he’ll be part of the rotation on the offensive line, especially with his experience in the SEC.

Analysis: Stephens was a bit of a surprise pick at this slot because he needs more time to develop as a defensive back. He began his collegiate career as a running back at UCLA before transferring to SMU in 2019 to make the transition to cornerback. He was a quick study and was solid in coverage.

Outlook: The Ravens are deep at cornerback so look for Stephen to make another transition into being a safety. He’ll make most of his impact on special teams as a rookie.

Analysis: The Ravens have a crowded wide receivers room with seven players capable of making the final roster. However, Wallace was too talented to turn down in the fourth round.

Outlook: The Ravens have high expectations for Wallace and he’ll get enough reps in training camp to prove he should play a vital role as a rookie.

Analysis: The Ravens want to make sure they have depth at cornerback, especially with the talented group of wide receivers in the AFC North. Wade is a playmaker when he is healthy.

Outlook: Wade can work himself into the rotation in the secondary and will also get an opportunity to play on special teams.

Analysis: Hayes is a high-character player that fits the Ravens and is solid in coverage. The Ravens have solid, young depth at defensive end.

Outlook: Hayes will get a chance to be active on game days at SAM.

Analysis: Mason could be Pat Ricard 2.0. Mason can play fullback, tight end and on the defensive line.

Outlook: Mason can make his mark on special team and eventually play a role on the offense.