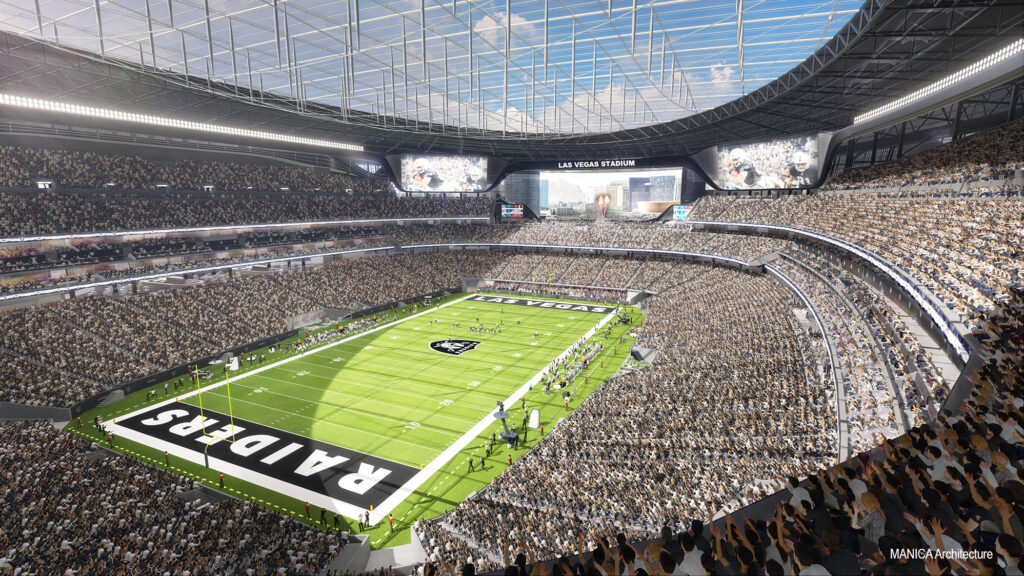 I often marvel at how the NFL can so adeptly take an annual formality like the publication of the league’s schedule and shape it into an event that dominates social media and prime time television viewing.

Yesterday I found myself scouring various sources, texting others, to somehow piece together the Ravens 2021 schedule before it was officially announced at 8PM. I then watched the talking heads on NFL Network pontificating about the nuances of each team’s schedule. And then it suddenly dawned on me after listening to the blowhard named Michael Irvin, senselessly babbling for the umpteenth year in a row about how the Cowboys would represent the NFC in the Super Bowl, that I just wasted most of my day.

I already knew who the Ravens opponents would be. Did the sequencing really matter all that much? It’s not as if I could change it or the team could change it. The schedule is what it is. That didn’t stop people like NFLN’s Cynthia Freland and other click-driven crackpots from not only blathering endlessly about the schedules, but also “treating” us to their predictions for the season’s 18 weeks.

Hopefully the experience proves to be a lesson learned and I’ll invest my time more efficiently in years to come. But I doubt it. The NFL is too damn addicting. That said, when the schedule does drop, it is interesting to study it, to analyze its ebbs and flows and understand its benefits and challenges.

So let’s do that now with the Ravens 2021 schedule… 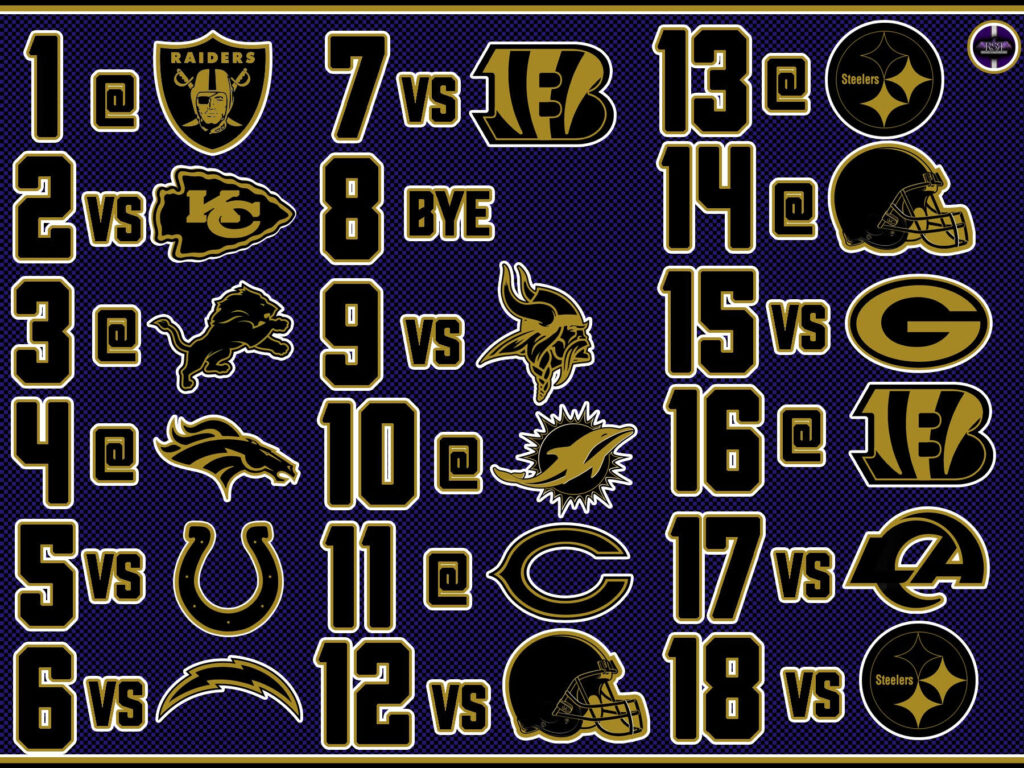 • No surprise that the Ravens open on the road given the calendar of their Camden Yards neighbor. The Orioles host the Blue Jays on September 12, so the Ravens couldn’t play that day. The only way around the obstacle, would have been to schedule the Ravens at The Bank on Monday night, an O’s off day. But the allure of a prime time, glitzy Sin City presentation was too hard to ignore. The Ravens get to battle a team in Vegas with a questionable offensive line and a generous defense to get their season jump started. Plus, they get a trip to the Pacific time zone out of the way early while they are still fresh.

• One more thought on the Raiders game. I’m told that the get-in number for the opener at Allegiant Stadium is $500 per ticket. Those are the nose bleeds! My advice to those interested in going, is to book your flights, wait it out and then see if you can scalp tickets just before the game. If you can’t get a desirable seat at an affordable price, watch the game from a sportsbook. Can you imagine what the tickets for Super Bowl LVI will go for in LA’s SoFi Stadium?

• Game 2 against the Chiefs on Sunday Night seems like a no brainer for the league. But…advantage KC! Patrick Mahomes and Co. get the benefit of a full week between games after playing at home. The Ravens are forced to play on a short week after a Monday Night game out west which will deliver them to Baltimore early Tuesday morning.

• Three of the first 4 games are on the road including another western trip to Denver on October 3. Fortunately, the Ravens next game isn’t until Monday night, October 11 when they host the Indianapolis Colts which begins a lengthy stretch at home consisting of 5 consecutive weeks in Charm City, including four games and a bye week covering October 4 through November 10 when they depart to Miami for a November 11 Thursday night affair against the Dolphins.

• The Ravens don’t play an AFC North rival until Week 7 when the Bengals come to Charm City. Five of their last 7 games are against their northern foes including back-to-back-to-back games against the Browns, Steelers and Browns.

• After the Ravens host the Browns on Sunday night, November 28, the Steelers come to town for a 4:25 game on December 5. Immediately after that the Ravens travel to Cleveland to take on the Browns again who will be working with a decided advantage. While the Ravens engage in their regular slobber-knocking battle with Pittsburgh, the Browns are off during Week 13. It’s highly unusual to play the same team before and after a bye. The league dropped the ball on that faux pas!

• Eric DeCosta was recently asked what he looks at first when a new schedule comes out. He said he looks at the December-January games. Four of those six contests are against divisional foes and only two are road games – both trips to Ohio. 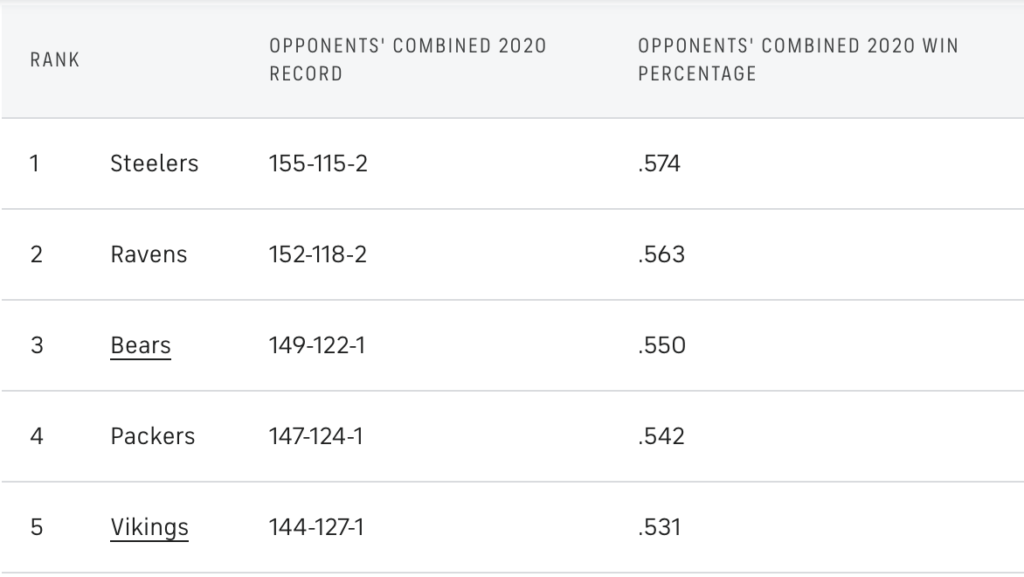 Much has been discussed about the Ravens strength of schedule which is the NFL’s second most challenging. Only the Steelers is more daunting – on paper. But let’s keep in mind that for the Ravens, the number is inflated a bit by Pittsburgh’s 12-4 finish in 2020. The Steelers dropped five of their final six games including an embarrassing 48-37 playoff loss at home to the Browns. It’s also worthy to note that the results of last season aren’t accurate measuring sticks for the level of difficulty in the games ahead.

There will almost always be a team or three on the respective schedules that falls well short of expectations and others that surpass modest projections. That’s just the way it is in the NFL. Who those teams will be is anyone’s guess. Put me down for a sub .500 season for the Steelers, Mike Tomlin’s first, and a Packers team that is on the verge of crumbling. And while not on the Ravens schedule, I see the Seahawks caving in 2021 followed by another Pete Carroll bailout, leaving the program in shambles like he did when he escaped USC in 2010.

Hey, did you see how John Harbaugh learned about the Ravens 2021 schedule?

“Eric DeCosta…quite the prankster! He wanted me and my friends to surprise you by revealing the schedule…” ????????