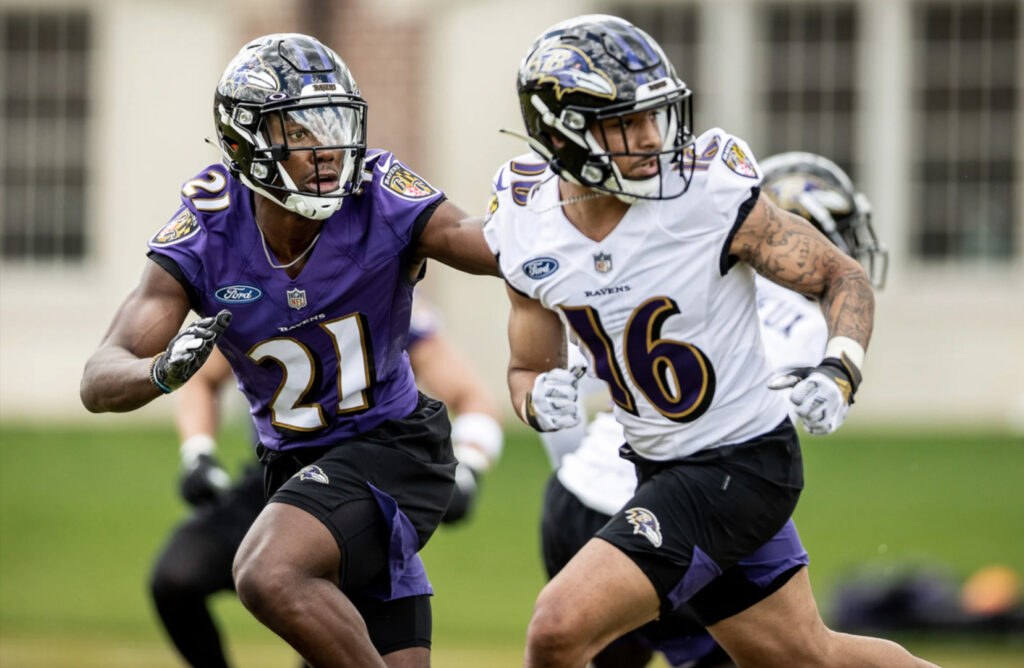 A total of 23 players comprised the May 14-15 rookie roster that was distributed to the media although there were several players, including the aforementioned Blake Gallagher, who were in attendance for a tryout…This list also includes 5 players who were with the Ravens in 2020, mostly of whom were on the practice squad…Ben Mason was excused because he apparently played his feet raw on Friday. Jake Breeland was also absent from camp. Breeland missed all of 2020 due to a knee injury suffered in 2019. His absence today raises some eyebrows. He has the potential to make the team.

Speaking of tight ends, Eli Wolf moved impressively throughout practice and was the standout at his position today. Undrafted signing Tony Poljan by comparison, lumbers through his routes and isn’t as smooth…Tackle Adrian Ealy looked a bit more polished than I expected. There may be something to build on with the former Oklahoma Sooner. Word is that O-line coach Joe D’Alessandris is looking forward to working with Ealy…I spent some time watching Anthony Weaver work a few interior defenders, the most impressive of which is Xavier Kelly. Kelly carries his 306 pounds well and looks to be a pretty good athlete, at least when observing during individual drills. He packs a pretty good punch off the snap.

Rashod Bateman fielded some punts. Bateman snatches pass balls in flight effortlessly with strong, extended hands but looked inexperienced catching missiles from the jugs gun. I had the binoculars on him during one attempt and he caught the punt with his elbows – successfully. Both Bateman and Tylan Wallace are crisp route runners and sell their fakes well. The pair stood out from the group of receivers although WR Jaylon Moore, a holdover from last year, had a solid practice.

During individual drills with the secondary, DB coach D’Anton Lynn put his group through some exercises designed to improve agility and change-of-direction skills. The group consisted of Brandon Stephens, Shaun Wade, Nigel Warrior (2020 PS) and Ar’Darius Washington. Stephens is the biggest of the group, listed at 6’1”, 213 LBS and his backpedal and explosion in and out of breaks was second only to the 5’8” Washington…Tough to really determine how effective running plays are given the nature of practices in shells, but UDFA RB Nate McCrary didn’t seem to get much traction, at times looking a little indecisive. Instead of planting and moving northerly, he seemed to reach for the boundaries only to have the plays strung out…the new starting long snapper was a lonely guy today. There were more special teams coaches on hand than specialists.

Quote of the Day

John Harbaugh on Ben Mason’s absence: Ben [Mason] had trouble with his feet yesterday. He had just a bad shoe situation and really had some legitimate problems, in terms of tearing the skin off his feet. So, that’ll grow back quickly, I’m sure. (laughter) So, that’ll grow back quickly, I’m sure, and he’ll be OK. He goes hard. He went so hard yesterday [that] he tore the skin right off the bottom of his feet.”