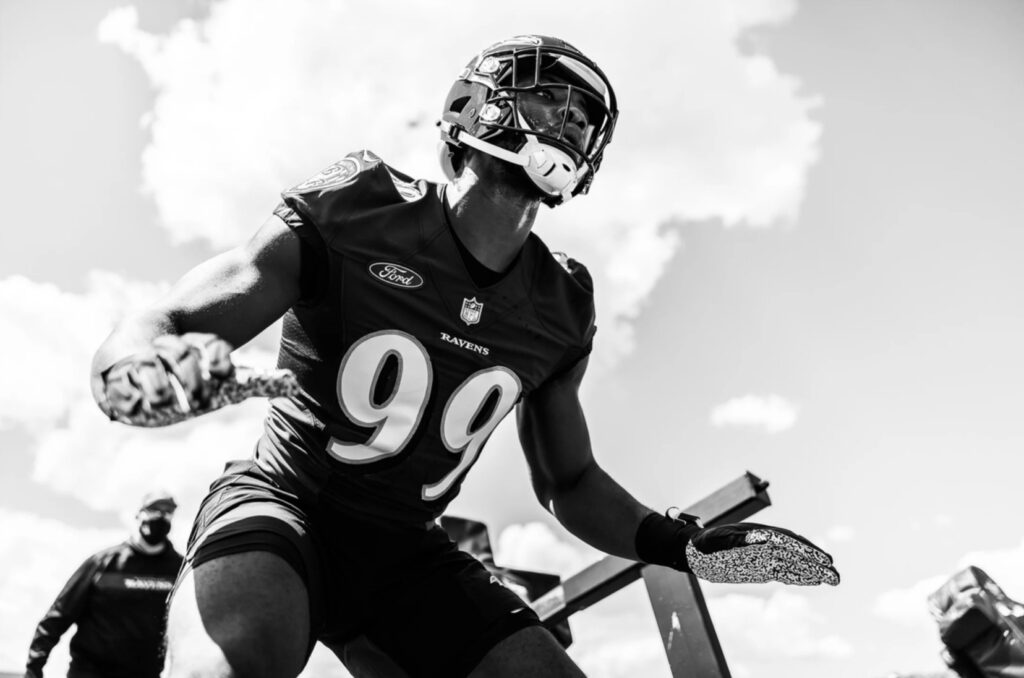 Baltimore Ravens director of player personnel Joe Hortiz took some time with the Baltimore media to share the key traits and characteristics that stood out on film about the team’s 2021 draft picks.

Here is a general recap of the most noteworthy analysis and my impressions:

What the Ravens and Hortiz like about Rashod Bateman (WR, Minnesota)

My take: It’s clear that the Ravens value Bateman’s “pro-ready” game. One of the elements of his game that is a bit undersold is that he can get upfield in a hurry. Bateman has a knack for positioning himself in front of defensive backs well, and Hortiz kept pointing to his ability to read depth and leverage.

What the Ravens and Hortiz like about Odafe Oweh (OLB, Penn State)

My take: The confidence that the team has in Oweh’s ability to play the run is quite evident. He is already operating at high level as an edge setter and you can see that in his overall technique. The impressive part is that he also uses subtle moves and instincts to win 1-on-1 matchups against offensive linemen in the rush game. Given Penn State’s scheme requires their defenders to read the run first and then play pass, there is a natural chance for Oweh to get more dedicated, pure rush chances in Wink Martindale’s scheme.

What the Ravens and Hortiz like about Ben Cleveland (OG, Georgia)

My take: As I’ve alluded to in my overall post-draft view of Cleveland, he is a giant man but quite nimble and moves well for his size. In the pass pro game, he shows a natural feel for pass rush games/blitz schemes and an understanding of exchanges that defenders might try to run.

What the Ravens and Hortiz like about Brandon Stephens (CB/S, SMU)

My take: Stephens might be raw but he shows processing and recognition on the field, which reflects his overall high football IQ. There is a lot to like about his physical ability as a whole, but for the Ravens, the fact that he’s already ahead and shows natural instincts is a major plus.

What the Ravens and Hortiz like about Tylan Wallace (WR, Oklahoma State)

My take: Wallace’s physicality has been on display throughout the pre-draft and post-draft discussions. But that physicality is especially an asset for the brand of football the Ravens play. He looks for contact and he doesn’t opt to get out of bounds quickly.  Hortiz also alluded to Wallace’s value as a rugged and imposing blocker.

What the Ravens and Hortiz like about Shaun Wade (CB, Ohio State)

My take: We know the Ravens like having versatile players on the whole, and Wade’s inside/outside game is a valuable asset. Although there were overall concerns from draft analysts that Wade struggled with his outside coverage in 2020, his film was much better prior to the injury.

What the Ravens and Hortiz like about Daelin Hayes (OLB, Notre Dame)

My take: Hayes is actually a more nuanced pass rusher than meets the eye with a pass rush plan and array of moves. In the Senior Bowl especially, he was disruptive. He just has to play with better play strength when it comes time to bring down the quarterback. Hayes has an overall complete game but could realistically be a surprise standout rushing the passer as well.

What the Ravens and Hortiz like about Ben Mason (TE, Michigan)

My take: Mason’s game definitely fits with what the Ravens traditionally like to do with their H-Back and TEs. His ability to locate as a blocker off several releases reminds me of Kyle Juszczyk. The question is how much he’ll make an impact in the passing game, but the potential is there.