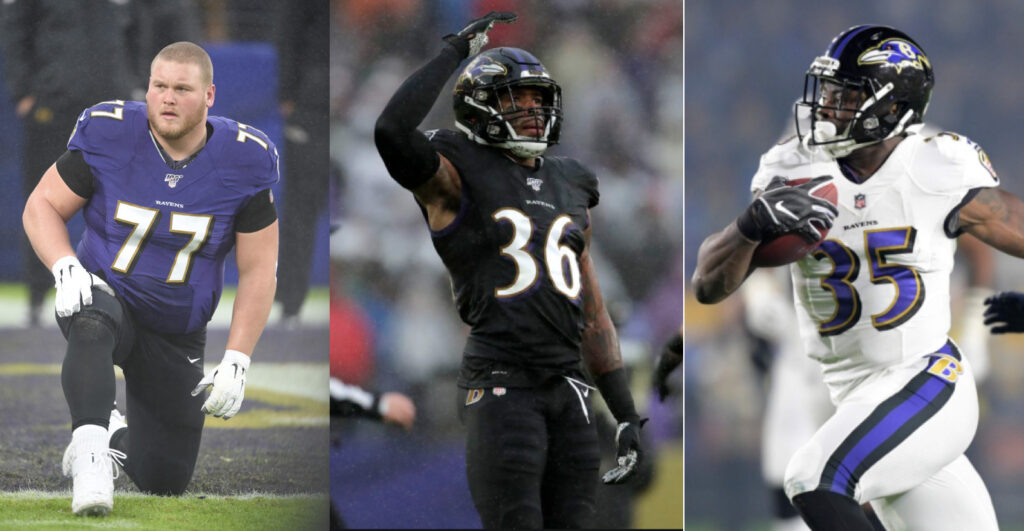 Guiding Lights: Three veterans that young Ravens should be watching

Top pick, undrafted free agent or second-year player trying to discover success in the NFL, there is plenty going on in the head of a young player — particularly one trying to find his place on a playoff-veteran roster like the Ravens.

For starters, there is a different level of physicality and speed you are up against every day in practice than you consistently saw in college. There is the star-struck nature of being in a locker room with Lamar Jackson or Marlon Humphrey or Ronnie Stanley. There is a playbook that features more details than TMZ stalking an athlete outside a strip club.

A lofty draft status might cement one’s place on a roster, particularly in the first couple of years, but nothing lasts forever. You are as good as what you put on tape and how much development the coaches see up close. Breshad Perriman was a first-round pick, and the Ravens cut the cord with him before he finished out his rookie contract. Anthony Levine was signed as undrafted free agent with Green Bay, spent a couple seasons working hard on their practice squad and got picked up by the Ravens. He’s now entering his 10th season with the team and has played in 129 games, according to Pro Football Reference.

Your career is what you make of it — injuries notwithstanding.

We mentioned Jackson, Humphrey and Stanley earlier, and they are tremendous examples of first-round picks who have put in the work and commitment — paired with first-round athletic ability — to find success and become All-Pro players. There are others, like Nick Boyle and Patrick Ricard, who have blazed their paths to NFL success through gritted determination and the general temperament of a sixth-grade bully who wedgies all those who dare step in his path.

But let’s take a look at three other Ravens who entered their Baltimore careers with little to no fanfare or expectations, and have crafted excellent careers for themselves. If you are a young player hoping to carve out a place in this league, and for this team, you might want to emulate how these three success stories go about their business.

Bozeman came to the Ravens as a sixth-round center out of Alabama. While a good player for a powerhouse program, expectations for a career of note were low for Bozeman, and he still managed to get on the field for 14 games his rookie year, getting one start. The next season, Bozeman somewhat surprisingly came out on top of a heated competition for the left guard spot, and he started every game — a feat he reproduced this past season, as well.

Bozeman’s improvement on the field speaks to his commitment and intelligence, and while he has sometimes struggled with one-on-one assignments against premier interior linemen, many of the Ravens’ long runs last year included Bozeman pulling or engaging a second defender on the play — you know, “hustle” plays.

Off the field, well, Bozeman was the 2020 Ravens Walter Payton Man of the Year recipient for his community efforts with wife, Nikki, with at-risk children and bullying. We’ve seen careers derailed by making poor decisions off the field. Young players would be wise to take note of where Bozeman places his energies when not at the Ravens’ facility.

Obviously, nobody knows how Bozeman will perform in his new duties as the Ravens’ starting center, but it’s safe to assume he’s going to do things the right way in the transition.

Another sixth-round pick for the Ravens, Clark came out of Virginia Tech with a similar feel to Bozeman, beside their respective draft slots. Good player from a big program who didn’t really have a lot of expectations on him from the start.

He got on to the field for 15 games his rookie year and amassed 13 tackles, per Pro Football Reference. The next year, he played all 16 games and got two starts, notching a pick and 21 tackles. Year three saw Clark start 12 out of 16 games, grab another interception, tally a sack and two forced fumbles, to go with 73 tackles. Last year, after a much-reported scuffle with the now-departed Earl Thomas, Clark started all 16 games, wore the green dot as defensive play-caller, totaled 96 tackles, an interception, two forced fumbles, a fumble recovery for a touchdown and 1.5 sacks.

The coaching staff and other defensive players continue to rave about Clark’s intelligence and professionalism, and he’s become a significant figure on one of the best defenses in the league. It was widely reported this week that Clark actually watched film of the rookie minicamp this week by himself to get his own impressions of the young talent added to the roster.

Clark has not become a Pro Bowl performer to this point, but he is a good player who is usually in the right spot and appears to be trusted by his coaches and teammates. Want to know how to have a long career in the NFL? Like this. Either run a 4.2 40 and be 250 pounds, or do the right thing and build a circle of trust.

Edwards was an undrafted rookie who split his collegiate career between Rutgers and Miami (FL) and flashed a bit that preseason with power-fueled juggernaut runs up the gut. Once Jackson became the starting quarterback about halfway through the 2018 season, the offense dramatically changed, Edwards entered the spotlight as that punishing between-the-tackle option for Jackson in the zone-read game that exploited and confused defenses from the jump.

“Gus the Bus” had the first of three consecutive 700-plus yard seasons for the Ravens to start off his career, and he has seemingly gotten a little quicker each year in the league. He has gone from breaking through arm tackles to niftily avoiding some, while generating several long runs through explosiveness.

Edwards has shared the limelight of a historic rushing offense with Jackson, Alex Collins, Mark Ingram and JK Dobbins, and continues to keep his head down and perform every time he’s been called upon to do so.

Edwards has proven himself to be a good NFL power back, and if that career keeps him in Baltimore, or takes him to new locales down the road, Edwards has made a name for himself in the league by being dependable and showing continuous improvement in his craft.

Three blueprints to success in the NFL just waiting to be emulated.