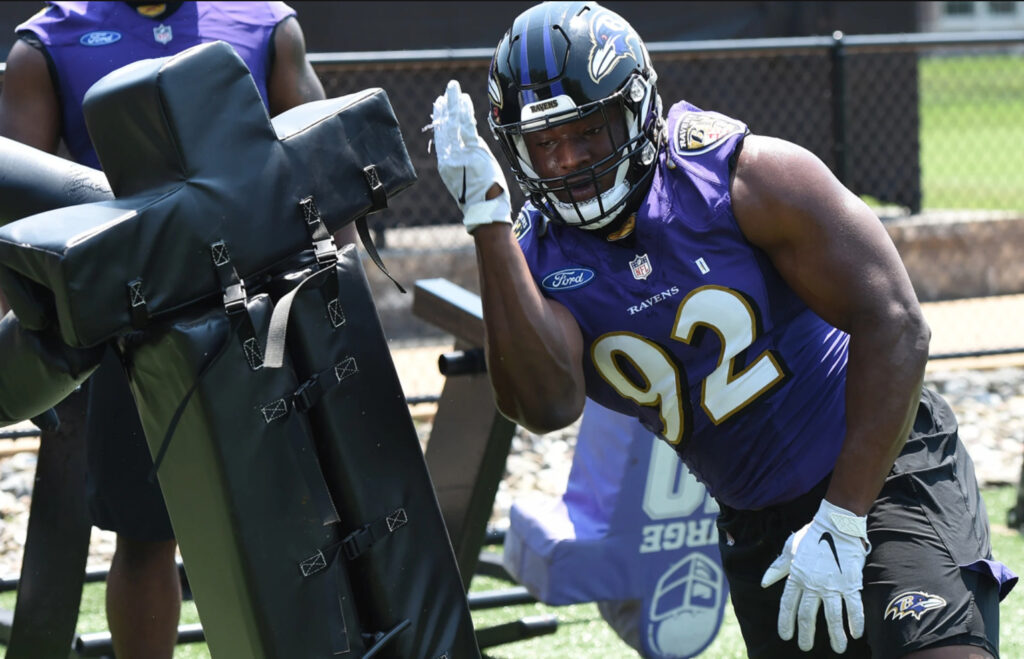 The Ravens defense held the upper hand throughout most of practice today, one that was spirited and included a brief moment of fisticuffs between Justin Madubuike and Patrick Mekari. The ruckus was terminated quickly by a few intervening teammates but that didn’t prevent Madubuike from jumping up over those mates to try and land a haymaker on the helmetless Mekari. He missed.

• Lamar Jackson missed regularly today but he certainly wasn’t helped out by a few receivers named Watkins, Boykin, Proche and Wolf. One of Lamar’s best throws on the day was an intermediate crosser. Lamar led Sammy Watkins beautifully and had he caught it, he probably runs to pay dirt. Unfortunately, he didn’t. Boykin dropped probably Lamar’s second best throw on the day, a dart on a slant from left to right that also had plenty of YAC potential.

• Overall, Lamar struggled on his throws today, many looking like wounded ducks. The Eastern Shore’s Waterfowl hunters would have been proud. Such balls are more challenging for receivers. It’s difficult for receivers to make hand snags to tuck away and then pick up additional real estate post-catch.

• The defense brought pressure from different angles to keep the offense off balance. Nifty footwork from Lamar and Tyler Huntley helped to extend plays but the secondary, despite the absences of nearly all starters, was tight, limiting throwing windows.

• For a few plays, the offense reversed the momentum with some effective red zone play. Huntley hit Devin Duvernay in the back of the end zone from 5 yards out and on the next play hit Rashod Bateman for a score in nearly the identical spot where Duv had success on the play before. Trace McSorley then stepped in and connected with Miles Boykin on a left corner fade; next it was Lamar’s turn.

• On his first red zone play LJ hit Deon Cain for a score making that four consecutive red zone plays, four scores. But on the next play from scrimmage, Lamar was picked off in the end zone by S Jordan Richards.

• The biggest gain from scrimmage occurred during the 2-minute-offense drills when McSorley connected with Cain down the left sideline for about a 50-yard gain down to the 10. It capped a productive day for Cain who at least for today was the better former Clemson Tiger wide receiver.

• Josh Oliver had a few catches. He moves well and is someone to keep an eye on because the eyeball test during practices in shorts and shirts leads an observer to believe that he can make some vertical plays.

• James Proche practiced well but did drop a nicely designed bubble screen; the most reliable pass catchers on the day were Duvernay, Cain, Bateman and Jaylon Moore. I was really impressed by Bateman’s sure-handedness and footwork along the sidelines during two-minute drills.

OTHER OBSERVATIONS (in no particular order)

Madubuike looks stronger, in better shape and more flexible than a year ago. Looking forward to see how that translates to his ability to rush the passer even better in 2021…Tyus Bowser’s ability to drop into coverage continues to improve. Today wasn’t a good barometer of improvement in the pass rush. Not saying it isn’t there. It’s something I’ll monitor but nothing today stood out…Odafe Oweh had at least one sack. T Foster Sarell had no answer for his speed on one particular sack…Patrick Queen looks a bit thicker but with no decline in his quickness. He appeared more comfortable in coverage and nearly had a pick six intended for a tight end, I believe, Eric Tomlinson…Jaylon Ferguson looks trimmer and had a couple of pressures…Broderick Washington may have had a wakeup call with his destruction of property incident in Virginia. He looks to be in better shape and looked sharp in individual drills. Hopefully he’ll be destroying more important things this coming season.

Bradley Bozeman was effortless and flawless during shotgun snaps to the QB, not a given for the team in 2020…Tyre Philips’ conditioning has improved and he moved better at both the left tackle and right tackle spots…Alejandro Villanueva practiced at right tackle and while it’s a new position, he seemed smooth and effortless. He’s a behemoth and makes even Mark Andrews seem average-sized…Brandon Stephens had a solid afternoon, mostly at safety, while sticking to his assignments. That said he didn’t seem to be targeted much at all during my observations…Marquise Brown didn’t take as many reps as the rest of his WR corps members. Could be precautionary. 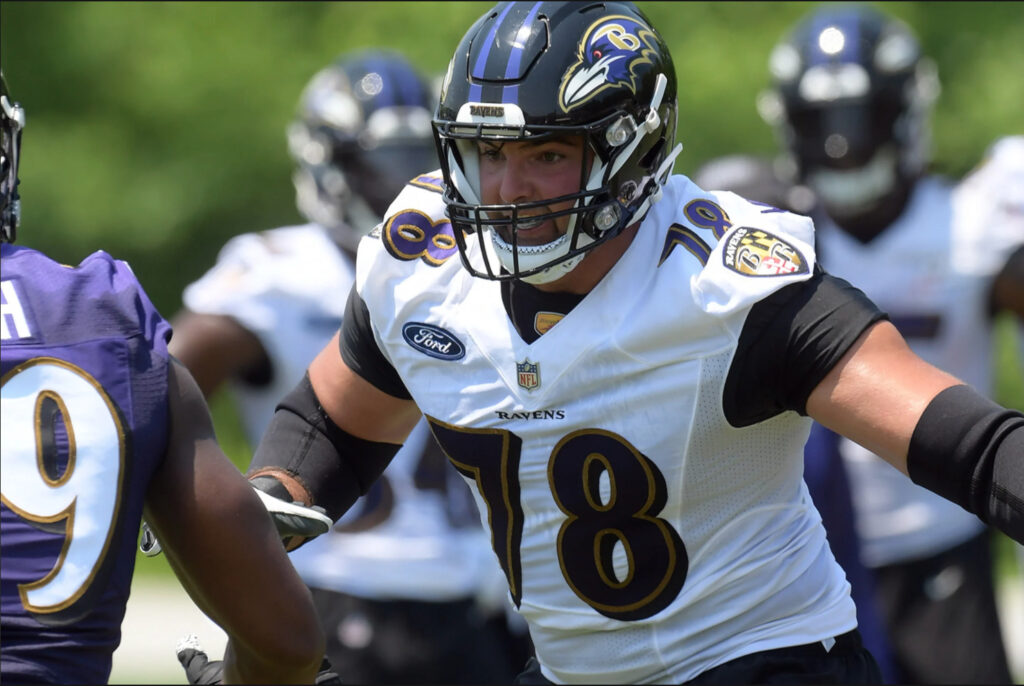 I noticed Justin Tucker tossing the ball around and doing his best Odell Beckham, Jr. impersonation with one-handed grabs off to the side. He throws the ball decently too. Could you imagine Tuck throwing for a score at The Bank? Tuck was flawless in FGA save for one 50-yarder when he lost his footing…Running backs were limited as most of today’s action focused on the passing game – at least during live scrimmaging and 7-on-7’s.