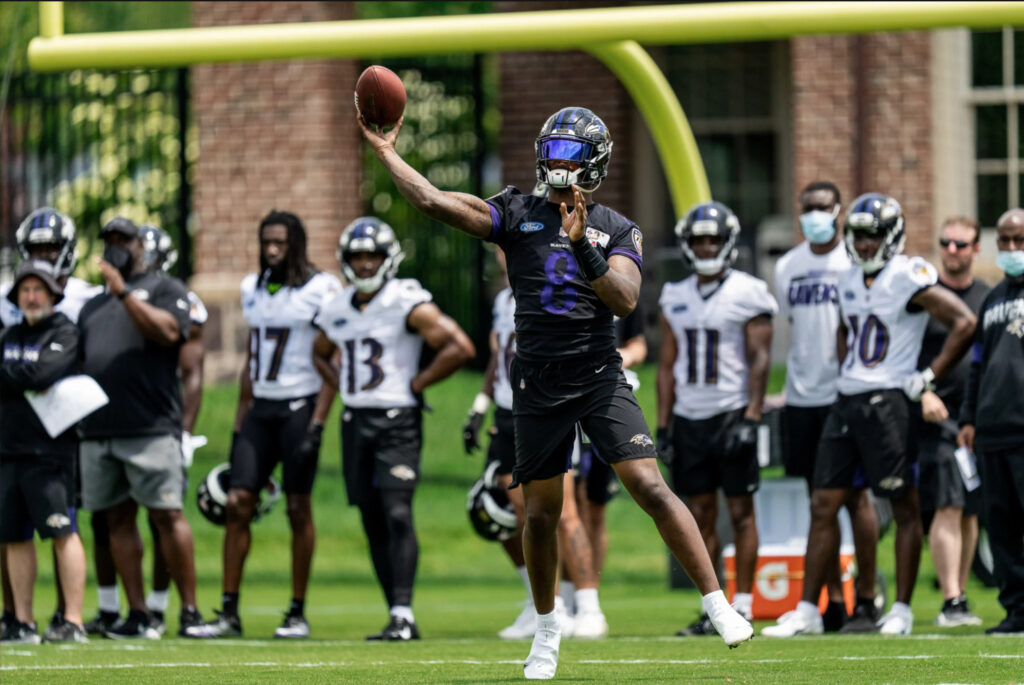 The Ravens began their second phase of voluntary workouts this week with a full slate of players.

Quarterback Lamar Jackson, running back J.K. Dobbins and wide receiver Marquise Brown were among 70 playmakers attending the practices. The NFLPA told players not to attend voluntary offseason workouts, citing coronavirus concerns, but most of the Ravens decided to attend.

“I just think it’s a lot of guys that love the game of football, and honestly, they just want to be here to get better and perfect their craft and make the most of their career, honestly,” safety Chuck Clark said.

“I just go out there every day, trying to be a leader,” Watkins said. “I think if I can be a leader and try to help the guys and help myself and learn from them, and we all learn from our coaches and just really take it seriously as far as getting open.

“This offense has been top in the league at running the ball, and if we can correlate both running and passing into the offense, I think this offensive team can be dangerous. But really, just going out there and every day just trying to work and put it together. I think that’s the most critical thing – taking coaching and trying to get better.”

Ravens coach John Harbaugh was encouraged by the participation.

The Ravens other voluntary camps are June 7-8 and June 10-11. The team then has a mandatory minicamp from June 15-17.

“It’s a voluntary camp,” Harbaugh said. “I can’t speculate on different guys’ thinking. The guys that aren’t here, I really wouldn’t expect to be here – veteran guys, especially ‘D-linemen.’ Those guys, there’s not that much for them to do at this camp. So, I understand it if they’re not here. The fact that the guys are here, that’s great. There really was not much conversation.

“One thing we have talked a lot about is the vaccination stuff. Not in terms of trying to influence anybody, but in terms of understanding what will be required if you’re vaccinated or not vaccinated. Those were kind of the biggest conversations we’ve had along those lines.”

Linebacker Tyus Bowser thought it was important to be at the voluntary workouts. He wanted to set an example for several of the rookies, especially fellow outside linebackers Odafe Oweh and Daelin Hayes.

“It’s voluntary – that tells you right there that it’s an option to whether you can go or not. But I just know me coming into a new role as a veteran, I just wanted to be here for these guys, to be here for these young cats – Odafe, Daelin, even [Aaron Adeoye] ‘Double A’ – all those guys who are working to try to keep a spot,” Bower said. “I just want to be here for these guys and be that presence for them to go out there and have a [veteran], have a guy who’s played games, that’s been around other great players to help lead them and teach them coming into this year what you’ve got to do to make the team, or to up your game, or to improve, or whatever.

“[For] me, I just use this year as a development for me to continue to get better. There’s no better opportunity than coming out here and working hard and working on your game. And then not only that, but just being here for these young guys to help lead them. So, that’s why I’m pretty much here.”