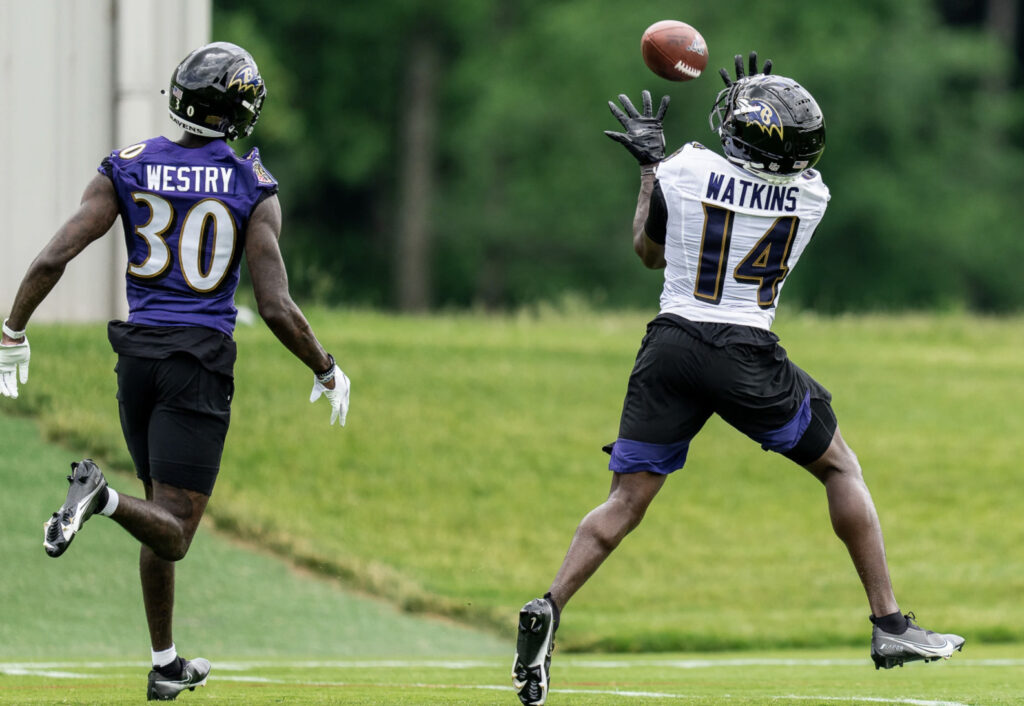 The Ravens have a lot riding on Sammy Watkins.

The veteran wide receiver is expected to be a focal point of the offense.

Watkins missed the first week of voluntary workouts but was present the second week. He had an uneven performance, running solid routes, but dropping a couple of passes.

There’s no reason to worry about his pass-catching skills.

Watkins is a proven, sure-handed wide receiver that will come up with big plays once the lights go on.

The biggest question is whether he can stay healthy.

“His reputation precedes him arriving here,” Ravens quarterbacks coach James Urban said. “He’s a terrific player who’s played at a very high level in this league for a long time. Were it not for some unfortunate injuries, I think his numbers would be way up there. So, any time you can involve a player like that and introduce him to what we’re trying to do with our passing game, I think it’s a blessing. Right now, we’re in the working phase, getting to know Sammy [and] Sammy is getting to know us and our offense. We’ll see how it progresses from there, but we’re working hard at it.”

First practice as a Raven ✅

Watkins has caught 321 passes for 4,665 yards with 33 touchdowns over 86 career games, He’ll turn 28 on June 14 so he has plenty of solid football ahead of him. Watkins has the speed to get behind secondaries and does an effective job gaining yards after a reception.

However, Watkins missed 10 of 48 games over three seasons with the Chiefs. He has only played one full 16-game season during his career, his rookie year for the Buffalo Bills. Watkins did appear in 15 games for the Rams in 2017 before signing with Kansas City.

“I talked to coach and his staff; I’m a guy that goes 100% [and] a guy that really doesn’t know better,” Watkins said about staying healthy. “I told them that they have to protect me, know when to [not] let me kill my legs and make sure I’m getting good work, but also knowing when to pull back. I think that’s very critical with having a coach that understands that.

“I think that’s why I was successful at the Rams and played [15] games, because I had a good coach who kind of knew when to pull back, when to have those not necessarily rest days, but not doing 100 plays at practice. I was able to go into the game and be successful and feel really good about myself. [When] you feel good, you play good.”

Watkins is looking forward to being reunited with Greg Roman and recapturing some of the success they enjoyed in Buffalo, He had the best season of his career in 2015 with the Bills when he finished with 1,047 receiving yards and nine touchdowns. Roman was the first-year offensive coordinator that season.

“Greg can put you in a lot of different places, and honestly, I’m learning from the young guys right now,” Watkins said. “They’re kind of helping me, putting me in certain spots, and I’m learning certain routes from them, so hats off to those guys.

“But just really going out there and being able to play fast, and go out there, really, to show my talent. I think that’s the most critical thing – to learn the offense to where I can play fast, block and do all the things I can do on the field.”