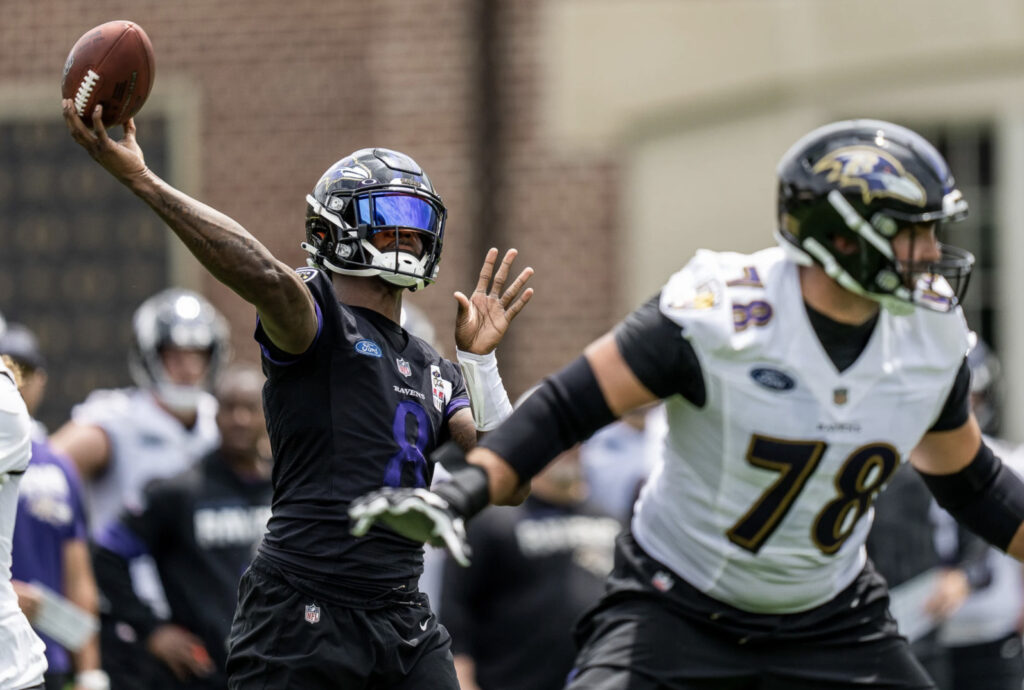 Lamar Jackson had a mostly solid performance during the final voluntary workouts.

However, he did miss a couple of deep throws, but that’s to be expected this early in the offseason.

Jackson will need to progress entering his fourth training camp with the Ravens. He’ll have to show more accuracy throwing outside the numbers and with his throws deep downfield.

The Ravens’ Super Bowl hopes could hinge on his performance.

Jackson has gone an impressive 30-7 as the starter in the regular season. He has thrown for 7,085 yards with 68 touchdowns and 18 interceptions over three years.

He is also the only quarterback in NFL history to run for over 1,000 yards in two seasons and has 2,906 yards rushing and 19 scores overall.

The Ravens provided Jackson with more support this offseason.

The Ravens boosted the offensive line by signing Kevin Zeitler and Alejandro Villanueva as free agents. The team selected Ben Cleveland in the third round of this year’s draft.

Perhaps the most impactful decision was moving Bradley Bozeman from left guard to center, a position he played at Alabama.

“I’ve always had a close relationship with all my quarterbacks,” Bozeman said. “It’s very important to have that open line of communication, for him to be able to come to me and say, ‘Your snap was off high left.’ And I can come to him and say, ‘Your hand placement needs to be more to your right, you need to be more firm.’ It’s huge to be able to communicate those things. Him and I are responsible for making things right. He’s got the receivers and I’ve got the o-line.”

Jackson and the Ravens will begin more intense negotiations for a contract extension that could cost the team $40 million annually. Jackson doesn’t appear bothered by the uncertainty of an impending deal but stated his desire to remain in Baltimore.

Urban does not think the contract situation will be a distraction.

“We have an unbelievable front office,” Urban said. “I know that they have plans. They’re in great hands, and they’ll handle all that business side. We’re just trying to get better and continue growing and improving every aspect of our game and his game. So, that’s all we’re doing. I don’t worry about that. I don’t think he worries about it. He seems to be the same old guy that he is all the time. So, I don’t really have many concerns there.”