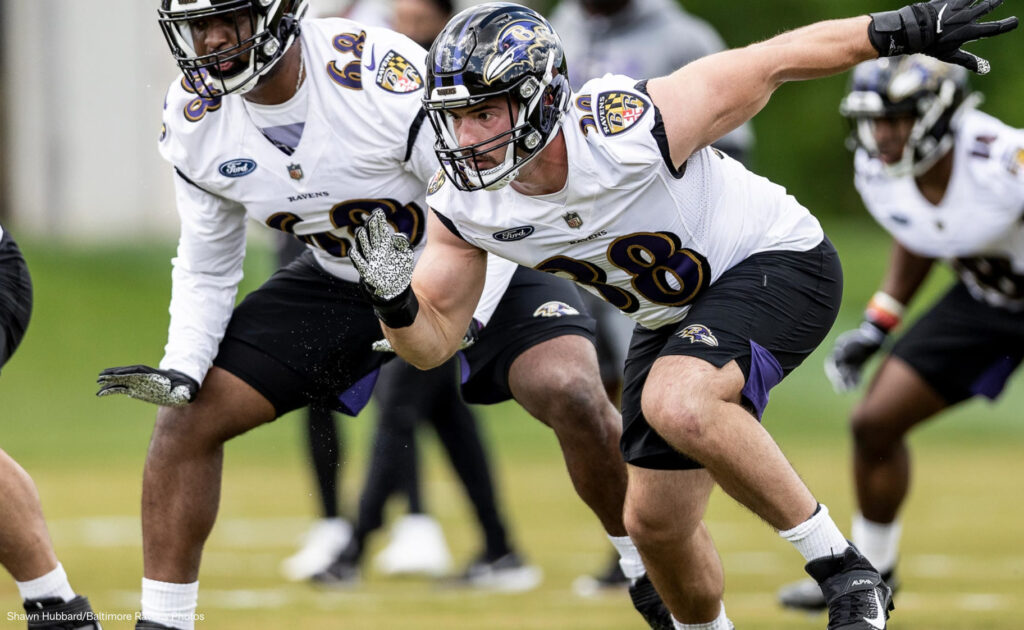 When the Ravens turned in the card for Ben Mason with the 184th overall pick, the selection, on the surface, seemed puzzling at the time. Most analysts expected Mason to be a 7th round pick or possibly even go undrafted. Yet the Ravens made him a fifth round pick.

The Ravens already have Patrick Ricard under contract through the 2021 season and he’s proven to be a force as a versatile component of Greg Roman’s rushing attack. The Ravens list Mason as a tight end but one look at the player and it’s obvious that fullback is his only consideration in the NFL.

John Harbaugh loves Mason’s attitude. He loves Michigan players. John’s Dad loves THIS player and to get him, the Ravens had to use their last pick in the 2021 draft to lay claim to him. Had Mason gone undrafted as some expected, he might not consider the Ravens due to the presence of Ricard, a two-time Pro Bowl FB.

During OTA’s we haven’t really had a chance to see the attraction to Mason. His skill set is suited to fully-padded practices and games. It’s tough to display his talents during practices featuring shorts and jerseys. The only thing on display has been a pair of hands that so far resemble charcuterie boards.

[The Curious Visit by Todd Gurley]

It is possible that the Ravens see Mason as the eventual replacement for Ricard who will be an unrestricted free agent in 2022. We’ve seen the value of a bruising FB in the Ravens brand of offense. It is also possible, but highly unlikely, that the Ravens would part ways with Ricard this season and hand the job to Mason while saving $2M in cap space.

So, it begs the question, “Will Mason stick around?”

The Ravens aren’t known to part with a 5th-round pick so quickly but is the luxury of a backup fullback worth a spot on the 53-man roster? Let’s not forget the other highly-contested positional battles that will be fierce, particularly in the secondary, across the offensive front and of course at WR where it’s possible that the team retains 7 receivers.

And then there’s the battle for backup QB. The bet here is that the Ravens would be more inclined to keep 3 QBs than 2 FBs.

Ben Mason might be the future but he’s not the present.

I fully expect the former Wolverine to be attacked by a kamikaze cicada and land on injured reserve.