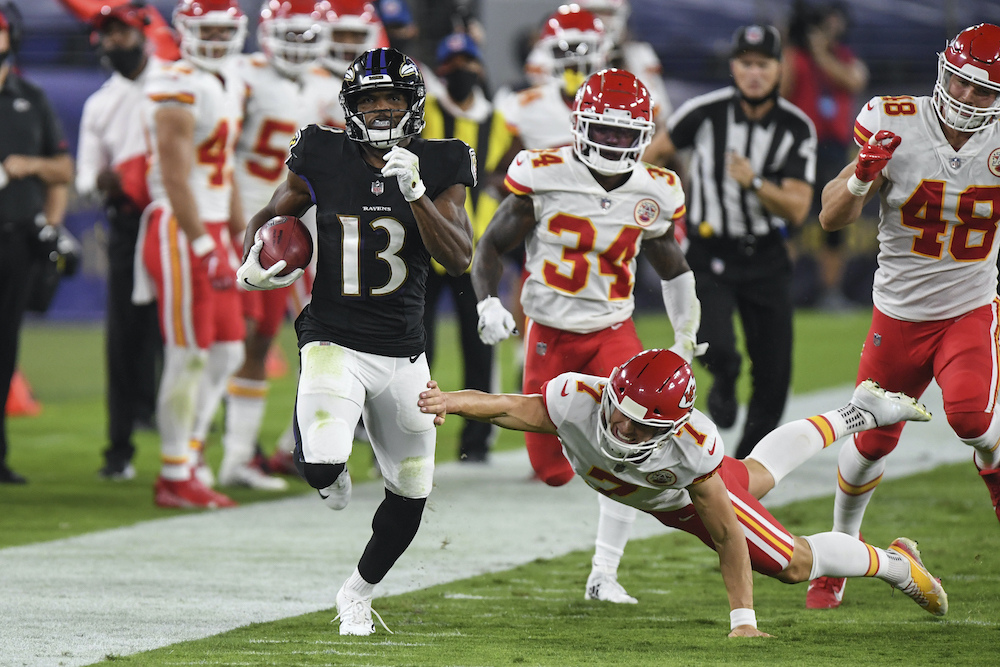 Patrick Queen and JK Dobbins received a lot of the attention of last year’s rookie class, but receiver Devin Duvernay turned some heads, as well — albeit in more limited opportunities.

The stocky, fleet-footed Duvernay made an immediate and very-real impact on kickoff returns, eliciting memories of Jacoby Jones’ impact with his 27.5 yards per return (fifth in the NFL, per Pro Football Reference), including a memorable 93-yard return for a touchdown in an otherwise unmemorable primetime clash with the Chiefs. He also seemingly wrestled away punt-return duties from classmate James Proche by the end of the season, posting a very respectable 11.5 yards an attempt.

Duvernay finished 10th in the NFL in total return yards last season, placing him in the top third of the league, and generating excitement from the Ravens faithful every time he settled under a kick.

That’s a solid return for a third-round pick.

Still, his arrival did stir some optimism from the Flock that he would make a significant contribution to the offense — particularly in regards to an all-too-often stagnant passing game. However, while Duvernay did generate some splash plays, including a 39-yard catch and a 42-yard end-around, the production was fairly modest — 20 receptions for 201 yards, and 70 yards on four rushes. There’s nothing wrong with those numbers for a rookie on a playoff team, but it’s hard to argue that Duvernay did anything to really elevate the Ravens offense in 2020.

With Willie Snead vacating his slot position, many expected Duvernay to slide in this year and really take hold of the opportunity. But the Ravens added Sammy Watkins, Rashod Bateman and Tylan Wallace to the equation, presumably moving Marquise Brown to the inside in many packages, thus nullifying the chance for Duvernay to take the next step in his evolution as an NFL receiver.

But there is still a path for Duvernay to contribute to the 2021 Ravens, in addition to his valuable role as a returner.

Duvernay’s obvious strengths are his reliable hands, electric speed and physical strength that enables him to convert speed into power, pedaling through arm tackles like cooked spaghetti without losing velocity. There are ways the Ravens can take advantage of these plus-skills, and add new dimensions to the offense.

The Ravens love to run a ton of pre-snap motion and misdirection, forcing defenders to declare their intentions early, and often causing linebackers to lean one direction or another before the ball is snapped. That is one of the factors that helps with the zone-read game, as quarterback Lamar Jackson can get a “key” quickly when determining to hand it off or use his own skills as a runner.

Moving Duvernay in and out of the offense from down to down gives the Ravens a dangerous weapon to move into motion, allowing him to either accept a crossing handoff from Jackson, shade a defender along with his motion or recognize early a matchup with a linebacker, creating a mismatch before the ball is snapped that should be easily spotted and exploited.

There are so many athletic linebackers in this league who can cover now, but very few would be able to travel a seam with a streaking Duvernay who is entering the snap as a moving force.
Those seam throws play right into Duvernay’s strengths — as well as Jackson’s proven ability to throw between he numbers. Getting the ball to a vertically-moving Duvernay just seems like a good idea.

Those end-arounds, even one or two a game, would also get the ball in a dangerous player’s hands, and would, in theory, cause hesitation for opposing safeties and linebackers from snap to snap. With the speed the Ravens present with their playmakers (a foreign concept for the franchise until recent years), any hesitation can become a chunk play.

Barring injuries, it’s hard to see a path for Duvernay to catch 100 balls this season or produce 1,000 yards receiving. But if used correctly, he can make a splash.

And splashes can win playoff games for you.