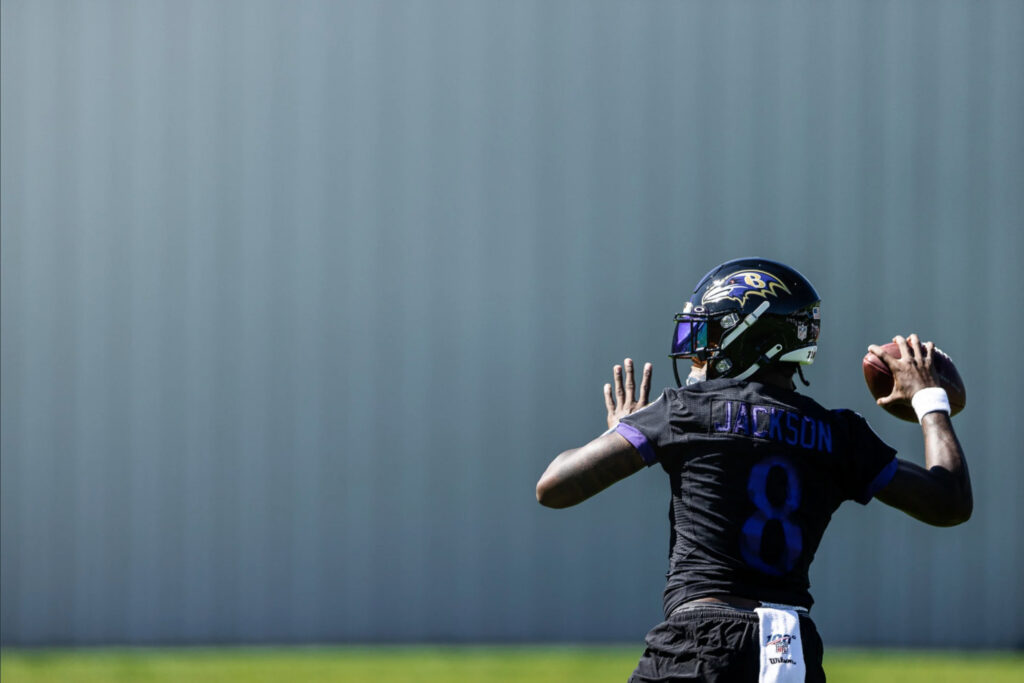 As RSR’s Adam Bonaccorsi eloquently explained in his Camp Notes from yesterday, OTA’s (minicamp included) are essentially passing camps. The defense can flat out ignore the run and focus solely on defending the pass which certainly gives a competitive advantage to the defense, particularly considering the proficiencies of the Ravens rushing attack. So, against a swarming defense that shows a variety of looks, Lamar Jackson & Co. often have their work cut out for them. In a way it reminds me of the way Dean Smith used to coach the North Carolina Tar Heels. The idea was to make practice such a challenge that relatively speaking, a real game might seem like a walk in the park.

Reports on yesterday’s practice were not good for the offense. On the day, four interceptions were recorded. Today’s quarterback play was much better, particularly from No. 8. He consistently got the ball out quickly, on target and with good velocity. A few of his shining moments this morning included:

• A 65-yard scoring strike to Sammy Watkins on the very first play of 11-on-11 scrimmaging. Watkins beat Marlon Humphrey. The pass was a thing of beauty.
• On the very next play Lamar hit Mark Andrews on a seam route up the left hash, another chunk play, giving the big tight end an opportunity to add YAC.
• A second 65-yard strike to Watkins down the right sideline splitting a bracket formed by Marcus Peters and Jimmy Smith.
• The fifth throw from Lamar in 7-on-7 drills was a missile to a streaking Watkins on a slant which could have arguably gone for another score.
• Lamar and Watkins connect again near the numbers along the left for a 25 gain on a well-placed back shoulder throw.
• Later in 7-on-7 Lamar hit a streaking J.K. Dobbins who leaked out of the backfield and got behind a badly beaten Chuck Clark.
• A nice touch pass to Andrews in the red zone, placing the ball where only the tight end could make a play on the ball.
• Another touch pass to Binjimen Victor in the right corner of the end zone during red zone drills ended in a score as Victor toe-tapped the back of the end zone.

Lamar’s only blemish on the day was a desperation pass to Marquise Brown who drew double coverage from Humphrey and Elliott. It looked like one of those chuck-it-up plays where the INT is on par with a punt. But in this case given the double coverage and the smaller Brown as the target, a healthy return would have likely resulted. It was Humphrey with the pick.

As for the reserve QB’s Trace McSorley and Tyler Huntley, both played decently but I’d give a very slight edge today to Huntley. McSorley had a couple of nice long tosses to Jaylon Moore and Victor. But in 7-on-7’s he missed a wide open deep ball to Deon Cain who had beaten Humphrey. Huntley connected on a deep throw to Victor down the left sideline, splitting Anthony Averett and Gino Stone for a 35+ yard completion. Later he hit Miles Boykin who made a terrific diving catch to finish a near 40-yard gain. He also hooked up with Moore on a back shoulder throw for a nice pickup of 20+ yards.

This is certainly not an official statistic but my success rates for the QB’s on the day from the 11-on-11 and 7-on-7 drills were as follows:

I spent some time watching Rob Ryan put his linebackers through the paces during positional drills. He had them simulate their positions on the field and then had them take on and shed imaginary blockers courtesy of the machine seen below.

There’s been talk, much of it from Patrick Queen himself, about his conditioning in 2020 compared to 2021. In this drill directed by Rob Ryan, Queen shows off his added strength, something that will be key to his ability to shed oncoming blockers during the coming season. pic.twitter.com/aXyJl4NJl9

Of the inside backers, those that were most consistently explosive were L.J. Fort, Malik Harrison, UDFA Barrington Wade and Otaro Alaka. Ryan later used what looked like a big forklift tire in tackling drills. Again, players assumed their position on the field and at the snap they first had to fight off an initial block, avoid a cut block simulated by another coach pushing a large-weighted ball into their shins and then finish by tackling the tire that was rolled across the field by another coach. It was an interesting way to polish and refine tackling without the use of teammates…during 11-on-11’s Patrick Queen just missed a pick-6, a half step late on a short pass to Oliver, broken up by the second-year backer.

The Ravens seemed to move players around on offense, regardless of where they are on the depth chart. In other words, you might see Lamar throwing to someone like Victor who a week ago, wasn’t someone thought could make the team. It gives players an opportunity to see what they can do with a first-string unit.

The offensive unit was sloppy throughout, pre-snap. There were several false starts and a few delay of game penalties called. During a stretch where the team practiced a “must-have” fourth down to win or lose the game, both sides of the ball were amped up. Twice the offense had false starts forcing a more challenging 4th-and-10 conversion attempt…After one such false start Lamar hit Tylan Wallace on an out route but the rookie receiver ran out of bounds a couple yards short of the sticks. Also, during this particular drill, Gus Edwards leaked out of the backfield to haul in a short pass from Lamar with plenty of room to run. Daelin Hayes was chastised for blowing the assignment leading to the 4th down conversion. It was a blemish on an otherwise productive day for the rookie Golden Domer.

J.K. Dobbins is spending a substantive amount of time refining his craft as a receiver with very good results. I like that he is a hands-catcher and not one that allows the ball to get into his body. He showed some of that in training camp back in 2020 but got away from it, resulting in drops during games. Look for a more polished receiver out of the backfield this coming season…Mark Andrews looks like he’s in midseason form. He looks a tad leaner and quicker in and out of his breaks…McSorley had a nice string of throws in a condensed 7-on-7 red zone session. He took three consecutive reps that resulted in TD’s, one to WR Devin Gray, another he drilled between the hashes to Moore. The third was a diving catch by Boykin in the back right corner of the end zone. Boykin made some nice plays but he did have a drop on a pass from Lamar on a short crosser. The ball caromed off Boykin’s hands and was nearly intercepted. Others with drops on the day included Brown, Cain and tight ends Josh Oliver and Eli Wolf.

Tyre Phillips looks smoother than last season. He capably warded off the likes of Hayes and Bowser while assuming the left tackle position…Andre Smith practiced and played LT. He recovered from a sluggish start but was clearly not as smooth as Phillips with his backpedal. His conditioning is suspect and his legs don’t appear to be all that powerful…Snaps from both Bradley Bozeman and Trystan Colon were flawless.

Defensively, the players who caught my eye the most include Hayes, Justin Madubuike, Odafe Oweh and Chauncey Rivers. Hayes is just an all-out, whistle-to-whistle baller. He’s relentless. Madubuike is athletic, quick off the snap and is in better shape than a year ago. I expect good things from him this coming season as a sneaky interior rusher. Oweh has such great bend around the corner and was in the backfield a few times today. The players quit when they get too close to the quarterbacks or just run by them to avoid contact. In a live game Oweh would have had a couple sacks today. Rivers is in better shape and looked solid during individual drills…Pernell McPhee had a sack with a power inside rush from a pre-snap position on the outside…Overall the secondary played tight forcing QB’s to tuck and run several times, particularly towards the end of practice.

Justin Tucker connected on all FGA’s. During one stretch he connected consecutively from 32, 37, 44 and 51 yards out. The 51-yard boot had at least 10 yards to spare, after which Tucker could be heard screaming, “YEAH!” – probably a reaction to his unusually off performance from the day before. Reserve kicker Jake Verity was good from 33 and 41 but missed badly from 42, wide left from the left hash…Sam Koch regularly placed punts inside the 10, giving gunners an opportunity to catch-and-down the ball. Reserve P Johnny Townsend wasn’t nearly as successful, oftentimes landing the ball between the 15-20 yard line. Koch just makes it look so easy…snaps from LS Nick Moore were on point throughout the session.

Rashod Bateman didn’t practice today due to a stomach virus. He was sent back to the team’s hotel. Jaylon Ferguson was excused from practice to deal with a personal matter.

The practice was wrought with enthusiasm and friendly competition, probably inspired by the realization that today’s practice would put a bow on the 2021 OTA’s. Next up, training camp which if previous seasons are any indication, will begin on or about July 29. That’s six weeks to convalesce and mentally prepare to embrace the grind.