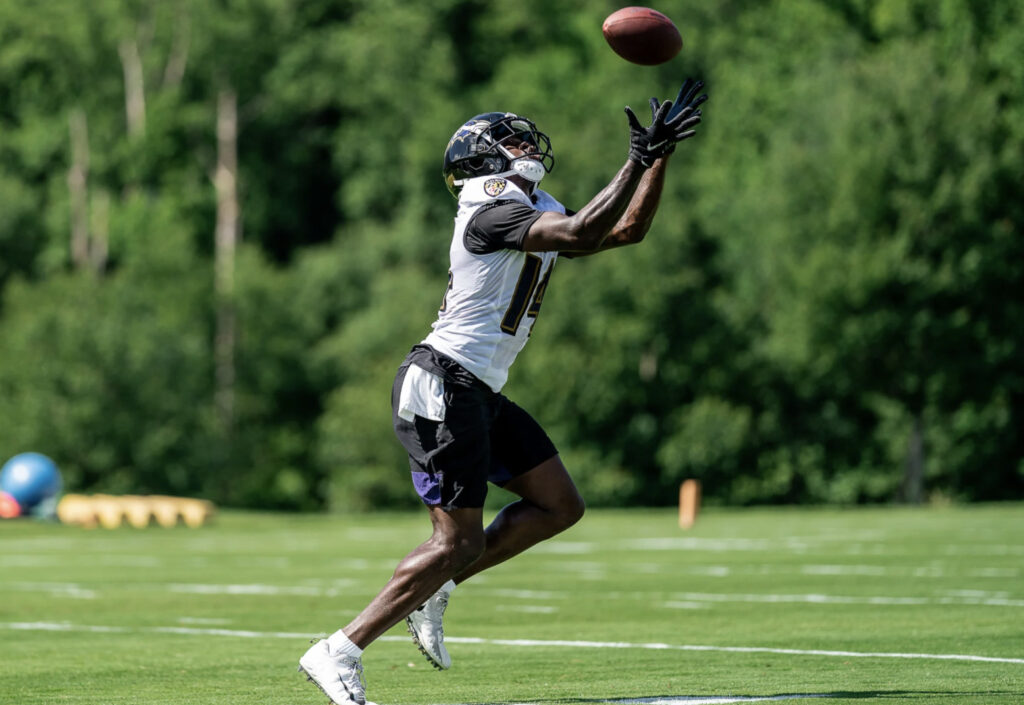 Sammy Watkins got behind the secondary and caught a long touchdown pass from Lamar Jackson at the Ravens mandatory minicamp.

Later in the practice, Watkins made a leaping grab in the end zone from Jackson.

It’s only June, but Watkins is showing the potential to be a big-time playmaker for the Ravens this season.

He just needs to stay healthy.

“He looks good. He’s big and he’s fast,” Baltimore coach John Harbaugh said. “He has good hands and he’s a veteran guy. The thing I’ve noticed about him is he really is a student of the game. He really wants to improve his game. He’s very much a stickler for the fundamentals and for pushing himself on the fundamentals; in and out of routes, angles, eyes, hands [and] hand placement. All that stuff has just been something that he works at.”

Watkins missed 10 of 48 games over three seasons with the Kansas City Chiefs. He has managed a full 16-game season once during his career, his rookie year for the Buffalo Bills. However, Watkins did appear in 15 games for the Rams in 2017 before signing with Kansas City.

When he’s on the field, Watkins is productive.

Watkins has caught 321 passes for 4,665 yards with 33 touchdowns over 86 career games. He’ll turn 28 on June 14 so he has plenty of solid football ahead of him. Watkins has the speed to get behind secondaries and does an effective job gaining yards after a reception.

He finished with 37 receptions on 55 targets for 421 yards and two touchdowns over 10 games in 2020. Watkins also helped the Chiefs reach the Super Bowl in each of the past two seasons. He plans to use that experience for the Ravens, who have Super Bowl aspirations of their own this season.

He is already leaving a solid impression with his new coaches and players.

“He asks a lot of questions of his coaches,” Harbaugh said. “He always wants to know what he can do better. When you see that in a guy … He’s only 27 [or] 28 years old. I’m very hopeful that there’s a lot of maybe his best football is still in front of him going forward. He’s young enough for that to be the case.”

Watkins had the best season of his career in 2015 with the Bills when he finished with 1,047 receiving yards and nine touchdowns. Roman was the first-year offensive coordinator that season and Watkins is hoping to recapture some of that magic.

“Greg can put you in a lot of different places, and honestly, I’m learning from the young guys right now,” Watkins said. “They’re kind of helping me, putting me in certain spots, and I’m learning certain routes from them, so hats off to those guys.

“But just really going out there and being able to play fast, and go out there, really, to show my talent. I think that’s the most critical thing – to learn the offense to where I can play fast, block and do all the things I can do on the field.”