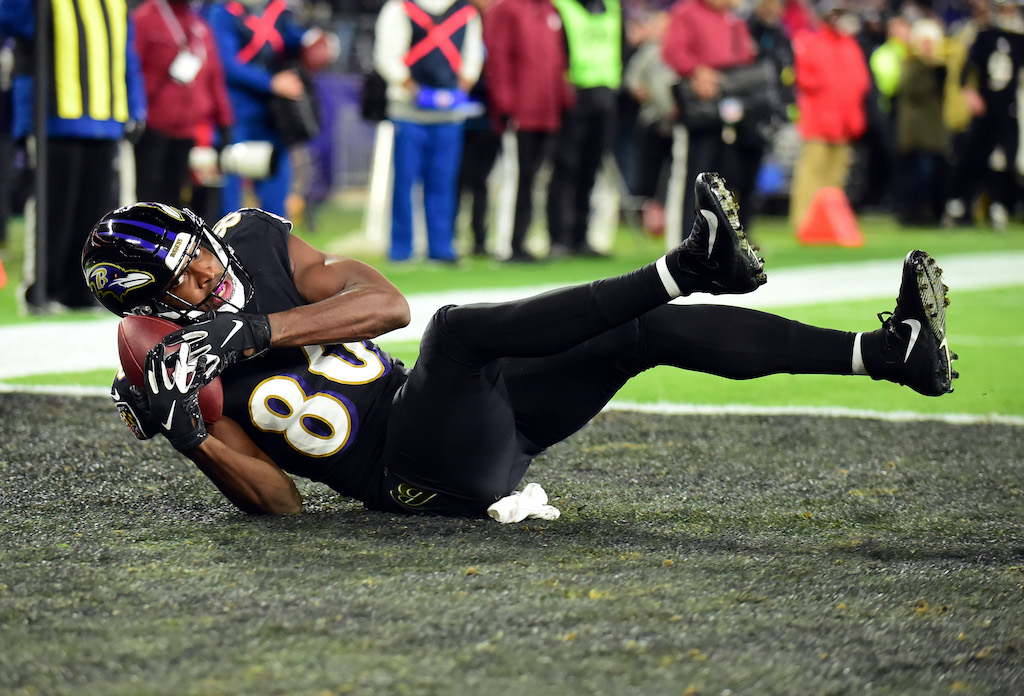 Last week I opined on Ravens wide receiver James Proche and why I believe he’s a better choice than Miles Boykin for the 6th and potentially final wide receiver spot on the 53-man roster. You can explore the merit of my argument for Proche here: [The Case For James Proche].

Those who prefer Boykin are quick to point out his potential to make contested catches; how he can develop into a red zone target and of course, his reputation as a skillful blocker.

During his two seasons with the Ravens, Boykin has a catch rate of 58.2%. He has only 32 receptions in 32 games during which he took 1,251 snaps. In 2020 his catch rate was 57.6%, which ranked 174th out of 202 receivers according to Pro Football Reference. So, while Boykin may be tall (6’4″) and he possesses an exceptional catch radius coupled with superior leaping ability, the skill set hasn’t translated to the field of play on Sundays.

In Boykin’s defense, as a red zone target, he’s been pretty good. Seven of his 32 grabs (21.9%) have gone for scores. Granted, it’s a small sample size but to put that percentage in perspective, the leading scorer amongst wide receivers in 2020, Davante Adams, had 18 touchdowns against 115 grabs (15.7%). Perhaps there’s underutilized value there.

To his credit, he plays to the whistle and he helps to keep longer runs alive with his willingness and effort as a downfield blocker. But here’s where the support for Boykin begins to unravel.

If things go as planned, the top three receivers to take the field will be, in no particular order, Marquise Brown, Sammy Watkins and Rashod Bateman. In a four-receiver set, given the complementary skills of the aforementioned receivers, a player who can get open between the numbers and underneath the secondary, much like Willie Snead did for three seasons in Baltimore, is ideal. Coordinators want that guy who can move the chains and extend drives. Proche is built for such a role.

But even if you dismiss this type of role in a 4-wide set, is Greg Roman really going to sub-in Boykin just to provide a key block? Wouldn’t such a substitution dictate tendencies? Can’t one of the main three receivers block effectively enough to support the run game?

Actually, Watkins is perfectly suited to bring such skills as evidenced by the video below.

Whether it’s blocking until the whistle, or catching the ball down the field, Sammy Watkins is going to be a fun receiver for Lamar Jackson.

Can’t wait for the tempo to be raised and the season to start. #RavensFlock pic.twitter.com/OI6ktfJLF7

So, to put a bow on the 6th-WR talk, if in your heart of hearts, you believe that blocking skills are going to save Boykin in a six-horse race, Sammy Watkins might have something to say about that. His skills as a blocker could very well elevate Proche’s chances to make the final 53.