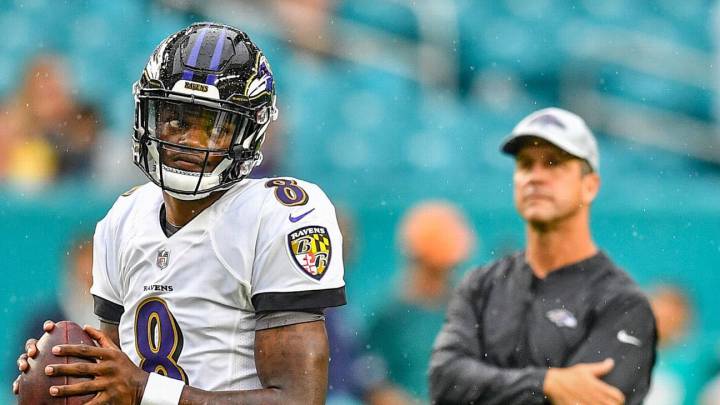 Expectations Have Crashed Hard in the Postseason

With an all-time record of 225-174-1, a playoff mark of 16-11 and two Super Bowl titles in 25 seasons, the fans in the purple and black have been doing more boasting than moaning since the team first took root in the city for the 1996 season. And since John Harbaugh took control of the team in 2008, the Ravens have gone 129-79, with an 11-8 playoff mark. So, yeah, things have gone pretty well in Charm City over the years, thank you very much.

Really, things don’t look to be slowing down any time soon — not with the franchise’s first MVP, 24-year-old quarterback Lamar Jackson, still taking snaps. Jackson has begun his career with a 30-7 mark as a starter, two division championships, three playoff appearances and a slew of NFL records in his portfolio.

While Ravens fans have been enjoying “The Golden Years” of the franchise in terms of regular-season dominance and offensive highlight plays, there has been a missing component. A pretty important one. Probably THE important one. Playoff success.

For all the dominance and excitement of the Harbaugh/Jackson era, they have stumbled to a 1-3 mark in the playoffs, and their sole victory — last year’s Wild Card round defeat of the Titans — was not earned through the same offensive efficiency they have consistently displayed in the regular season. The playoffs are different. The opponents are better. Teams are more willing to change everything they fundamentally do in a win-or-go-home scenario than they are in a typical regular season game. All of these things are true.

But they are also true for the opposition. And they have often managed to look better than the Ravens when the stakes are the highest.

So, what’s the expectation for this season? Is it win the franchise’s third Super Bowl title or 2021 was a bust? Is it advance to the AFC Championship game, as I’ve heard and read many opine? Is it just a matter of getting to the playoffs again? Are we simply looking for growth and, if so, how long is growth really acceptable for a team that is seemingly stacked with talent?

Look, if the injury bug doesn’t rise up a la that disastrous 2015 campaign, the Ravens should make it the playoffs, and should compete for a division championship. To me, those are the two goals every competent team should hold going into the season, and the Ravens have the players and coaching staff to come armed with that expectation.

In short, we need to see the regular-season Ravens show up at the playoff table. Look the Kansas City Chiefs are awesome. The Cleveland Browns are loaded. The Buffalo Bills are really, really good. There is no shame in losing to any of these teams in the playoffs, and I wouldn’t consider the 2021 Ravens to be a failure if they came up short to them.

But they need to show up in the postseason. They need to cut down on turnovers. They need to catch the balls that hit them in the hands. They have to communicate on the offensive line. And they need to have a plan that gives them a chance against other very good teams. The defense had mostly done their part in these games, and it’s hard to put this playoff malaise on them.

That’s the expectation, right? No pooping the playoff bed. Ravens fans want to see this team win or go down swinging with their best effort. There’s nobility in that. There’s honor in that. Another lackadaisical postseason effort, however, could see significant changes in this organization.

Ravens fans have expectations. And they should.