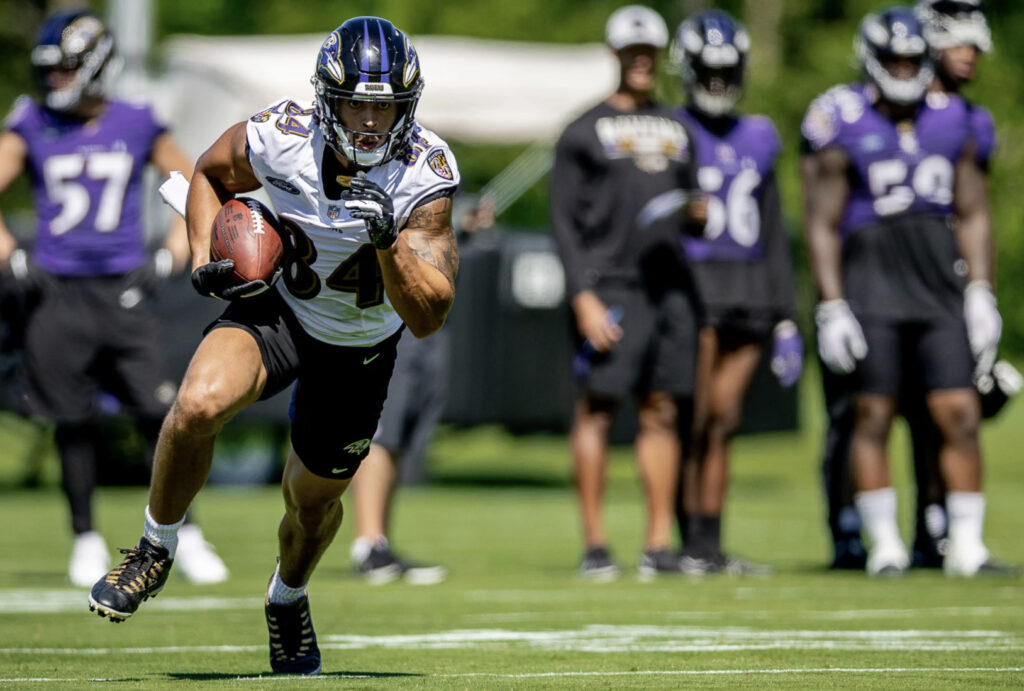 Every offseason, training camp stars show up out of nowhere to steal the spotlight. Every team has them. For the Baltimore Ravens, the list has been long in its own right, with wide receivers being the headliners for years. However, ironically, this offseason the Baltimore front office made every effort to erase that particular list of hopefuls. Instead, they’re banking more on established commodities and high-profile prospects — signing veteran Sammy Watkins, and spending first- and fourth-round draft picks (Rashod Bateman and Tylan Wallace) to revamp the WR room.

No, this year’s incoming training camp “hopeful” may very well be at the tight end position. His name is Josh Oliver. And he might just be the latest in a long line of tight ends who come out of nowhere to turn into a legit playmaker in the NFL.

The early reviews on Oliver, a former third-round pick of the Jacksonville Jaguars from San Jose State, from offseason OTAs and minicamp have been nothing short of glowing. The big, wide-framed pass catcher has looked the part of a 6’5”, 250-pound target with untapped ball skills.

Our own Tony Lombardi talked about how Oliver impressed on a few grabs during a camp session in early June, displaying potential vertical route running ability. Jonas Shaffer from the Baltimore Sun named Oliver as one of his “risers” in camp and the “most consistent receiver of the tight ends battling for a roster spot.”

Before we go too far forward on Oliver’s buzz and tantalizing upside, let’s take a step back to reality. The initial reports are observations of Oliver without the pads on. And Oliver has a checkered injury history, which is why he was available in the first place.

The former Jaguar only played in four games over the first two seasons of his career. Coming out of training camp with Jacksonville in his rookie year, Oliver suffered a significant grade 2 hamstring injury and had to miss the first six games of the season. After the hamstring, Oliver dealt with a tailbone fracture which ultimately ended his rookie season altogether. To start the 2020 year, he broke a bone in his foot, landing him on IR. Although Oliver was apparently healthy enough to play by the end of the 2020 season, the Jags had already placed him on the IR list well before the 53-man roster cutdown, thus making him ineligible to return.

At the time Oliver went down, the Jaguars coaching staff (which has since been transformed with a new regime headed by head coach Urban Meyer), seemed high on him heading into 2020.

According to then Jaguars tight end coach Ron Middleston:

“[He’s] tried to do things the right way. [He] comes to work, doesn’t say a lot. [He’s] not flamboyant or anything like that. [He’s] just a great a spirit. The kid has a great spirit. He has a lot of talent and I feel so bad for him that he hasn’t been able to showcase that talent. The few practices that we had before he got hurt this year, you really saw some things. If you go and look at some of the tape, some of the things he was doing. I was so excited for the kid. I’m just as disappointed.”

The Ravens did not seem fazed by his lack of durability when they pulled the trigger on a trade to send a conditional 2022 seventh-round pick to Jacksonville to bring Oliver into the fold. If Oliver makes the team, Baltimore is on the hook for a seventh. But giving up a conditional seventh for a player with Oliver’s athletic profile is quite honestly a no-brainer.

As Middelston alluded to, talent has never been the issue with Oliver. Coming out of San Jose State in the 2019 NFL draft, he was regarded as one of the more skilled pure pass catchers of that draft class. Owner of a 4.6 40-yard dash time, he’s actually a converted rush end/linebacker who switched to tight end when the need arose during his freshman year. As a wide receiver in high school, Oliver also had the skills and instincts to slide in at TE.

There isn’t exactly a ton of big school college footage out there of Oliver. However, from what I’ve seen, Oliver has some natural, basketball-like qualities when he gets open on his routes and attacks the ball. He has a feel for positioning his body in front of defenders. He uses his wide frame to block them out and can extend over smaller defenders pretty easily to swallow the ball like a vacuum. In that respect, Oliver is open even when he isn’t. He also displays uncanny agility and body control for a big man, working the sidelines, and maintaining his balance in tight spaces.

As a former receiver, he has the route-running recognition and footwork to excel as a slot-type target, and that’s also how he was used in the San Jose State offense. However, Oliver was featured prominently in their offense all over the field and wore several hats. He’s more than just a jump-ball target. He can run a wide variety of routes, has expansive route tree exposure, and can win in the deep intermediate area to stress safeties at the second level.

In the words of Matt Miller (from his Bleacher Report scouting report on Oliver):

“Ran a big route tree at San Jose State, and his past as a receiver shows with his knowledge of timing, space and body positioning…finds the ball with ease and brings tools to be a good 50-50 and jump-ball receiver. Could provide major value in the red zone as a second tight end.”

When I see Oliver, he reminds me — at least physically — of former Denver Bronco Julius Thomas. Both players are 6’5”. Thomas weighed in about 10 pounds heavier. Both have the wider upper body frame that is a little more atypical of those basketball-type TEs who tend to be long but leaner. In that regard, Oliver and Thomas are built more like power forwards than small forwards. They offer a large catch radius and air traffic control ability for quarterbacks to trust.

When you peel back the onion even more on this comparison, there are even more similarities (which are quite eerie). Thomas also had injuries that derailed his first two seasons in Denver. Thomas was also drafted in the middle-round range (fourth round) and came from a small school background (Portland State).

In his third year, Thomas exploded as a second TE with newcomer Peyton Manning. Ravens fans, you’ll remember that game quite well. Yes, that would be the seven-TD onslaught from Manning in 2013, following Baltimore’s Super Bowl championship. Thomas finished that game with 110 yards and two touchdowns.

Unlike Oliver, Thomas actually is a former collegiate basketball player though. But Thomas followed a long line of former basketball players like Antonio Gates, Tony Gonzalez, and more recently Mo Alie-Cox (Indianapolis). While Oliver may not have played basketball in college, he did play in high school, and he certainly applies that basketball game to the gridiron.

Would it really be that farfetched to see a tight end like Oliver come out of nowhere and emerge, to fulfill his draft status, and ultimately, showcase his physical upside? Actually, not at all. Tight end is a position that routinely sees players ascend up the depth chart for one reason or another.

Gates is headed to the Hall of Fame but was a former undrafted free agent. Remember Darren Waller? The former Raven was a converted wide receiver, sixth-round pick, who toiled away after his life and career were basically on the line. We know the story well. Now he’s one of the top three TEs in the game.

Tight ends evolve to maximize their potential when they are featured in an offense that can exploit their talents. In the case of Oliver, that opportunity seems quite promising in Baltimore.

Oliver will have to find his place behind Andrews and Nick Boyle, the best blocking tight end in the league. Those two are established. However, Roman will ultimately use some type of a rotation, and he’s been looking for a third tight end since the team traded Hayden Hurst before the 2020 draft. Regardless of Andrews’ and Boyle’s standing in the offense, both players have had their share of injuries. Andrews has also thrived in more of a slot role where his snaps are managed so he can avoid the nagging injuries that have at times slowed him down.

If Oliver can make the team, he’ll have to earn his keep as a blocker though. And that is ultimately the key area of his game that is unrefined and largely undetermined. However, when asked about Oliver during a question-and-answer session with season ticket holders, Roman had this to say:

“He’s very athletic, but he’s got some real strength to him as well. If you can’t block a defensive end or a linebacker, you’re a fake tight end. I think he’s got the chance to be a real tight end. If that could happen, it would really be a great addition for us.”

How Oliver embraces blocking duties will determine his future. The reality is, despite all of the promise Oliver presents, he’s been nothing but a disappointment to this point in his career. In respect to winning a job on the Ravens’ final 53-man roster, it’s going to be an uphill battle. Not only because he isn’t nearly the same blocker as veteran Eric Tomlinson, but because Oliver isn’t the special teams ace that 2021 fifth-round pick Ben Mason is, either.

These are the knocks on Oliver that could keep him from winning a coveted third tight end job. Frankly, we don’t even know if the Ravens favor a third TE over a second fullback or seventh wide receiver.

What Oliver does offer in spades is plenty of raw athletic skills and a real presence as a pass catcher. He may just be too talented to keep off the final 53. If he can stick on the team, Oliver has the chance to add real value to an offense in need of a second dynamic pass catcher behind Andrews.