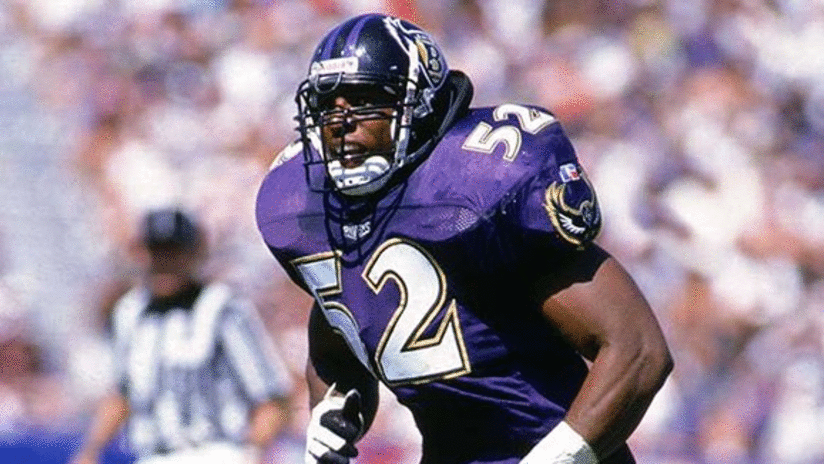 Before we talk throwback uniforms, let’s first get into the latest noise from One Winning Drive. Yesterday we learned via the NFL’s transaction wire that the Ravens have placed the big rookie guard Ben Cleveland on the active non-football injury list. For those of you wondering, “What injury?”, this list is used in part, to stash players who failed their conditioning test. Tight end Jake Breeland, a rare participant in OTA’s since his arrival in the Spring of 2020, also landed on the list.

We’ve seen this before prior to previous training camps. Key players like Haloti Ngata and Lardarius Webb have also flunked the test. Typically, such players get it together and pass the test within a few days. For Cleveland, a player who should be in the mix for the left guard nod, it’s a setback, albeit minor, for now. Incidentally, these players do count against the team’s 90-man roster.

Steelers reported to training camp today. Here is a lean, mean Ben Roethlisberger showing up for his 18th NFL season.

Lean? Seriously? Maybe Schefter has the inside “skinny” on Roethlisberger and he’s moving to guard to replace the retired David DeCastro?

Many of you have wondered if the Ravens will ever use their throwback uniforms from 1996 when Ray Lewis was a rookie and Vinny Testaverde sat at the controls of the team’s offense. Time will tell. But another team with a Baltimore connection will don throwbacks this season. Yesterday the Indianapolis Colts tweeted out the following:

A nod to the past. Built for now.

I’m sure many of you are unaffected by this tweet – one which by the way, was pinned by the Colts. Don’t count me among you!

The Baltimore Colts were my team as a youngster. Later in college during their final years in Baltimore, I worked as an intern with the team. Despite that, generally speaking, I’m over Bob Irsay’s move in the middle of the night to Indianapolis, taking with him a huge chunk of our city’s heritage. But let’s face it, the Colts have now been in Indy longer than they were in Baltimore and of course the team that now calls Charm City home, is a better one. So, there’s that to buffer the loss.

But when you see Indianapolis featuring our parents’ and grandparents’ Colts heroes from B’more, it grinds my gears. Players like John Unitas, Raymond Berry and Lenny Moore all detached themselves from Indianapolis after the move, wanting nothing to do with Irsay’s empire. Yet they are the stars of Indy’s hype machine.

You know, I thought for some time that Jim Irsay was different than his Dad. I used to see him at the old Colts complex throwing weights around with the players. Now, I’m not so sure that the apple falls far from the tree.

On The Dotted Line

The Ravens have signed their 2021 third-round picks Cleveland and Brandon Stephens, so now the entire draft class is under contract. You might wonder why it took so long to reel in the pair since such picks for the most part, are slotted. But generally speaking, there is some contractual wiggle room unique to 3rd-rounders that agents seek to leverage in the best interests of their clients. And that slows down the process a bit.

As RSR’s capologist Brian McFarland explained to me, “It’s really just how the slotting system evolved. The CBA doesn’t really create a slotting system. It creates a minimum and maximum that picks can receive. Over the first couple of years, it evolved so that 1st and 2nd round picks got the maximum while 4th-7th round picks received a bonus, then minimum salaries throughout the deal. Third round picks, since they weren’t getting any guaranteed salary were given the chance to have higher than minimum base salaries in years two through four.”

And therein lies the rub against time.

Both players should be solid additions to the Ravens roster but of the two, look for Cleveland to play a bigger role in 2021. He has a solid base, good bend and moves pretty well in space, particularly for his size. And coming from an SEC school, he’s faced superior competition. Stephens is more developmental but I can tell you that despite playing RB for UCLA his freshman and sophomore years and then DB at SMU for his final two collegiate seasons, he seems pretty sure of himself as a member of the Ravens secondary. At least he did during OTAs. Stephens could be the next man up should DeShon Elliott seek greener pastures following the 2021 season.

One of the camp battles that should prove to be intriguing is that for Lamar Jackson’s understudy. Given the fierce competition at several positional battles, trimming the roster to 53 will force John Harbaugh and Eric DeCosta to burn the midnight oil as they wrestle with challenging decisions. And given the lack of experience and the respective projections of Trace McSorley and Tyler Huntley, keeping both is a luxury the team can unlikely afford.

McSorley, pound for pound, is among the team’s grittiest competitors. He possesses some dual-threat traits, has RPO experience and throws a very catchable ball when he can sit in a clean pocket. That said, his size limits his vision and he will be a victim of batted down passes. He could be a backup in the league for a while and reminds me a bit of Colt McCoy.

Huntley has a superior arm and is faster than McSorley. He has the ability to strike downfield and his plus raw skills can’t be coached, but his deficiencies can be with repetitions and familiarity in the offense. I’d compare him to Tyrod Taylor, a guy who could give you a few wins off the bench in the event of injury and keep a team in the hunt as the starter heals.

It’s possible that the Ravens could move one of the two to the practice squad. While the PS rules have yet to be officially determined, it is believed that the league will keep in place or perhaps even expand upon the rules adopted for the pandemic, especially since they’ve implemented a 17-game schedule.

But there’s certainly danger in cutting a player and hoping that he clears waivers, particularly at quarterback. The league trend towards dual-threat players at the position – descriptions for which both McSorley and Huntley qualify, makes such a move even riskier. That said, the ultimate determining factor may be the way each plays during the preseason. Both will get plenty of snaps for other teams’ personnel departments to evaluate. Plus performances from both could trigger a personnel conundrum.

This video is COMPLETELY off topic other than the fact that the person featured in this video is a huge Ravens fan (he’s also my nephew). But who among us isn’t up for a little levity? This 63-second video certainly brings it. Mike Caddick, the star and creative director, put this video together within 24 hours, including writing the song, editing the vid, etc. He’s aiming to land a dream job for many – National Director of Taco Relations for McCormick Spice Company. What a cool title. Good luck Mike!

Enjoy your Thursday everyone!

Just 6 days until the official start of training camp!

My nephew @CADDlCK is trying to be the new Director of Taco Relations for @mccormickspices. McCormick seeks an enthusiastic lover of tacos asked interested applicants to submit a creative video (<2mins) to showcase personality and passion for tacos. Mike submitted the following. pic.twitter.com/k5dV4s6gWq