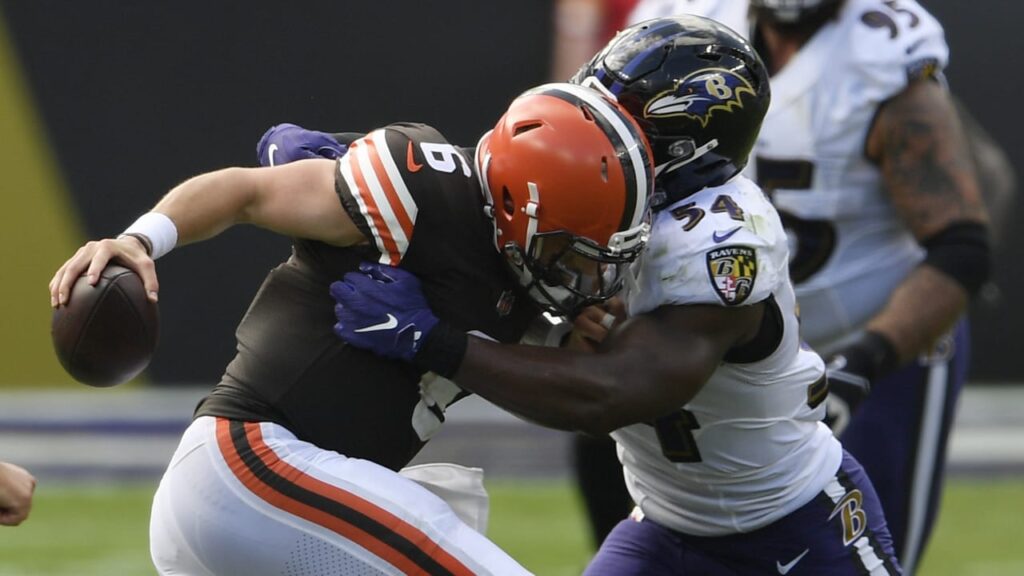 Whenever a discussion begins about the 2021 Baltimore Ravens defense the topic of sacks surfaces. Inevitably the first question is, “Where will the pass rush come from?” It’s a fair one.

In 2020 the Ravens ranked 14th in the NFL with 39 sacks, seventeen sacks off the league-leading pace of 56 set by their archrivals, the Pittsburgh Steelers. The Ravens also ranked 14th in sack percentage (5.99%). But do those stats really tell the whole story?

Let’s keep in mind that quarterbacks are now programmed to get the ball out quickly in order to avoid oncoming rushers and to give their receivers a better opportunity to add YAC. Let’s also keep in mind that the Ravens faced Ben Roethlisberger twice, during which he attempted 83 passes. Roethlisberger led the league with the quickest average release time of 2.3 seconds. That undermines the ability to produce sacks. By comparison Lamar Jackson’s release time was 2.98 (29th).

In 2020 the Ravens sack leader was Matthew Judon with 6, good for 41st in the league. Yannick Ngakoue contributed 3 sacks as a Raven, two off which came against his former employer the Jacksonville Jaguars during a 40-14 dismantling at The Bank. Both are now gone and fans wonder how the Ravens will replace those 9 sacks.

To address those respective losses the Ravens re-signed Tyus Bowser and drafted edge defenders Odafe Oweh and Daelin Hayes. They’ll also look to Jaylon Ferguson to step up his productivity. Bowser, Oweh and Hayes are all versatile defenders with plus athleticism, a prerequisite for Wink Martindale’s defense – one that schemes up pressure versus the reliance upon any one individual.

And there are other positive factors to consider. 2020 newcomers Derek Wolfe and Calais Campbell have now been in the system for a full season. Wolfe towards the end of the 2020 season and into the playoffs, grew markedly in his role. Justin Madubuike’s development was slowed by an injury and the lack of OTA’s. He’s expected to step up in 2021. 2020 rookies Patrick Queen and Malik Harrison are more prepared to handle their respective roles and look to make greater contributions in the coming season. The Ravens have added to their secondary via the draft while Tavon Young returns, allowing Marlon Humphrey to spend more time in his natural boundary position. Safeties Chuck Clark and DeShon Elliott have a season together under their belt.

Add it up and the Ravens defense could very well better their impressive 2020 campaign. And let’s be honest, Wink’s group wasn’t the reason why the team’s season stalled in Buffalo. While the questions about the pass rush are fair, maybe they are a bit overstated.

Sacks are great, but in a league where disrupting the quarterback is essential, 2020 proved that the Ravens did a pretty decent job of that.

And there’s reason to believe they’ll do the same in 2021.