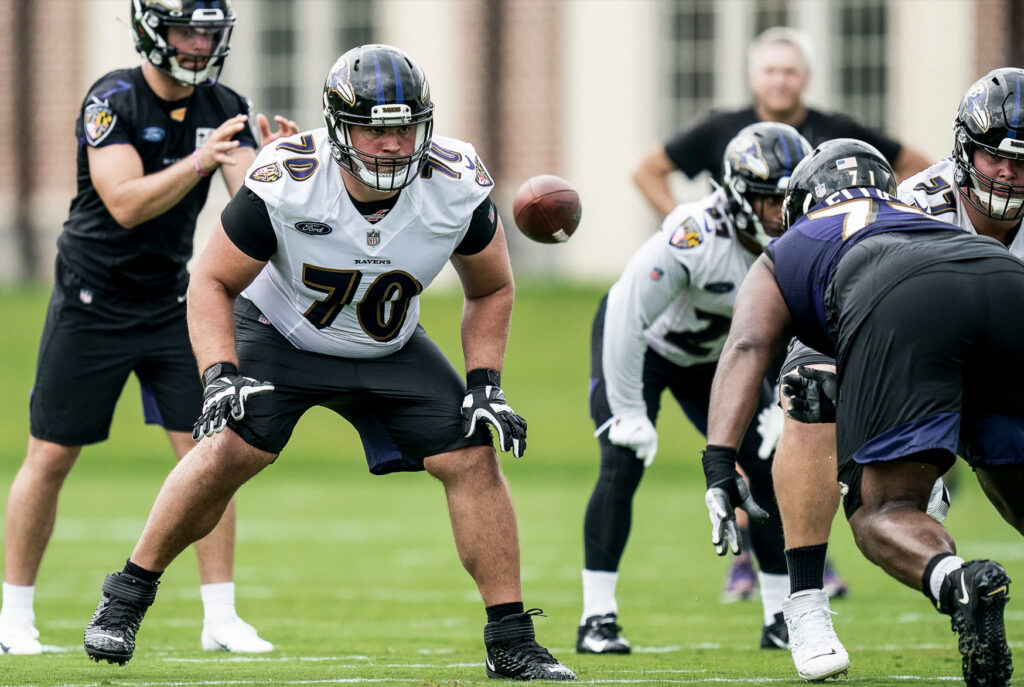 The first day of Ravens Training Camp is always an exciting one… until you remember the players are in shells so there’s no contact, Lamar Jackson is out with COVID Round 2, newly-extended Gus Edwards is also sidelined with the Ronas, Nick Boyle and Ronnie Stanley are still on the mend…

Oh, and it’s about 90 degrees with not even a light breeze to help beat the heat, and I’m trying to multitask, focusing on the field whilst strategically positioning myself on the sidelines in a manner in which sweat isn’t puddling on my shirt, creating the appearance of ink blots scattered throughout my torso for the fans in the stands behind us to do a self-psychological exam…

But hey! Football is back, baby

We’ll get to my highlights shortly, but my focus on the day revolved around the offensive line and trying to get a sense of how this thing will shake out come Week 1.

As noted earlier, Stanley is still on the mend, so when you see the likes of Andre Smith and Foster Sarrell taking snaps at left tackle, it certainly gives you a sense of alarm… but rest assured, my expectation is similar to 2020 when the right tackle (Orlando Brown Jr.) moved to left tackle (Stanley) upon injury, and the tackle depth provided was for the right tackle position. Likewise, Alejandro Villanueva, a life-long left tackle, would more than likely provide depth at LT behind Stanley, with a swing tackle (Patrick Mekari? Tyre Phillips?) providing depth at RT. With that said, there’s no reason to move Al to the left in camp when the Ravens need him to get acclimated to the right… thus the scrapheap currently occupying the blind side.

I must say, after watching Smith get beat like a drum with any and every inside move? Let’s hope that shift would be the case!

One more quick note on Al at right tackle since this is a new player for the Ravens, taking on a new position on the O-Line: when you see Villanueva in a huddle, he towers in the same way Calais Campbell does for the defense. But once that ball is snapped? You lose sight of his lid, and he gets low and shows a solid pad level in his pass sets. When you combine Al’s length and leverage, I can see why the Ravens think he can be a solid anchor at right tackle.

As for the interior OL grouping, it’ll be interesting to see how things shake out.

Pick a Ben – any Ben (except Mason) – and you’d probably see him lined up in a few different places, working with a few different line combinations, at different moments in practice. I genuinely don’t believe there’s a definitive, clear-cut pecking order for this interior group (sans Bradley Bozeman holding down center, followed by Tristan Colon) but we’ll likely see things unfold in the coming weeks. One additional Ben-worthy note: Ben Cleveland is a friggin’ tree trunk of a human-being that surely had his hands full going against guys like Campbell, while looking un-enthused by the efforts of some of the fringe-caliber players. On one particular snap, I watched Cleveland fend off a pass rusher with his right hand alone (with ease) while his left arm was searching for another victim throughout the entire pass set. The kid is a monster in training.

Stepping away from the Bens and shifting to the Brads…Bozeman’s snaps were somewhat of a concern today. He launched a few over the head of Trace McSorely, and kicked a few wide and high that McSorely was able to control, and those mis-snaps continued on as the O-Line unit broke off to the side for drills. At one juncture, I picked up on a staff member taking snaps from Bozeman and Colon, and framing the snap like a catcher in baseball, as the Centers would turn around post-snap to check their target. In these snaps, Bozeman still struggled with consistency, although to be clear, we’re talking airmailing one of ten, and putting another three or so wide or high of the staff/signal caller.

While it’s never great to see, let me remind you that in OTA’s, Justin Tucker went on a run of a handful of missed field goals in a small sample size, then quickly returned to form the next day. I expect in similar fashion, Boze will knock off the rust and get it going consistently.

But if not? Colon is going to keep knocking on that door…

— Marlon Humphrey knows how to ignite a crowd! When the defense came over to join the offense early in the day, Humphrey got loud and raucous, causing the fans to mimic the intensity. Without going *too* wild here, I’d say Hump is approaching Sizzle level of hype-man for this Ravens squad.

— I’m a known McSorley naysayer, but I’ll always give credit where credit is due, and he put on a solid showing today. He still airmailed a few passes, but was more consistent than I’m used to seeing, and threaded a few needles in the 15-25 yard range.

— I said it on the Twitters already, but I’ll echo the sentiment here: Tyler Huntley is the best deep ball thrower on this Ravens roster. LET ME BE CLEAR. To me, Huntley has great tempo on the deep ball, solid accuracy, a tight spiral, and big-time arm strength. Yes, Lamar Jackson has several of those factors playing into his favor. Yes, Lamar is the superior QB. But that doesn’t mean that in this particular skill-set, Huntley cannot be slightly better… which he is.

— Tyus Bowser took just two steps to easily maneuver around LT Smith, and I’m not even sure he made any contact in the rep. Bowser took an outside step, cut in, and used his inside hand to ensure separation, while Smith looked flat-footed and dazed.

— I raved about Ben Mason’s hands in OTAs… now he makes me look foolish with an easy drop on Day 1 of camp.

— Chris Board made his way to McSorley’s lap on back-to-back snaps for ‘sacks.’

— Chris Westry was sticky in coverage today, notably glued to Rashod Bateman down the sideline on one particular play. Bateman tried to rip the ball off the top of Westry’s dome, but couldn’t reel it in.

— Didn’t see much of anything special out of Odafe Oweh today, but it’s still early, and again… shells. Once the pads go on, I think we’ll see some more to get a better feel, but he consistently looks like he’s trying some pretty basic outside moves and coming up short.

— My rookie of the day goes to Bateman. Every cut is clean, every route is carefully planned and executed, and he doesn’t slow down. In one particular rep, he cut so hard his knee couldn’t have been more than a few inches off the ground while turning on a dime.

Play of the Day: THE FANS

Last year during camp, the Ravens cut off fan attendance and I have to say, the library-esque feel to the practice was just weird. It was different hearing players and coaches chatting for sure, but the return of fans truly made today feel like ‘normal’ once again. The cheers on completions, the groans on drops, the uproar on splashy plays and the occasional fan shouting their favorite player’s name brought back the essence of what makes training camp so much fun at The Castle.

I look forward to more of that fan excitement over the course of the next few weeks at One Winning Drive!