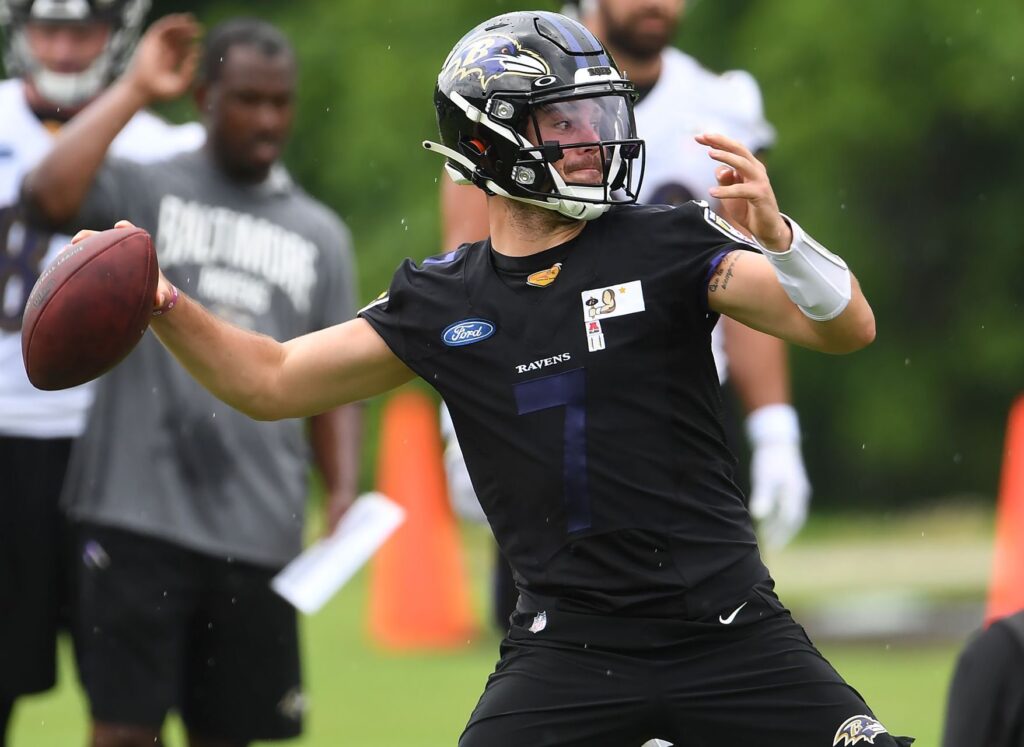 The big news today didn’t take place on the practice field. It took place off the field when word leaked out during the morning session that Lamar Jackson tested positive for COVID. In an offseason that has included extensive retooling of the offense to improve the Ravens’ passing game, the last thing that offensive coordinator Greg Roman needed was to have his star quarterback out for 10 days while convalescing on the COVID list. But the team took the shocking news in stride, particularly the offense, and had themselves a productive first day of camp.

Trace McSorley was the first to step in, in Lamar’s absence, and had a very good outing. He threw a nice pass to Josh Oliver running a seam route down the right hash. Oliver climbed the ladder well above the oncoming safety (I believe it was Nigel Warrior) to snag the contested catch. McSorley later dropped a dime to Marquise Brown down the right sideline for a score from 70 yards out. Shortly thereafter, McSorley had more change left in his pocket, dropping a second dime to J.K. Dobbins running a wheel route outside the numbers to the right. Dobbins’ skills as a receiver are impressive…Tyler Huntley hit Brown for a long score earlier during 11-on-11 scrimmaging. Brown torched Davontae Harris on a stop-and-go. When the ball finally landed, Marquise had about 7 yards of separation. Huntley’s slight-of-hand on delays was impressive. He sold the pass well to get defenders upfield only to use the aggression against them when the handoff was complete.

Rashod Bateman is a polished product for a rookie. He has great body control, cuts sharply, possess boundary awareness complemented by toe-tapping skills and he works his way back towards the football like a veteran. He snatches the ball out of the air with authority. That’s all good news for the team’s offense…Devin Duvernay caught passes all over the field. It looks like Roman is attempting to get Duvernay in space where he can run after the catch. His skillset in that area is impressive, consistent with the scouting reports coming out of Texas, that when he runs, he seemingly hates humanity. Duvernay hauled in a pass on the right sideline – a comeback route, and then juked by CB Shaun Wade, scampering in for the score…Of note, Andre Smith took reps at left tackle in Ronnie Stanley’s absence.

The offensive output was impressive albeit less than perfect. The offense was flagged a few times for some pre-snap movement; Miles Boykin dropped a perfectly thrown ball from McSorley that should have gone for a long TD. That dime was apparently not to Boykin’s liking; James Proche muffed a pass thrown to the short right; Bradley Bozeman had three errant snaps. One McSorley saved, the other two sailing over the 6-foot tall signal caller’s head; Ben Mason had another drop on a short swing pass.

The day was won by the offense but the defense had a few standout plays. Early in practice Chris Board executed a perfectly timed blitz that would have easily resulted in a sack; Marcus Peters had man coverage on Mark Andrews and blanketed the big tight end who was lined up wide right. Peters had a PD on the play and was a half-step away from a pick-6, thrown by McSorley; Tyus Bowser is working on his pass rush arsenal. He made a nice swim move to the inside of Smith to earn a clear path to the quarterback. This too would have produced a sack; a third sack on the day was registered by Daelin Hayes who badly beat UDFA tackle Foster Sarell.

The news that Nick Boyle had a clean-up procedure done to his recovering knee and that it would keep him sidelined for a bit, leaves open a window of opportunity for those competing for the third tight end position. When Boyle gets the green light to return, it would hurt Eric Tomlinson’s chances of sticking with the team. Until that time, Tomlinson is the tight end best equipped to handle Boyle’s rugged assignments in the running game. As for a pass receiving tight end, Oliver looks the part. Mason, while listed as a TE, hardly looks like anything but a fullback. Tony Poljan and Eli Wolf had decent outings but both struggled to gain separation today. Pro Bowler Andrews looks smoother than ever and seems to be built for speed these days. His conditioning is the best that it’s been since he arrived in Baltimore.