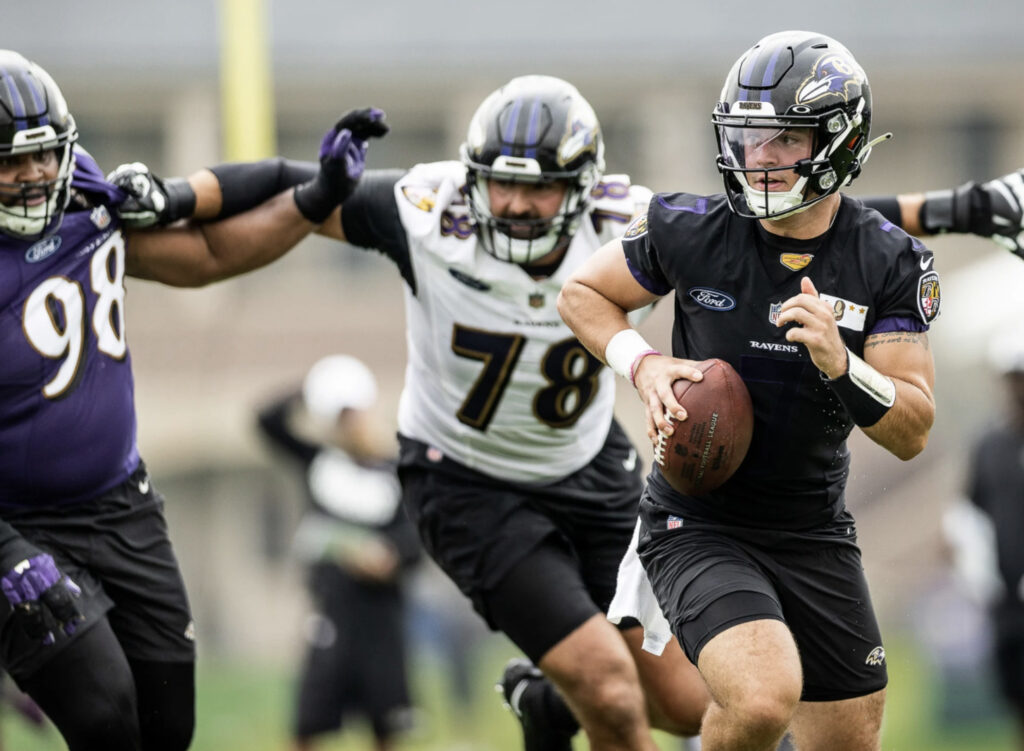 I’d like to start today’s discussion of the Ravens Training Camp focused on one word that really stuck out to me today.

Joined by fellow RSRer Darin McCann (his notes here), we took a few moments today to really pay attention on the emphasis the Ravens coaches place on technique refinement, attention to detail, and development of the players. It’s not just ‘run this drill’ and ‘run that drill,’ it’s a true commitment to detail and finding that next gear across the board for all of the players. It’s chatting in the ear of every player after every play with praise, or necessary critique, until it’s perfected. And the focus on commitment surely doesn’t stop there either.

The players are committed to winning every battle, whether their roster spot is secured or not. John Harbaugh is committed to being involved in Special Teams drills and directing his critiques to players specifically. Rob Ryan’s commitment to his long, flowing locks that we’ll never see hacked off. Keith Williams’ commitment to wearing full sweat suit even in 90-degree weather. JK Dobbins’ commitment to long sleeves under his jersey every day…

I kinda went off the rails there, but you get the drift. This team is committed to success, from the top to the bottom, and even in something as medial as training camp, you can see that commitment in everything they do.

On Wednesday I had my eyes glued to the Offensive Line and really trying to get a feel for a unit that has what seems like more new faces than old ones. Today, I opted to spend that individual drill time honed in on the wideouts. Unfortunately, there were no soccer balls involved in today’s camp, but still plenty of work on fighting through traffic that I like to see. One drill that caught my interest involved a wide receiver trying to focus on an incoming pass while two other wideouts are hand fighting and pulling on him. On the surface, it may not sound like a big deal, but when you think about how many concentration drops the Ravens have fallen victim to over the past few years?

I did catch a Rashod Bateman drop in the drill, but truly nothing to be alarmed by (and he more than made up for it later on in 11-on-11s), but the standout here for me was James Proche. Not only did the second year wideout catch every incoming pass, but one particular pass required him to climb the ladder with hands all over him and pulled the ball down with ease. As Proche touched back down to Earth with the ball secured, he simply looked down at his hands in amazement, as did the entire fan section that was cheering him on. Stacking days like this for Proche is only going to help him solidify that WR6 spot on this roster.

Two other standouts for me – although likely of the ‘outside-looking-in’ variety – were Binjimen Victor and Devin Gray. It’s not that either caught some exceptional acrobatic catch… it was all about their route running and their feet. Victor has to be one of the smoothest route runners out there, making cuts with ease and not wasting a single step throughout the route. Gray has a similar ability in routes, but the speed at which his feet move is absolutely fantastic. Again, I don’t expect either to make this roster, but I do expect that they’ll put up some big plays during the Ravens preseason games in the coming weeks that’ll have fans talking.

Of course, there’s more to camp than drills, and the wideout who stood out the most during the scrimmage portion of the day is a name we’ve heard every day this week.

Watkins is stacking great days early on, and reeling in catch after catch – including a perfect toe-tap touchdown on a fade – should have fans excited. I know Watkins wasn’t the splashy wideout that the Ravens fans wanted during free agency, but I think he fits this offense well, has the trust of the coaches, and will be a valuable asset to this offense opposite Bateman & Hollywood Brown.

While the wideouts had their share of success, the young defenders shone the brightest on Friday.

— UDFA Ar’Darius Washington made a few splashy plays, notably a hot pursuit on a toss out to Ty’Son Williams that resulted in a loss, and another where Washington was able to shoot his diminutive frame through the gap to pressure Tyler Huntley in what felt like less than a second to be on him… although Huntley was able to toss the ball to Williams for a completion. I’d like to say this would’ve been a strip/sack type play in a real game, but Washington’s height disadvantage (5’8″) to Huntley (6’1″) showed here. Kinda reminded me of my kids trying to tackle me…

— Justin Madubuike showed flashes of exactly what makes Calais Campbell smile that big smile of his: relentless pursuit. Mads fought his way into the backfield for a TFL early in the day, then in the final scrimmage he broke through the line, leapt up and swatted down a McSorley pass attempt. The ‘pop’ of Mads mitts hitting that pass had me flashing back to the days of Haloti Ngata… I know. Bold statement. I’ll own it too.

— Daelin Hayes showed some exceptional sideline-to-sideline speed, creating a few broken plays and tackles for losses on the day. Between OTAs and my first few days of camp, I find Hayes ending up in my notes fairly often (and that’s a good thing!).

— Malik Harrison created some buzz and had a ‘sack’ in the backfield as well, today. I love seeing Harrison used to create pressures… hoping to see more consistent usage in that aspect come September!

— Trace McSorley started the day hitting his receiver… in the ankles… followed by a few airmailed passed before he started to get comfortable. I know I knock McSorley harder than most but in a tight QB2 race, his lack of consistency is concerning and it seems most of his highlight reel in camp is in red zone drills more than scrimmages when he’s under duress…

— Tyler Huntley (you had to know I’d go here next) dropped a few dimes deep today, but the best ball he threw was down the near sideline to Mark Andrews for about 30-35 yards. Andrews bobbled the pass and ended up completing the catch… out of bounds. Won’t show up on the highlight reel, but it was a great ball thrown by Huntley.

— Eli Wolf is apparently Huntley’s favorite target, as Wolf reeled in a handful of passes on the day, notably one catch in which Wolf broke down the left sideline and found himself all alone for a wide open score.

— I mentioned Bateman making up for his drop… a beautiful sideline grab in which he had to scramble his way open when Huntley was under duress? That did it for me. Shaking defenders loose isn’t something we’ve seen a ton from the Ravens wideouts in years past. The kid is going to be special.

— Notably a lot more shotgun work today from the Ravens. Not sure if it’s worth reading into, though.

— Shells are so tough to gauge when you can’t pop pads. Defenders pull up and allow receptions that would otherwise get blown up… can’t get a feel for certain pass rush moves or any banging around in the trenches, running backs can’t show off ability to bounce around in traffic… so we do what we can with what we see, which is always going to be pass heavy. Once we get the pads going, I’ll have better chatter on the pass rush and trenches, without a doubt!