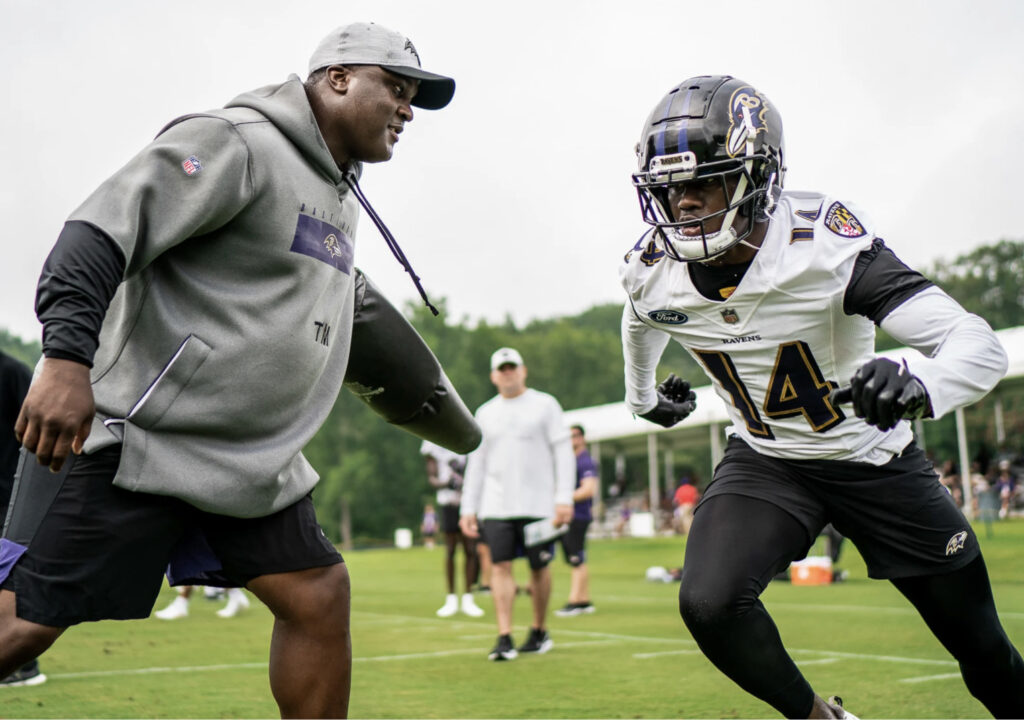 The Ravens held a fairly crisp, scrimmage-heavy practice on Friday morning, highlighted by some high-flying catches, a gravity-defying interception and some impressive flashes by a few young players hoping to make their mark on this year’s team.

It was a new addition in the form of a veteran receiver, however, who appeared to stand out the most.

Sammy Watkins made several impressive plays throughout practice, working both the sidelines and the middle of the field. He took one short crosser from quarterback Trace McSorley, catching the ball in stride and immediately turning up the field in a play that looked like it had the potential to be a big-gainer — though much of this is based largely on speculation since the players were in shells again this morning, and contact was about as welcomed as an attendee in a Steelers jersey and a Titans hat.

Let’s rip through some other observations from the Castle this morning.

— Rashod Bateman, Josh Oliver, Mark Andrews and Benjamin Victor all made some nice plays during practice, joining Watkins on the receiving side of things. Bateman brought in a fade for a touchdown during red zone drills, and Andrews made a leaping catch for his own score during the same period. Andrews also made a falling, juggling catch on a deep ball, but ultimately landed out of bounds. Still, pretty darn impressive. Oliver — and we’re all holding our breath on his health — looks particularly smooth, both in his routes and snatching passes. Victor is one of those guys who “just looks” like a good receiver, using his height, hands and athleticism to bring in catches. Another guy who impressed was Devin Gray, whose quick feet seem to buy him some separation very quickly.

— I watched the offensive line go through drills for a little while, and Kevin Zeitler really stands out — not in a massive-form-of-humanity-kind-of-way like fellow guard Ben Cleveland, but more so technically. He got an approving nod from line coach Joe D’Alessandris after each rep, while nearly every other lineman received at least some instruction from the technical-oriented coach. Cleveland, by the way, impressed in another way — he appeared to take every bit of instruction from his coach seriously and showed instant improvement his next rep. In an aside, I didn’t see any poor snaps from center today, but I certainly didn’t catch each snap as the early part of practice was spread out across the facility in groups.

— McSorley and Tyler Huntley took the vast majority of snaps at quarterback, and both had their good moments — with some small bits of inaccuracy sprinkled in throughout the day. McSorley had a very impressive red-zone period, while Huntley consistently shows a better arm and athleticism. I’d give the nod to McSorley today because he took a few more shots downfield, but it’s impossible to ignore Huntley’s superior ceiling. Huntley also broke through for a long run that sparked the fans in attendance.

— Defensively, there were a few impressive highlights, but my favorite was a leaping pick by Nigel Warrior deep downfield where he wrestled the ball away from the receiver (who I could not pick out from my vantage point). It was not Warrior’s only nice play of the day, either, as he earned notes a couple times in my pad throughout practice.

— I love watching Jimmy Smith work, and he was impressive again today. He has such a smooth back-pedal, before exploding in to break on the pass. He looks like what a cornerback should look like in a teaching video. Marcus Peters and Marlon Humphrey also showed sticky coverage, with Humphrey reaching in at one point to break up a pass for Bateman in the end zone. Shaun Wade made a nice play breaking up a fade in the corner on a play wg=here he initially looked beaten.

— Justin Madubuike, by the way, really looked the part of that second-year player to whom so many have attached their expectations on this season. He knocked down a pass with ill intentions to elicit a gasp from the crowd at one point, and had another play where he broke through the line and forced Huntley to haul buns to the sideline. Odafe Oweh picked up the pursuit when Huntley got out of the pocket and… well, let’s just say the defense won that rep emphatically.

— Daelin Hayes was extremely active, moving up and down the sideline with ease and pretty much destroying every outside run that he saw while on the field. I counted five separate plays in my notes where Hayes stood out. Also littered across my scribbles was undrafted safety Ar’Darius Washington, who blitzed with great effectiveness and was consistently involved in run defense. He is certainly no lock to make the roster, but if he does, expect him to be involved in the muck from the slot. He does a nice job slicing through traffic and finding the ball.

— Malik Harrison flashed several times and would have had a sack today if, you know, they were playing tackle football. Calais Campbell immediately greeted Harrison on the sidelines after he came off the field, and you could tell the two were enjoying the moment. I’m guessing this was something the two had discussed before.

— Another guy who flashed a few times this morning was linebacker Kristian Welch. For a young guy trying to make his mark in the league, practices like today go a long way.

— While watching the linebacker drills, it was just so obvious how smooth Tyus Bowser is dropping into coverage. Obviously, the Ravens — and the fanbase — would like to see an improved pass-rush from Bowser, but don’t sleep on his ability to disrupt the quick-passing game that so many offenses turn to when they face the Ravens’ confusing defense.

— Ty’son Williams runs aggressively when given the ball. It’s just hard to see a scenario where the young running back would get many options with this team, barring injuries.

— Overall, the coaches seemed pretty satisfied with this morning’s practice. This is a staff that is bent on attention to detail, and you can see a lot of teaching going on with each group. But I never really caught any moments of a coach flipping out or showing visible frustration.